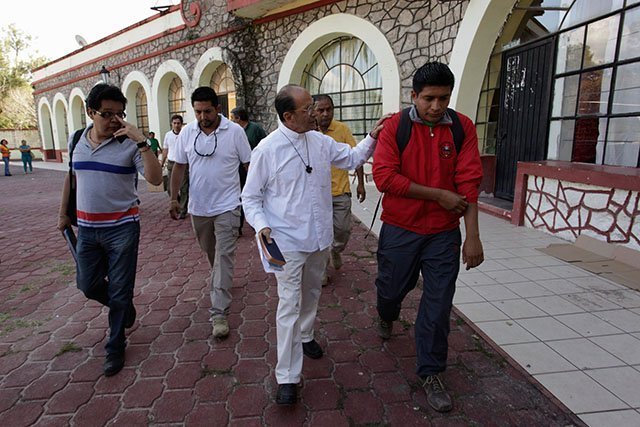 MEXICO CITY (CNS) — The Archdiocese of Mexico City called for a "reconstruction of the country" in response to the disappearance of 43 teacher trainees in an act that authorities allege was authored by a mayor and his wife and carried out by police working alongside an organized crime network.

"The evil that Mexico suffers is a true decomposition of the social fabric, an evil from which no sector of the country escapes," read an Oct. 27 editorial in the archdiocesan publication Desde la Fe.

"The seriousness of the crisis demands a deep replanting of our morals, our laws and the social and political organization of our homeland."

The teacher trainees went missing Sept. 26 in Iguala, 120 miles south of Mexico City. Classmates and authorities said the students went to collect money for a trip to the capital, but were pulled over, shot at by police, detained and turned over to a criminal group known as Guerrero Unidos.

The disappearance of so many students has stirred outrage in Mexico and forced the federal government to again address the issue of crime, which continues plaguing parts of the country despite President Enrique Pena Nieto staying silent on the issue as he focused on economic development instead.

"The remedies have not worked, the official discourses full of falsehoods and hypocrisies only irritate society," the newspaper editorial said.

"It is necessary to reconstruct the country. It is urgent that there be a commitment from all sectors of society to combat the immorality, impunity, corruption and cynicism that has our nation on its knees and covered in shame," it continued.

"The political class has showed itself to be unworthy and their parties have shown themselves to be totally incompetent for such a large task."

Authorities said organized crime paid the mayor of Iguala and his wife — whose whereabouts remain unknown — more than $200,000 per month and plied the police with more money. Political observers say the collusion is unsurprising and increasing in some places as politicians on the local level are often unaccountable and feel free to act with impunity and without oversight.

"In local government, people only arrive to be corrupted," said Ilan Semo, political historian at the Jesuit-run Iberoamerican University.

"There’s now confusion between the political structure and organized crime. It’s no longer simple protection (for crime and cartels). It’s an alliance,"

The situation of insecurity and criminal infiltration is especially grave in Guerrero state south of Mexico City, one of the country’s most impoverished areas, according to observers such as Semo.

Dioceses have responded to the insecurity by promoting programs for attending to the victims of violence. But insecurity also has affected the Catholic Church. Comboni Father John Ssenyondo, a native of Uganda, disappeared April 30 and his whereabouts remain unknown. Father Victor Manuel Aguilar, spokesman for the Chilpancingo-Chilapa Diocese, said a refusal to pay extortion is suspected in his disappearance.

"It’s a state that really has been rough," said Father Aguilar, whose diocese includes Iguala and the school the teacher trainees attended.

The students had been at odds with the state government over funding issues and wanting to close their school and no longer guarantee jobs for graduates. The students have a history of protesting perceived injustices and angering public officials with their actions. In the past they have commandeered buses and blocked the Mexico City-Acapulco highway.

Father Aguilar said the diocese has been responding to the students and their families by celebrating Mass at the school and providing pastoral care.

Some church attention has been spurned, however. Father Alejandro Solalinde, a priest known for his activism and attention to migrants transiting Mexico, has insisted in interviews that some of the missing students were murdered and burned alive. He was turned away by the students Oct. 26, when he planned to celebrate Mass because families were unhappy with his comments, Mexican media reported.