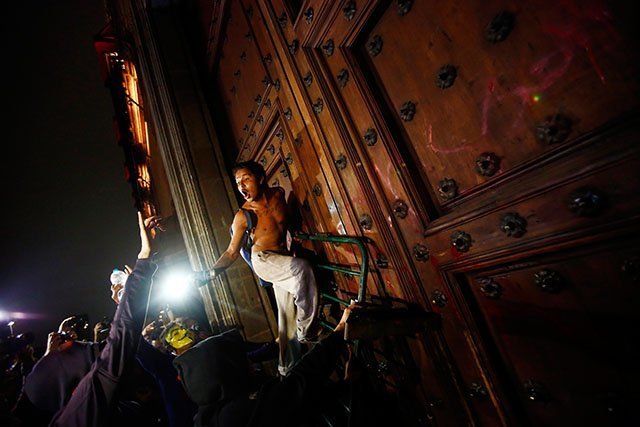 A protester climbs up a barricade leaning on the wooden door of Mexican President Enrique Pena Nieto's ceremonial palace Nov. 8, during a protest denouncing the apparent massacre of 43 trainee teachers. The door was later set on fire.

At the end of his general audience at the Vatican Nov. 12, Pope Francis said he wanted to express to the Mexicans present in St. Peter’s Square, "but also to those in your homeland, my spiritual closeness at this painful time."

While the students are legally missing, "we know they were killed," the pope said. Their disappearance and deaths "make visible the dramatic reality that exists behind the sale and trafficking of drugs."

The Mexican bishops’ conference, meanwhile, issued a statement of solidarity with the families, who refuse to accept the authorities’ explanations and continue calling for their children to be brought back alive.

"Adding our voice to theirs and to all of society, we say, ‘Enough with so much corruption, impunity and violence,’" the bishops said in a Nov. 7 statement.

"Respectfully and energetically, we ask the authorities to take the investigation to its final consequences so that it’s known with certainty what has happened with the disappeared and the intellectual authors … are punished with the full weight of the law," the statement continued.

"At the same time, we demand the enforcing of the rule of law to put an end to all forms of violence, illicit activities, corruption, impunity and the complicity of some authorities with organized crime."

Everyday Mexicans have taken to the streets, condemning the crimes committed against the students and the apparent collusion between criminals and the political class in parts of the country.

The protests and outrage are among the strongest in recent years and reflect anger with the ongoing insecurity in the country. Many have adopted the slogan, "I’ve had enough," echoing off-the-cuff comment of Mexico’s Attorney General Jesus Murillo Karam after a Nov. 7 news conference that has been interpreted by many as insensitive.

"It was the straw that broke the camel’s back," said Jesuit Father Conrado Zepeda, who celebrated Mass Nov. 4 at the Jesuit-run Iberoamerican University for students and four family members of the missing.

"It has to do with the young, students, the poor, people unable to defend themselves being attacked in this way. This is why civil society has revolted."

Authorities arrested Jose Luis Abarca, mayor of Iguala, and his wife, Maria de los Angeles Pineda, Nov. 4 in Mexico City, alleging they ordered the attack on the students. The couple claimed the students were coming to protest a community event planned by Pineda.

Classmates said the students went to Iguala, 120 miles south of Mexico City, to collect funds for a future trip to the capital, but had their borrowed buses shot at by police — who detained 43 of the teacher trainees and handed them over to members of the Guerreros Unidos gang.

Murillo spelled out the details Nov. 7, saying three gang members confessed to burning the bodies in a garbage dump. Six bags of ashes and bones have been discovered at the site.

Families of the missing students refuse to believe the government and said they only will accept evidence presented by Argentine forensic experts working on the case.

Father Victor Manuel Aguilar, spokesman for the Diocese of Chilpancingo-Chilapa, where the students’ school is located, said the mistrust comes from an unhappy history of human rights abuses in Guerrero state, which is south of Mexico City and full of impoverished, indigenous communities that have been exploited and pushed to the society’s margins for centuries.

"Justice is often delayed … if it arrives at all," he said.

The case has caused outrage and a political crisis for President Enrique Pena Nieto, who had stopped speaking on security matters in an attempt to improve the image of Mexico as an investment destination.

"There has never been a rebuke like now," Father Aguilar said.

Pena Nieto — who has not visited Iguala or the students’ school since the tragedy, but departed for an overseas trip Nov. 8 — appears to have been caught flat-footed. He has proposed an all-party pact to curb crime and corruption. While not unlike the consensus he achieved to approve 11 structural reforms in areas such as education, energy and taxation, it has found tepid support.

Catholic leaders have called for a change in Mexico, even though they are seen in some cities as part of the establishment — rubbing shoulders with prominent politicians and businessmen and staying silent on issues such as insecurity and corruption.

"The reality of our present-day Mexico did not surge from one year ago or five years ago," Bishop Francisco Moreno Barron of Tlaxcala told the Reforma newspaper. "It has been gestating for a long time through corruption and impunity and I believe that it’s time to put a stop to it."

Protests have continued, especially in Guerrero, where students and their supporters have burned government buildings, blocked highways and marched through the tourist zone of Acapulco. Father Aguilar sees the protests continuing as long as the students’ whereabouts remains uncertain.

"We all want the student to appear alive. But it they don’t appear, I think that this discontent could become radicalized," Father Aguilar said.

"There are people willing to do whatever it takes to make their demands known."