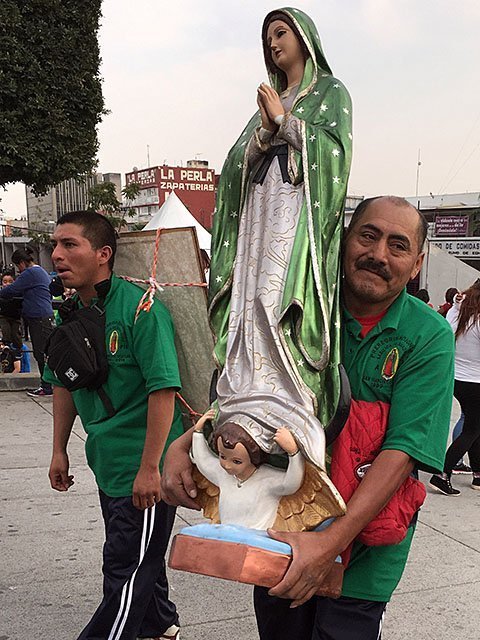 MEXICO CITY (CNS) — Dressed in green T-shirts and clutching statues of Our Lady of Guadalupe covered in plastic, a group of pilgrims from Guerrero prayed, posed for photos in front of the basilica dedicated to the national patroness, set out on a march to their hometown in the hills south of Mexico City.

They described different reasons for coming to the Basilica of Our Lady of Guadalupe on the eve of the Dec. 12 feast day, celebrated at the spot in northern Mexico City where she appeared to St. Juan Diego in 1531. The site is the world’s most visited Catholic shrine.

"For the Catholic faith," said one woman. "For the Virgin," said another. "To give thanks for the favors received throughout the year," said schoolteacher Galileo Ruiz.

When asked about the students missing and possibly murdered in their home state, Ruiz said, "It’s an opportunity to ask for the appearance of the 43," citing the number of teacher trainees who disappeared in September.

One of the trainees has been confirmed dead based on DNA evidence, according to the attorney general’s office.

The Mexican bishops’ conference called for a day of prayer Dec. 12 and planned to celebrate Masses throughout the country. Mexicans have shown outrage over the way the students were captured by crooked cops and handed over to cartel criminals acting on the orders of a corrupt mayor and his wife.

Prelates and pilgrims express mixed opinions on whether Mexicans will turn a day dedicated to devotion, merrymaking and personally repaying favors into an opportunity for reflection.

"Our country is in crisis," the bishops said in a statement. "Inequality, injustice, corruption, impunity and complicities and indifference have plunged us into violence, fear and desperation. Many Mexicans have demanded justice and peace. … We are all part of the solution for building a nation in which the life, dignity and rights of every person are valued."

Devotion to Our Lady of Guadalupe has stayed strong in Mexico, where she is credited with converting the masses to Christianity and has become an integral part of national identity even for many not calling themselves Catholic.

A poll by Gabinete de Comunicacion Estrategica found 69 percent of Mexicans identifying as devotees of Our Lady of Guadalupe. In Mexico, 83 percent of the population is Catholic. Of the respondents, 52.8 percent said they knew someone who had experienced an intervention from Our Lady of Guadalupe; 79 percent believe Mexicans pray more to her than any other saint; 28.2 percent considered her a symbol of national identity.

Guadalupe brings, "a signal of national identity, of unity in our faith, so the virgin is not just any other saint," said Father Hugo Valdemar Romero, spokesman for the Mexico City Archdiocese.

He said many Mexicans turn to faith in tough times, even though there is an element of release in the "fiestas" every Dec. 12.

In the crime-ridden barrios above Acapulco, Father Jesus Mendoza said people would celebrate Our Lady of Guadalupe like always, but with a focus on finding peace.

"We’re doing the same as always, but with this focus," said Father Mendoza, pastor of St. Nicholas of Bari Parish. "All that we do will have this focus on peace and providing attention to victims, the dialogue and reconciliation that needs to happen there."

Families of the missing students pray for their reappearance at a shrine to Our Lady of the Guadalupe on the campus of the school their children attended. They have marched from the school to Mass in Chilpancingo carrying banners of the patroness and even traveled to the basilica in Mexico City.

"We’re also including the many people (in our prayers) that have disappeared over the last few months and years because the disappearances of these young students … haven’t been the only cases," says Father Victor Manuel Aguiar, spokesman for the Diocese of Chilpancingo-Chilapa, home to the missing students’ school.

Yet the plans for prayer and special services appear out of step with the intentions of some devotees, such as Arturo Vazquez, a pilgrim from Guerrero, who came to the basilica to give thanks for intervention he said helped him stop drinking.

"It’s been two years and I’m going for more," he said prior to joining a run from the basilica to his town some 200 miles from Mexico City.

"It’s something apart, something independent" from the celebrations, Dr. Arturo Mora, a physician also participating in the run, said of the student tragedy.

At least one priest said he sees similar attitudes among his parishioners, who haven’t once spoken up in intentions during Mass for the missing students, despite being prompted.

"They’re very badly misreading the people if they think that they can take Our Lady of Guadalupe and turn it into a day when people will be demanding social change or something," said Father Robert Coogan, an American priest in Saltillo in northern Mexico.

Father Coogan said many in his parish pray the rosary for 46 straight days — one for each star on Our Lady of Guadalupe’s mantle — during the lead up to Dec. 12.

"It’s the sign of hope," he said of the sentiments for many. "It’s a day when you’re in your mother’s arms."

Tags: Feast Days & Saints
Copyright © 2023 Catholic News Service, Inc. All rights reserved. Linking is encouraged, but republishing or redistributing, including by framing or similar means, without the publisher's prior written permission is prohibited.