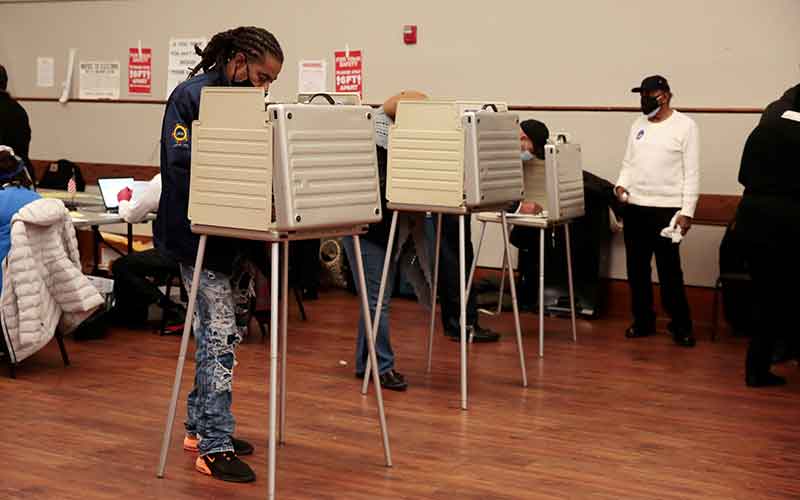 Voters at a polling station in Detroit, Mich., fill out their ballots Nov. 3, 2020. (CNS photo by Rebecca Cook/Reuters)

LANSING, Mich. (CNS) — In a Sept. 8 order, the Supreme Court in Michigan said voters will decide in the upcoming November elections if a woman’s right to an abortion can be part of the Michigan Constitution.

If voters approve the abortion amendment, they would strike down a state’s 1931 law that makes it a crime to perform most abortions. That law was suspended in May and a judge in September said the law was unconstitutional.

The Michigan Catholic Conference, public policy arm of the state’s Catholic bishops, urged voters to vote against the proposal in November.

“We are committed to defeating this extreme proposal that allows abortions up to the moment of birth and invalidates every common sense limit on abortion, such as parental consent, health and safety regulations on abortion clinics, and more,” the Catholic conference tweeted Sept. 9.

A Michigan elections board in late August reached a stalemate along party lines about placing the abortion initiative on the ballot.

Two Republican members on the board said they wouldn’t certify the proposed amendment because they objected to the spacing in the proposal and also its readability.

Michigan Supreme Court Chief Justice Bridget M. McCormack, said in a statement that went along with the 5-2 order, that the actions of the opposing members on the elections board was “a sad marker of the times.”

She pointed out the wording was legible and in the correct order.

Michigan Right to Life urged voters to vote no on amendment

The proposed amendment had more than 700,000 signatures supporting it.

Michigan Right to Life, like the state’s Catholic conference, is urging voters to vote no on the amendment called Reproductive Freedom for All.

On its website it said the amendment “is not about reproductive freedom, which already exists” and that the amendment “would radically distort Michigan’s Constitution to create a new unlimited right to abortion, which would spill over and affect many other issues.”

The group also said the “poorly worded amendment would repeal dozens of state laws, including our state’s ban on tax-funded abortions, the partial-birth abortion ban, and fundamentally alter the parent-child relationship by preventing parents from having input on their children’s health.”