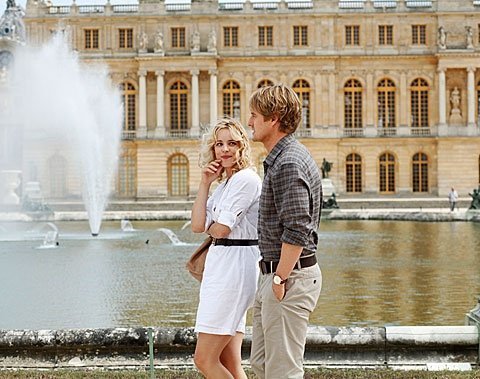 NEW YORK (CNS) — Writer-director Woody Allen extends his European sojourn to spend "Midnight in Paris" (Sony Classics). The result is a romantic comedy that registers as a sumptuous valentine to the City of Lights.

Amid all the sightseeing, haute cuisine, and fine wine on screen, though, Allen poses a serious — if necessarily rhetorical — question: Would you be happier living a different life in a long-ago, mythically remembered past?

The answer finds Allen revisiting the make-believe themes of "Zelig" and "The Purple Rose of Cairo," as famous figures from the literary and artistic worlds of the 1920s mingle with a perplexed but enchanted visitor from the present.

Gil (Owen Wilson) is a frustrated Hollywood screenwriter who dreams of penning the great American novel. He travels to Paris with his pretentious fiancee, Inez (Rachel McAdams), and her obnoxious parents, Helen (Mimi Kennedy) and John (Kurt Fuller).

They are your standard ugly Americans abroad. "There is no city like this in the world," marvels Gil. "You’re living in a fantasy," Inez snaps in reply.

Turned off by his companions’ criticism — as well as by Inez’s boorish, know-it-all friend Paul (Michael Sheen, who nearly steals the movie) — Gil wanders the streets alone. As the clock strikes midnight during one such amble, he’s invited into an antique taxi.

Like a latter-day Alice, Gil falls down a metaphorical rabbit hole into his personal version of Wonderland: Paris between the wars, a metropolis filled with his idols, including Ernest Hemingway (Corey Stoll), F. Scott Fitzgerald (Tom Hiddleston), and Gertrude Stein (Kathy Bates).

It’s all one big, raucous party, flowing with wine, women, song and unselfconscious cigarette smoking. Gil returns nightly, and is soon on a first-name basis with his newfound friends. Stein critiques the manuscript of Gil’s novel, while Hemingway offers him macho relationship advice.

To Gil, it’s a dream come true. "Real things happened to people in the past," he says. Romance, it seems, not least among them, as Gil falls for Adriana (Marion Cotillard), the mistress-muse of Pablo Picasso. She, too, is a dreamer, longing for a different life.

When temptation rears its ugly head, the past offers a new perspective on the present, and Gil seeks a way back to the future, on his own terms.

"Midnight in Paris" feels, at times, like an extended infomercial, a beautifully photographed travelogue that captures the French capital’s charm, style, and mystique. It’s a pretty film filled with pretty people, extending even to the first lady of France, Carla Bruni, who has a (totally forgettable) cameo as a museum guide.

Whether there’s a subway of substance running, Metro-like, below this glittering surface, however, is another question.

The film contains at least three uses of profanity, some sexual and drug-use references and frequent alcohol consumption. The Catholic News Service classification is A-III — adults. The Motion Picture Association of America rating is PG-13 – parents strongly cautioned. Some material may be inappropriate for children under 13.