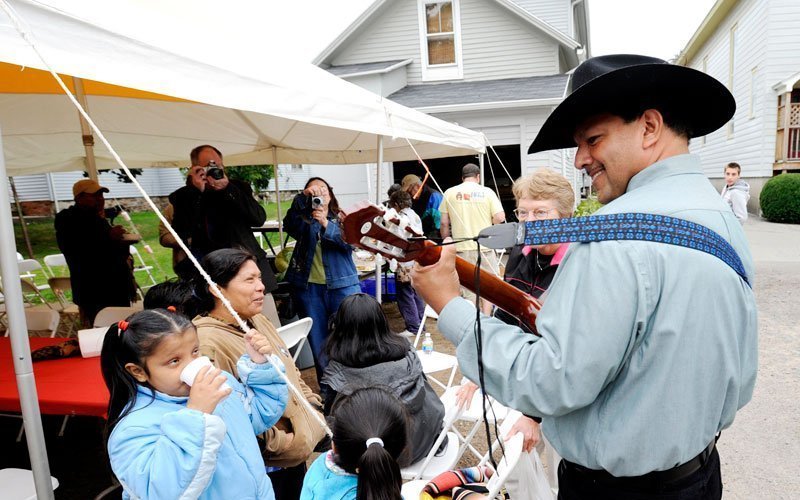 SODUS — It wasn’t a huge celebration, but it was a significant one for the founders of and people served by La Casa, a migrant-housing center.

The fifth anniversary of the home that offers immigrants — primarily migrant workers from Mexico — a temporary place to stay was marked Sept. 26 with an open house, food prepared by some of the residents and music from community members.

Ruth Castillo, a migrant worker originally from Texas, is a current resident. She said that La Casa, which offers eligible residents housing for three months, is a “once-in-a-lifetime thing.” Without that option, Castillo, 24, said that she doesn’t know what she would have done after her car broke down and she was faced with deciding between paying to get it fixed or paying her rent.

By living at La Casa, she’ll now have a vehicle so she can make her trek to Florida this fall, she added.

“It’s great for people,” said Castillo, who currently works at Great Lakes Kraut Co. in Shortsville. “Something like this can help out.”

Also during the celebration, Deacon Timothy Sullivan, executive director of Catholic Charities of Wayne County, presented Mercy Sister Janet Korn with a plaque for her “substantial role in the founding and sustaining of La Casa.” Sister Korn, who is social-justice awareness coordinator for diocesan Catholic Charities, also received a framed photo of the home.

“It has been my great pleasure to work to provide a home where (immigrants) can feel welcome,” she said. “It’s a place where they feel safe and secure. … May it always continue that way.”

Deacon Sullivan added that for the past five years, Sister Korn has worked behind the scenes to raise money and secure grants to keep La Casa afloat as well as arranging for volunteers. None of the people involved in creating La Casa can believe five years have passed, he said.

“It’s really been helpful,” Sullivan said. “A lot of people come here with no place to live. (La Casa) provides them some stability and safety until they can get their life in order.”

Christine Guyette-Vienna, who runs a Catholic Charities clothing center in Wolcott, added that Sister Korn’s work in creating La Casa was a labor of love.

“She is a crusader for the underdog,” Guyette-Vienna remarked. “She defines advocacy in word and deed.”

Guyette-Vienna said that she worked with Sister Korn to procure one of the grants that helped make La Casa a reality. Bishop Matthew H. Clark dedicated La Casa — a joint project of Catholic Charities of Wayne County and diocesan Catholic Charities’ Project Unity — in October 2004, but residents did not start living there until January 2005 after Wayne County issued a certificate of occupancy for the home.

Volunteers from more than 60 parishes and two paid staff helped renovate the house — including asbestos and lead-paint removal ‚Äì to prepare it for residents. The two-story house has a studio apartment, a three-bedroom apartment and two two-bedroom apartments.

Peter Mares, an outreach worker for Catholic Charities of Wayne County, manages La Casa’s day-to-day operations and uses the studio for an office. Deacon Sullivan noted that Mares has become an ambassador to the Hispanic community through his work for La Casa.

“He’s become a fixture, someone people know they can count on for help,” Deacon Sullivan said.

Mares said that he house has welcomed about 35 to 40 families and individuals annually since it opened its doors. Volunteers continue to come to help with maintenance of the house as well as landscaping and even helped organize the open house celebration and raffle, he said.

Mares noted that he asks no questions of the residents who come seeking shelter other than if they are working in the farming industry. Many of the residents are referred by other agencies or through word of mouth, he added.