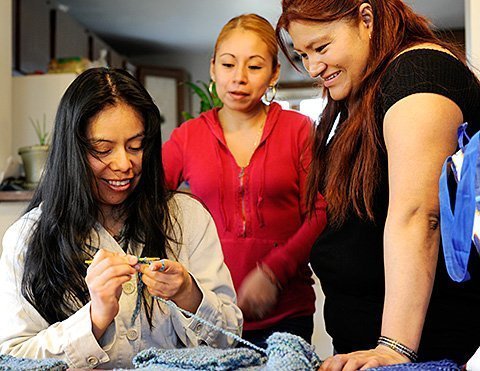 Elizabeth Medina (from left) helps Adriana Alatriste and Marta Aguilar learn the basics of crocheting March 11 in Piffard, where a group of migrant women meet regularly to practice knitting skills.

Such a formula appears to work perfectly for the group of migrant women who have taken on knitting as part of activities that began last summer. The women, who have known each other for years, decided to meet more regularly after they took on the more serious task of offering input for the Diocese of Rochester’s Hispanic-ministry plan, explained Penny Gardner, a diocesan migrant minister.

Following that work, the group developed a list of activities they wanted to try, she added, which included exercise, Bible study and knitting.

Mary McMahon and Jean Moody, with Livingston County Literacy Volunteers, offered to teach them knitting, Gardner added. Both women helped out at the first session in December, she said. McMahon — who became familiar with the migrant community when her husband, Tim, was director of Catholic Charities of Livingston County — has continued coming out to the sessions at the home of Marta Aguilar.

"She is a good teacher," Elizabeth Medina said of McMahon. "We all learned."

When they got together on March 11 at Aguilar’s house on a country road surrounded by corn fields, the women all showed off what they had knitted since the last session, including colorful hats, a purse, lots of scarves and baby blankets.

While McMahon is not a Spanish speaker, she knows a few phrases and complimented the women’s knitting. She said that she has picked up more Spanish teaching knitting to the Mexican natives.

"My problem as a teacher is I’m limited in my language," McMahon noted. "I’m on the fly."

When she looked at Medina’s handiwork, she remarked, "Que bueno." ("Good job.")

"Very pretty. If I had time, I’d learn along with you," she added.

Martínez was on hand to give an English as a second language lesson, which also has become part of the group’s activities.

As she observed McMahon showing a technique to stitch together a row so the yarn wouldn’t pull out, Martínez said that the group’s enthusiasm about knitting is contagious.

"It’s wonderful," she said of the group’s energy.

Adriana Alatriste said that the women appreciate Gardner’s efforts to organize the group’s activities as well as the guidance of volunteers such as McMahon and Martínez. She said that the women have known each other for about four years and would get together occasionally before Gardner brought them all together last year for this new group.

When the idea of knitting was raised, all the women were interested in learning how to do it, Alatriste added.

"We never had the chance (before then) to learn," Alatriste said. "We appreciate being able to get together and learn something."

"I like doing this because I didn’t know how to knit at all," she said. "(Now) I can sit for a while … listen to the television as I knit and relax. And we’ve learned a skill."

McMahon said that she has enjoyed working with the group as well.

"It’s been such fun," she added. "I see that they don’t have the opportunity to interact with the community at large. They’re so lively and interesting. And they have taught themselves a great deal more than I have."

Indeed, some of the women asked McMahon about crocheting, which a couple of them picked up by watching videos online and by looking at books from the library, added Gardner.

As Medina tried to help Aguilar pick up some basic crochet stitches, they giggled at the table in Aguilar’s dining room, where the sessions usually take place.

"This is much harder than it looks," Aguilar said.

"It’s going to take you an hour to make a short row," Medina teased.

Next up was a makeover session that the ladies hoped would include the newest member of the group — the newborn of a group member who was expecting and wasn’t able to attend that day, Gardner said.

The women also have asked for parenting classes, which Gardner is trying to arrange.

"We want to create these opportunities for them to get together and do things they all enjoy," she said.