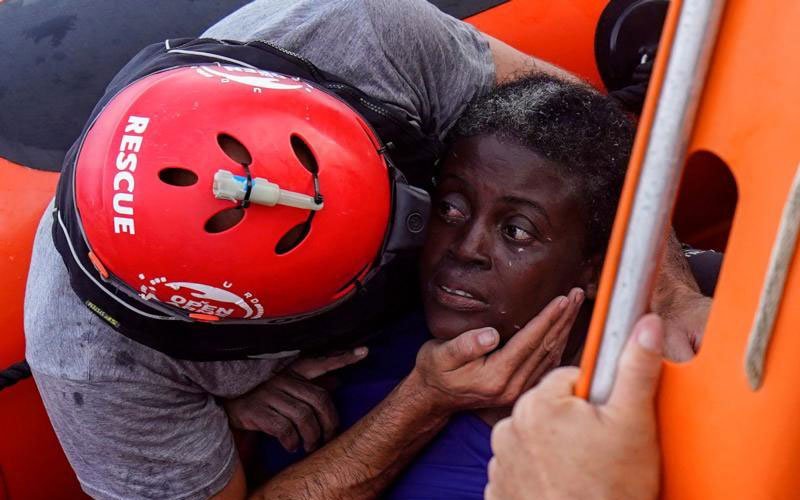 A crew member of the Spanish nongovernmental organization Proactiva Open Arms comforts a rescued African migrant July 17 in central Mediterranean Sea. The main mission of the NGO is sea rescues of refugees that arrive in Europe fleeing wars, persecution or poverty. (CNS photo by Juan Medina/Reuters)

ROME (CNS) — Tweeting with hashtags that translate as “Closed ports” and “Open hearts,” Italy’s interior minister disputed claims that the Italian government was complicit in leaving a migrant to die in the Mediterranean Sea as she clung to a board from a destroyed fishing boat.

Matteo Salvini, the minister, has given strong support to Italy’s policy of having the Libyan coast guard patrol its own shores, pushing back refugee boats or taking the migrants and refugees back to camps in Libya.

He also has worked to prevent rescue boats from docking in Italy until other European countries agree to take a share of the migrants onboard.

Salvini and others credit the Italian policy with leading to a sharp decline in the number of migrants and refugees arriving on Italy’s shores. The 17,838 migrants and refugees who arrived between Jan. 1 and July 18 represent an 86.5 percent decline from the number of arrivals in the same period in 2017 and an 84.8 percent decline compared to the same period in 2016, according to figures compiled by the Department of Public Security and posted on the Interior Ministry website July 18.

But the numbers did not bump from the front pages of Italian newspapers the photographs of Josefa, a migrant from Cameroon, being pulled from the Mediterranean July 17 by rescuers from the Spanish organization Proactiva Open Arms. The organization said it also pulled from the water the dead bodies of a woman and a child.

The organization accused the Libyan coast guard of attacking the boat the refugees were on and leaving some of the migrants to die.

A Libyan official said it intercepted a boat with 158 people on board July 16; the migrants were transferred to a coast guard vessel, given food and medical attention and returned to Libya. The boat was destroyed to prevent other smugglers from using it, the Libyans said.

After Proactiva accused the Italian government of being complicit in the abandonment of Josefa and in the deaths of the two people pulled from the sea, Salvini on Twitter accused the organization of “lies and insults” and said that what happened “confirms we are right: reducing the number of departures and arrivals means reducing deaths, reducing the earnings of those who speculate on clandestine immigration.”

Salvini, who has been deputy prime minister and interior minister since June 1, has insisted on a hardline policy limiting immigration. The policy relies both on turning migrants and refugees back to Libya and on forcing member countries of the European Union to contribute to the care of migrants and refugees, who tend to reach land in Italy, Greece, Malta or Spain.

Like other church commentators, Msgr. Robert J. Vitillo, the Geneva-based secretary-general of the International Catholic Migration Commission, noted how Salvini’s actions and comments came so close to the fifth anniversary of Pope Francis’ first trip outside of Rome as pope. The pope visited the island of Lampedusa, a major port for migrants and refugees, and he prayed there for the thousands of people who lost their lives at sea in the search for peace and a better life.

“I am left with the haunting question cited by Pope Francis, ‘Cain, where is your brother?’” Msgr. Vitillo said in an email response to questions July 18. “While states and civil society have spent countless hours in consultations and negotiations, how many more precious and invaluable lives are being lost? While we continue to fight over ‘burden sharing,’ how much do we recognize the contributions of refugees and migrants to host populations who welcome them? Why aren’t we talking about ‘resource sharing’ instead of ‘responsibility sharing’?”

As for the claim that Proactiva and other NGOs rescuing the migrants at sea actually entice people to set out and make smugglers’ jobs easier since they increase the possibility of a safe passage, Msgr. Vitillo suggested people making that claim need to speak with some of the migrants and refugees “who felt forced to leave their homelands in order to seek safety, security, freedom and dignity elsewhere.”

Ordained in 1972 for the Diocese of Paterson, New Jersey, Msgr. Vitillo said he has worked with hundreds of refugees and migrants in his 46 years as a priest.

“I spent much time in refugee camps and migrant processing centers,” he said. Most of the people “have told me how much they would have preferred to stay at home. Many of the refugees have shared with me the horrors of their frequent and unsuccessful attempts to leave their home countries because they saw no other way to survive.”

Today, he said, “forced migrants reveal the same circumstances —- they are responding to basic needs for survival, not any lure of ‘search and rescue’ boats!”