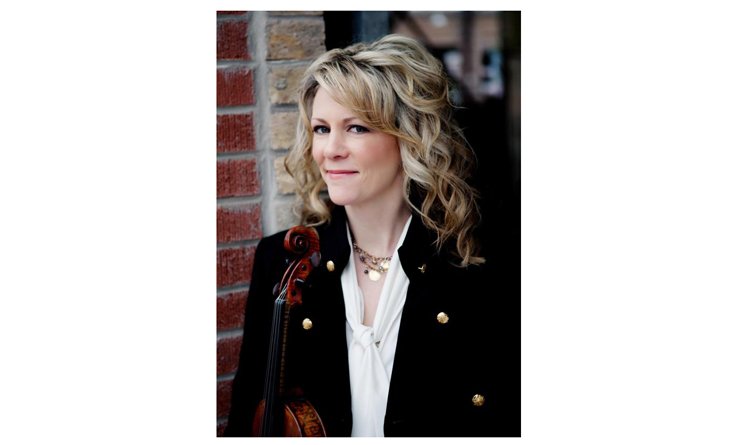 Award-winning Canadian fiddler Natalie MacMaster has reflected her Catholic faith both on and off the stage. MacMaster, 45, has been performing Celtic music since she was nine years old. (CNS photo by courtesy Natalie MacMaster)

TORONTO (CNS) — Whether St. Thomas Aquinas really said, “He who sings prays twice,” it’s true for Canadian musician and fiddle legend Natalie MacMaster, who has been using her music as prayer and inspiration for more than three decades.

“I’m not a person to be purposefully inspiring. I don’t intend to inspire,” she told The Catholic Register, Canadian newspaper, from Wisconsin, as she went through sound checks for a recent concert. “All I can offer is a sharing that this is my way of living; this is what works for me, based on how I was molded. I’m passing my experiences on to you through music and a little bit of chat. I always say, it’s never me who inspires. It’s the Lord, working through the music.”

But to hear music a person must be quiet, attentive and ready to receive whatever comes. The state of mind necessary for contemplation, for prayer and for music is increasingly rare in today’s world, said MacMaster.

“We’re living in a world where there’s a hundred million things you could be doing with your time,” she said. “It’s all around you. It’s at your fingertips.”

This does not just mean endless choices on Netflix. People often prefer distraction over quiet, diversion over keen attention and contemplation.

“There’s a problem with finding the necessary head space for any activity that requires thought,” MacMaster said. “Whether it’s for something simple or trying to write music, create music, even talk about music — or whether it be prayer life — it’s all very, very, very difficult. You just have to persevere and try to find creative ways.”

Besides juggling her touring and recording, MacMaster, 45, is the mother of seven home-schooled children living on a working farm, so she has learned to plan for prayer and plan for music.

“Music and music-related topics were constantly in my (life) every day for decades,” she said. “And then I got married (to fellow fiddler Donnell Leahy) and had the first of seven children. So it slowly takes on a new evolution. I would say my day is divided between my mind as a musician and my heart as a mother.”

Growing up Catholic on Nova Scotia’s Cape Breton Island, MacMaster simply claimed the time and space for music and prayer as her birthright. As a mother, she now works to ensure her children cultivate those habits of mind.

“We don’t have daily rosary, but we try to get at least a couple in every week. They (the children) are good at praying on their own. I try to encourage the kids,” she said. On their farm near Lakefield, Ontario, “We have a little chapel, so I try to encourage them to just go in there. Every day it’s on their list of things to do, just go in there, whether it’s 30 seconds or two minutes, and just say a prayer.”

MacMaster’s own touring schedule with her husband has taken her across several U.S. states so far this year and included a stop in Toronto for Ontario’s 50th annual Prayer Breakfast Feb. 21.

Speaking before the event, MacMaster said she saw the gathering as something quite different than an exercise in political marketing.

“Whatever happens during the prayer breakfast meeting, it’s just people being open,” she said. “If God inspires their hearts — it could be through me, it could be through one of the children, it could be just an enlightenment that God gives them while someone else is speaking, it might be just the moment — you want people in life generally to be inspired.”

Swan is associate editor of The Catholic Register, Toronto.