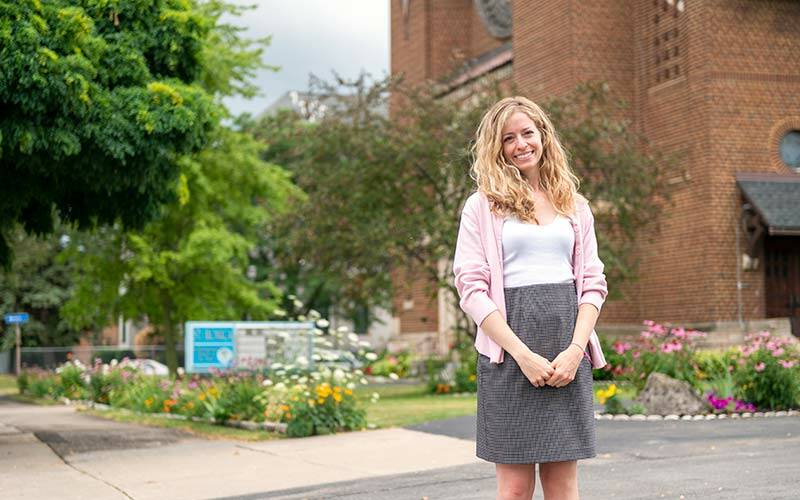 ROCHESTER — She spent more than a year working with the impoverished in inner-city Philadelphia and now performs urban ministry at a Rochester parish.

Jessica Tette has chosen workplaces surrounded by poverty, violence, addiction and despair. Yet by embracing the challenges of the city, Tette is living out her understanding of Catholic social teaching.

“That (teaching) means, to me, reaching out to people on the margins and including them,” said Tette, 32, who is director of faith formation and communications at Rochester’s St. Monica Parish. “Our faith calls us to go where there is need and walk with people.”

Living a call to ministry to places in need

Tette comes from a small-town background, having grown up in Livonia’s St. Matthew Parish. She developed a passion for Catholic ministry by working from 2007 to 2016 as a program director and in other roles at Camp Stella Maris, where her now-retired father, Raymond, was executive director for many years.

“Camp Stella Maris was a huge influence on me,” she said. “My dad always taught me to be loving and accepting. That’s how he tried to make camp, and that’s how I’ve tried to live my life.”

Tette eventually felt compelled to expand her ministerial horizons beyond Camp Stella Maris’ tranquil setting on Conesus Lake. After graduating from Nazareth College in 2012 with a bachelor’s degree in Spanish education, she taught English in Colombia and later Spanish in the Rochester City School District.

Then, during a one-week service trip to Philadelphia, Tette felt a calling to a deeper commitment in that city as “a way to live out my faith every day, by going to a place where there was a need every day.”

In 2016, she began ministering at St. Francis Inn in Kensington, a poor section of Philadelphia. Compensated only for her room and board, Tette managed the soup kitchen coordinating both colleagues and volunteers.

There, she said, workers sought to provide patrons with more than just food.

“People hunger for community as well, which they found at the inn. It felt so special to be a part of that,” she remarked.

In Philadelphia, Tette also managed a center for women suffering from addictions, mental illness, homelessness and violence, as well as a transitional housing facility for women with mental illness. She said a highlight for her was helping to reunite a woman with her estranged son after a 30-year separation.

Serving others by stepping out of comfort zone

In 2017, Tette moved back home to be closer to family while remaining in ministry. She served for two years as coordinator of children’s ministries at Irondequoit’s St. Kateri Tekakwitha Parish and began full time at St. Monica in October 2019.

“It’s just been a huge blessing to be here,” she said, noting that the parish contains a mix of urban and suburban families that prioritize neighborhood ministry.

She noted, for example, that Catholic Youth Organization activities are St. Monica’s biggest outreach in its southwest Rochester setting. She also has taken parish youths to volunteer at St. Peter’s Kitchen, where she serves as secretary of its board of directors.

Tette said she plans to remain in ministry well into the future — “continuing to grow into the person God is calling me to be, continuing to build community, learning from others who are different from myself.” She encourages more Catholics to perform service — not just young adults such as herself, but people of all ages.

“Service gets us out of our comfort zones,” she said, acknowledging that it is not easy to balance service with a life of comfort. However, she said she’s spurred by the Catholic ideal of “all are welcome” and hopes parishes everywhere will use it as a guiding principle for extensive outreach.

“The church has to be a welcoming place. It has to practice what it preaches,” Tette said. “Instead of using our faith to justify the exclusion of people, we should be working to make sure that people have human rights, dignity and love. These are the things that Jesus did.”

“Profiles in Faith” highlights Catholics in the Diocese of Rochester of all ages and walks of life who are role models for living the faith. To suggest someone to profile, email Newsroom@Catho lic Courier.com.