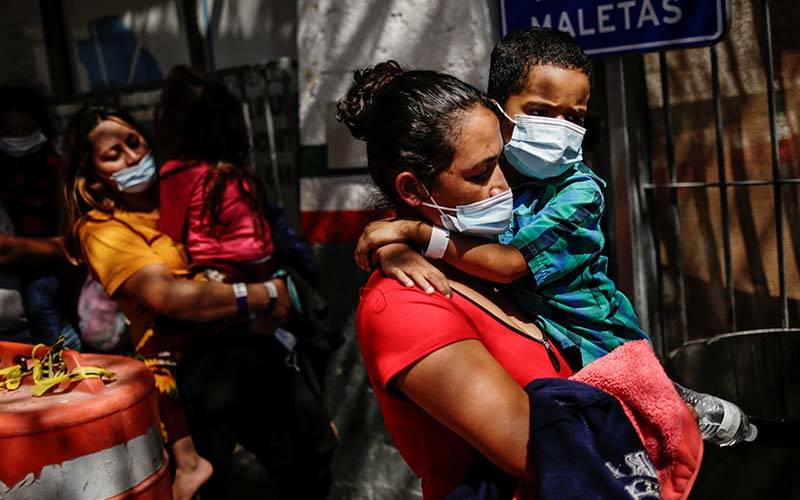 Asylum-seeking migrants from Central America who were airlifted from Brownsville, Texas, to El Paso, and later deported, walk outside a National Institute of Migration office at the Paso del Norte International Bridge in Ciudad Juarez, Mexico, March 23, 2021. (CNS photo by Jose Luis Gonzalez/Reuters)

After U.S. President Joe Biden’s inauguration, the Catholic Charities of the Diocese of Laredo, Texas, staff wondered if their immigration work would change quickly.

For years, they ran a waystation for the steady flow of immigrants and asylum-seekers crossing the U.S.-Mexico border. But when the pandemic, coupled with strict protocols and tough Trump-era immigration policies, made it nearly impossible for asylum-seekers to get court dates and even apply for asylum, Catholic Charities closed its La Frontera Shelter in Laredo.

Before then, the group joined other agencies and ran centers to help border towns like Laredo, El Paso and McAllen with the influx of migrants and refugees, who were in the country legally after traveling to the Texas border to present themselves to U.S. Border Patrol as asylum-seekers.

After Border Patrol processes their claims, they were sent from detention and processing centers to shelters like the La Frontera shelter in Laredo, where they stayed briefly before reuniting with their families across the country to await their court hearings.

Then a few months ago, when Catholic Charities was notified that migrants and asylum-seekers were once again being processed, Teresa De La Garza, an immigration specialist at Catholic Charities of the Diocese of Laredo, said procedures rapidly changed.

In accordance with COVID-19 protocols, visitors could no longer stay at the shelter unlike before, but were sent immediately to their families.

“It’s even more difficult now,” she said, citing low staffing and a lack of volunteers. “We’re trying to help even with all the changing circumstances.”

By March 24, she said she expected the U.S. government to begin processing those who had been delayed entry to the U.S. according to Migrant Protection Protocols enacted in January 2019, that allowed people to apply for asylum but sent them back to Mexico.

De La Garza also noticed a difference in the people she was helping in Laredo: They were tech savvy and had cellphones, they were younger, and there were more individuals than family units.

She also noticed the change in administration didn’t matter. Many already had plans to enter the U.S. even before Biden’s election. And the people were more diverse: In recent years they were mostly from Central America, but now she saw more Cubans and Venezuelans than ever before.

Many continue to flee gang violence, political oppression, poverty and natural disasters, even in a pandemic, according to Anna Carroll, executive director of LightForce International, an anti-sex trafficking nonprofit based in the U.S. and Costa Rica.

Carroll said her ministry has seen countless women and children pass through the Central American nation on their journey to the U.S.-Mexico border, many who experienced sexual trauma and abuse both before and during their way north. Driven by hope of a better life, and with stories from family members already in the U.S., they risk death and danger, she said.

At border camps, her team met with women to teach them how to avoid being trafficked.

“Smuggling and trafficking can become best friends, and one can often lead to the other,” she said.

Women who are pregnant find their way to San Juan Apostol Shelter in Ciudad Juarez, Mexico, near El Paso.

Founded by Father Francisco Garcia when a nearby shelter closed, the group ministers to pregnant women and children, offering the comforts of a safe home, along with spiritual care.

“If I don’t serve my brother and sister spiritually and physically, I’m not giving them a complete service,” she said. “We’re hoping that through this we’re like welcoming Christ.”

Connected to a burgeoning, supportive parish, both Father Garcia and Breceda worked to ensure the migrants have access to the sacraments. At least 13 of the children born at the center have been baptized, in addition to numerous first confessions and Communions.

Father Garcia said he was encouraged by the message of March 25, solemnity of the Annunciation of the Lord.

“The Annunciation is the good news for (migrants) and for us,” he said. “This service to migrants is the good news. We’re called to be brothers and sisters, and we see this fraternity with them. We want to live this encounter with the migrants and the most vulnerable, where they can be warm, protected and offer hope during their long journey.”

The shelter also offers all-encompassing medical care for pregnant women, before and after childbirth, and for their children, including mental health services.

“We’re just trying to live out the Gospel,” Breceda said. “It gives us hope in the sense that it’s something far beyond us. And it doesn’t end with the work that we do.”

In Laredo, De La Garza echoed a borderwide urgent need for volunteers to help the shelter prepare for the expected increase in visits from largely two immigrant groups: those locally detained and released, and the Migrant Protection Protocols cases permitted entry.

The shelter offers a place to rest with, if needed, a shower, food or a clean change of clothes. De La Garza said she hears from the migrants that they’re grateful the church is there to help them. In Laredo, they’re offered rosaries, prayer and saint cards, all small tokens of faith that can carry great meaning to those without much. When detained by government officials, many have all their belongings confiscated, including shoelaces.

Yonathan Moya, executive director of Border Perspective, a ministry that coordinates service-learning trips along the Texas-Mexico border that contextualize the immigration issue, visited the Humanitarian Respite Center in McAllen. Run by the Catholic Charities of the Rio Grande Valley, Moya said the downtown McAllen center was also stretched thin with little or no volunteers.

With news of the U.S. National Guard mobilizing to assist with the growing border crisis, Moya heard stories of people being deported under the Title 42, part of U.S. Code that permits deportations under a public health situation such as the COVID-19 pandemic.

“The border is in crisis,” Moya said. What he saw at the shelter, a room flooded with migrants and asylum-seekers, reminded him of previous surges.

“It’s extremely raw. It’s women and children that are suffering,” he said. “Regardless of their legal situation, we’re called to alleviate their suffering,” especially the most vulnerable.

“It’s hard to be hopeful in the midst of crisis,” he said. “We’re not living in it, but we choose to step into the situation and show the love of Christ to people in desperate need. Nothing on the border is ever as I expect.”