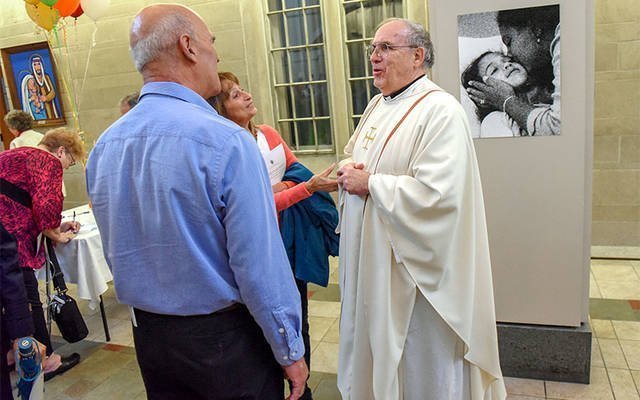 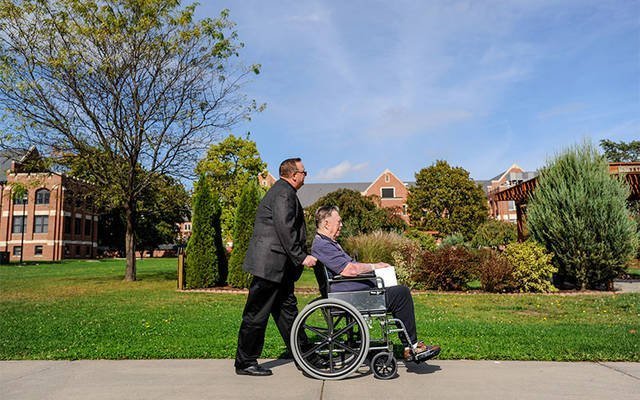 A woman struggles to deal with the emotional aftermath of an abortion.

A divorced man wonders whether his marriage was ever valid, and whether he’ll be able to remarry in the Catholic Church.

A member of the armed forces attends Catholic Mass on a military base in Saudi Arabia.

What do these three people have in common?

Each represents a facet of the population served by priests of the Diocese of Rochester.

Local Catholics are used to seeing priests ministering in their parishes, yet they may not realize that priestly ministry can take many different forms.

Father Louis Sirianni, for example, is the pastor of St. Mark Parish in Greece, but he also serves as judicial vicar on the diocesan Tribunal.

Father James Hewes served as a pastor at several diocesan parishes and directed Project Rachel, a ministry that seeks to bring about healing for women and men affected by abortion.

And Father James Jaeger currently serves as both assisting priest at St. John Vianney Parish in Bath and as chaplain at the Veterans Affairs Hospital in Canandaigua. He previously spent 20 years as a military chaplain.

After initially discerning their callings to the priesthood, each of these men assumed their ministries would be centered on diocesan parishes, but along the way they stumbled on additional ways to live out their vocations.

In the early 1980s, Father Sirianni was asked to consider getting involved with the tribunal , in advance of the 1983 revision to the Code of Canon Law. This revision made some changes to the way the Catholic Church handled annulment cases, so the diocese wanted to make sure it had enough staff to handle the increased caseload it expected, he said.

was one of several trained to become a part-time judge for the diocesan Tribunal. When petitioning the tribunal for an annulment, a person presents the reasons he or she believes the marriage in question is invalid. A judge then investigates these reasons and determines whether the marriage was in fact valid according to church law, while a defender of the bond defends the validity of the marriage and ensures that the proper process is followed, Father Sirianni explained.

Father Sirianni found that he liked the work, and his involvement with the tribunal increased over the years. He was named judicial vicar in 1996 and has been overseeing the Tribunal’s operations ever since.

“I like the challenge of being able to research and then possibly help the people get a clearer understanding of what the failure in the marriage is from, and whether or not the marriage was valid,” he remarked.

Clarifying a person’s situation will help that person — and his or her parish — to understand what next steps can be taken if the person is interested in remarrying, Father Sirianni added.

“It might not always seem pastoral because people don’t always like what they hear, but we try to be pastoral,” he said.

Father Hewes became involved in the pro-life movement shortly before he entered the seminary. He was moved to take action after attending a presentation at which he saw images of unborn children before and after abortion.

“I was blown out of the water,” Father Hewes recalled.

He helped cofound one of the first Right to Life organizations in the nation, and in 1996 became diocesan director of Project Rachel. Through this ministry, he helped dozens of women and men hurting from abortion find healing through the ministry’s focus on reconciliation and hope.

“When they come in you see the brokenness, the woundedness, the devastation,” Father Hewes said. “When they leave ‚Ä¶ there’s nothing in my priesthood more dramatic than the change you’ve seen in them.”

Father Hewes retired from his post as the ministry’s director in 2014 but remains active in pro-life issues. He currently is raising money to fund the purchase of a bus stocked with an ultrasound unit, which will be mobilized in hope of deterring women considering abortion.

Mobilization is nothing new for Father Jaeger. Both his parents worked at the VA Hospital in Canandaigua, so he’s not surprised that his own path led to chaplaincy there. At the VA Hospital he presides at Mass and ministers to older veterans as well as those in hospice or palliative care. It’s easy for him to relate to them because his own background includes active duty on military bases in New York as well as overseas in France, Germany, England, Saudi Arabia and Qatar.

As a seminarian, Father Jaeger went through basic training in San Antonio, served during the summer breaks as a chaplain on Air Force bases in North Dakota and Florida, and soon was hooked on military chaplaincy.

“The chapel was just like a home parish. There were Masses, religious-education (activities) going on, along with parish council,” he said. “We were busy around the clock from morning to night.”

After ordination, Father Jaeger became a reservist chaplain, serving first at Griffiss Air Force Base in Rome, N.Y., and later at the Niagara Falls Air National Guard Base. He served two weeks of active duty each year as a reservist and spent one weekend a month at the base, where he presided at Mass and ministered to fellow reservists.

“There were troops to be taken care of who were being deployed and returning from such duty. We were always busy with national and international missions,” he said. His ministry to service members is very similar to his ministry to local parishioners, albeit the settings are quite different, he said.

“We do the same work in different uniforms and different settings. In the parish, we wear the regular black suit and white collar. In the military, we wear the military uniform and have a chaplain’s cross on our hat and jacket. They are different ministries with the same spirit of Christ,” Father Jaeger said.