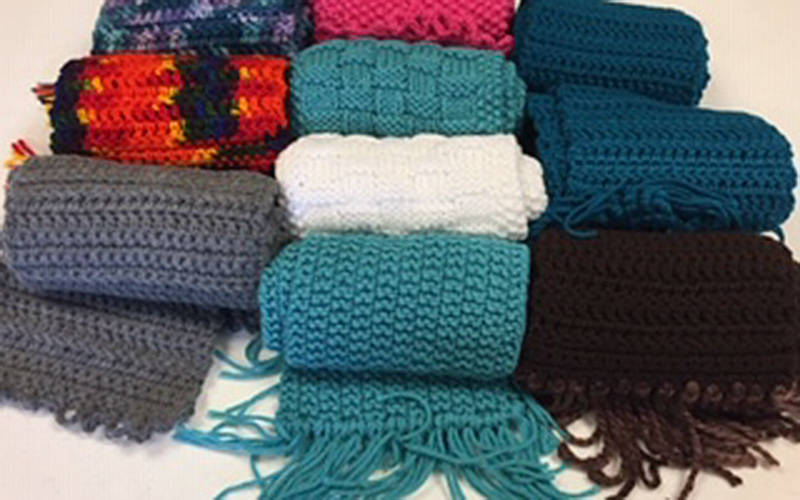 Blankets are just some of the knitted and crocheted items made by members of the Eucharia Ministry at St. Christopher Parish in North Chili. (Photo courtesy of Sheila Wimer)

Although the coronavirus pandemic has forced the scrambling of many folks’ schedules, it’s largely been business as usual for members of the Eucharia Ministry.

Over the past several months, the volunteer initiative from St. Christopher Parish in North Chili has steadily continued its mission of producing knitted and crocheted goods for donation. In fact, according to co-organizers Sheila Beers and Joanna Aguglia, Eucharia members have used their extra time at home due to COVID-19-related shutdown measures to create several thousand new items.

Begun in 2004, the Eucharia Ministry provides an array of blankets, shrugs, hats, winter wear and quilts for patients and residents throughout the Rochester region. The ministry is named in honor of Sister Carol Fox, longtime pastoral assistant at St. Christopher Parish who died in 2001; she took the name “Eucharia” when professing her final vows as a Sister of Mercy.

Items produced by the Eucharia Ministry are passed along to senior citizen residences, hospice/comfort care homes, hospitals, churches, and other health-care facilities and community organizations. Beers and Aguglia also noted that the ministry’s members knit or crochet blankets for the babies baptized at St. Christopher Parish.

Many items made by the Eucharia Ministry come attached with tags containing prayers. Not only do these donated goods symbolize a sense of caring, but they also serve practical uses, such as lap blankets for people who become cold during lengthy dialysis treatments and hats for folks who have lost hair due to chemotherapy.

“They’re just so grateful to get a homemade item,” Beers said of the recipients.

She and Aguglia said that the Eucharia Ministry regularly works with a number of organizations and also will respond to any other group that makes a request.

“We’ll serve anybody,” Aguglia said. “Whoever needs us, we’ll never say no.”

Members often pay for their own supplies, although donations of yarn and gift cards are always welcomed. Typically, participants gather at St. Christopher Church at least once a month to knit and crochet together. Since the pandemic struck last March, gatherings have been limited to the warmer months on Aguglia’s back deck. However, members have diligently continued creating items at home; their combined output “definitely hasn’t diminished,” Beers said. She and Aguglia then pick up the completed works from volunteers’ homes and deliver them to the recipient organizations.

The Eucharia Ministry often collaborates with similar ministries; for example, the group recently teamed up with the St. Pius Tenth Prayer Shawl Ministry and the Chili Chain Gang in successfully reaching its goal of furnishing 350 scarves for Care-A-Van Ministries in Batavia. In addition, the Eucharia Ministry distributed 100 hats locally that were left over from an initiative organized by Steuben County Catholic Charities.

Currently, the Eucharia Ministry has about 35 active volunteers, including Vivian McManus and Mary Uzialko, its two remaining original members. Beers and Aguglia said they became involved as coordinators in an effort to keep the ministry thriving after its cofounders, Marlene Paine and Chris McCabe, passed away in 2013 and 2016, respectively.

The Eucharia Ministry’s members are mostly women from St. Christopher Parish, although the group also includes a couple of men, families from St. Christopher’s faith formation program, and even some out-of-towners. Beers and Aguglia said they’re always happy to welcome new members, especially when it’s safe to gather again as a group.

Aguglia, for one, said she can’t wait for those get-togethers to resume, not only to knit and crochet as a unit but also to rekindle close friendships.

“I just love the camaraderie — we have lot of laughs, and we’ve also gone through a lot together,” Aguglia said.

“It’s just such a wonderful group of people I’m so blessed to be a part of it,” Beers added.

Beers noted the deep personal meaning that Eucharia Ministry holds for her, saying she still has a lap blanket the minstry gave to her mother, who passed away in 2008.

“That’s not leaving me,” she said, adding that the kindness the ministry exhibited toward her mother has spurred her own involvement in the ministry.

“I just want to be able to help. It gives me a good feeling, because I know, being on the other end, how it feels to have other people think about you,” she explained.