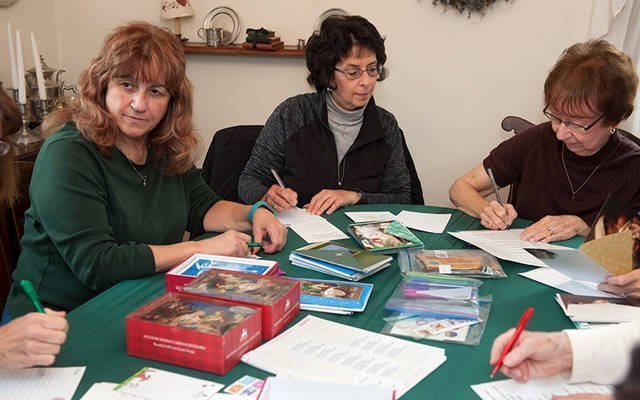 Mary Ann Tombasco (from left), Marge DiMeo and Faye Tong, members of All Saints Parish in Corning, work on Christmas cards Nov. 12 that will be sent to people who are homebound and in local nursing facilities.

For those who seek a sizable return on a modest investment of time, All Saints Parish in Corning/Painted Post offers a surefire opportunity.

By setting aside a handful of Sunday afternoons per year, members of the parish’s card-writing ministry spread joy to hundreds of area residents. Their latest effort occurred Nov. 12, when 10 parishioners produced 165 Christmas cards at the home of Mary Bacalles, the ministry’s organizer. Cards were then mailed to people who reside in health-care facilities, are homebound or have recently experienced the death of a loved one.

This successful ministry was launched in 2014 as an initiative of All Saints’ stewardship committee. Parishioners were asked to share names of family members and friends who would enjoy receiving handwritten cards several times per year, and the first card-writing group convened at the parish office that December and wrote nearly 100 cards. Members now gather at Bacalles’ house four times during the year; in addition to Christmas, the ministry sends greeting cards at Valentine’s Day and Easter as well as once during the summer to bridge the time gap to the following Christmas.

According to Bacalles, the ministry’s distribution list has grown substantially, thanks largely to parishioners and parish staff members — particularly extraordinary ministers of holy Communion — who provide the names of folks who might appreciate receiving cards. The effort also has expanded to include first-year parishioners “just to let them know we’re so happy they’ve joined our parish family,” Bacalles said.

Mailing costs for the cards are covered by All Saints Parish, and parishioners donate stamps as well as blank cards and decorative stickers. Messages written inside the cards typically reflect a particular time of year and/or include one of many religious sayings utilized by the group.

“We try to make it to fit the person,” said Davida Telehany, adding that she and fellow volunteers also write personalized notes if they know the recipients, which often is the case. In fact, one such person is Telehany’s own mother — Carmella DeBlasio, 93, who resides at Absolute Care at Three Rivers in Painted Post.

“She so enjoys cards and being remembered. So this is a special labor of love for me,” Telehany said. “It’s just a wonderful thing to do.”

Bacalles added that cards also contain information about All Saints’ television Mass schedule as well as the parish’s website address and phone number. When all the cards on a given afternoon are completed, participants pray over them on behalf of the recipients and their families. They then enjoy refreshments and continue the lively conversation that typifies each meeting.

“That’s what makes it. We look forward to it,” Marge DiMeo said of the ministry’s get-togethers, adding that “it brings us closer as a parish community and it serves others, so it’s kind of a win-win.”

Yet the folks who get the greatest satisfaction are not the ones who seal the envelopes, but those who open them. Bacalles, Telehany and DiMeo emphasized that it’s vital to maintain contact with recipients, since many of them are no longer able to attend church or be seen out in the community.

“We try to look at it as, they’re still part of the parish family. We want them to know they’re not forgotten. We just feel it’s very important that they know we still think of them and pray for them,” DiMeo said. “It’s these little things that make a big difference.”

Telehany views the ministry as a resurrection of what she calls “a lost art” in this era of digital communication.

“I believe in sending cards,” she said. “I was raised that way, and so I just feel that you’re making someone happy by thinking of them like that — that they’re not lost and alone.”

Bacalles noted that after a wave of cards is mailed, All Saints’ parish office receives many phone calls and e-mails from grateful recipients and their loved ones. This positive feedback, she said, serves as affirmation of the ministry’s importance.

“We see ourselves as the hands of Christ,” Bacalles stated.