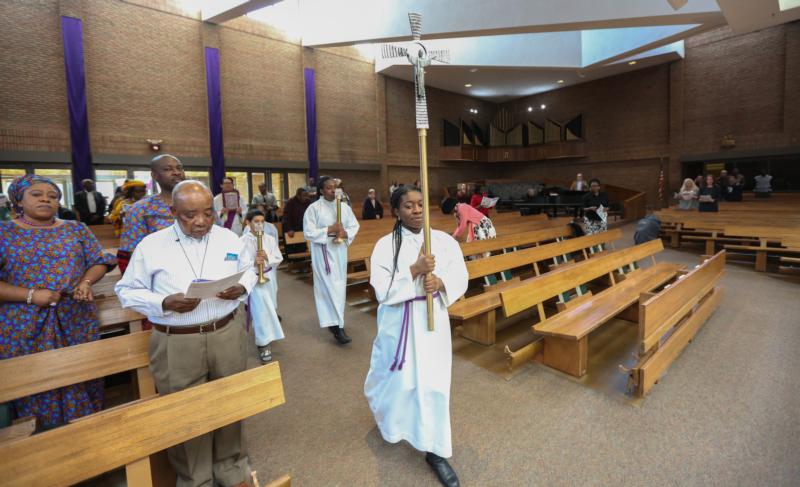 Minnesota bishops not waiting for governor, resuming larger Masses May 26

The new order follows two days of meetings with Archbishop Bernard A. Hebda of St. Paul and Minneapolis and other faith leaders, after Minnesota Catholic bishops announced May 20 that they planned to move forward with Masses at 30% capacity, despite the governor’s limitations at that time of public worship to 10 people indoors or outdoors because of the COVID-19 pandemic.

The bishops said they find the new guidance reasonable and have modified their plans to align with the 25% of capacity now allowed. In addition to slightly lowering capacity limits, they also were waiting to resume public worship May 27 instead of May 26, as they initially planned.

“Out of the discussion, we certainly always recognize legitimate authority and reasonable regulation, and while recognizing that it’s our responsibility to determine how it is that we regulate the liturgy, we think that’s a very reasonable regulation given the state of COVID-19 in our state,” Archbishop Hebda told The Catholic Spirit, newspaper of the Archdiocese of St. Paul and Minneapolis.

In a May 23 letter to the faithful stating that the bishops welcome the new executive order, Archbishop Hebda emphasized that resuming public worship is optional, and parishes should not reopen for worship unless they feel comfortable doing so, and are ready to meet safety and public distancing guidelines.

To resume public worships, parishes must adhere to strict health and safety procedures, including social distancing, he said.

“We know that Gov. Walz and his administration are trusting that when faith communities gather, they will do so consistent with public health guidance. Our commitment as Catholics to the common good makes it natural for us to pledge to be good citizens when we gather for worship,” he said. He also released his message via video.

Prior to the new executive order, the bishops, along with a group of Lutheran churches, had planned to resume public worship beyond the 10-person limit because they believed they could do it safely within the health parameters outlined by the state, but under which some other aspects of public life, such as restaurants and malls, had been given greater flexibility.

Prior to the end of Walz’s stay-at-home order, they tried twice to get feedback from the Walz Administration on the plan, but with no concrete timeline for the capacity expansion of faith-based gatherings under another executive order Walz announced May 13, the bishops announced they would move ahead without waiting for the governor.

Walz’s announcement of the new executive order also follows President Donald Trump’s May 22 announcement that he is deeming houses of worship “essential” and calling for governors to lift restrictions on worship.

At a news conference announcing the new order, Walz said he aimed to find a balance between Minnesota’s economic interests, freedom to worship and keeping Minnesota safe. He acknowledged that for many Minnesotans, not being able to gather with their faith communities has been difficult, and that worship has a special role in helping people cope with the pandemic. But, he was adamant that Minnesotans take precautions to prevent the spread of COVID-19.

“I want to be clear to Minnesotans: The worst has not yet passed in terms of infections and infection rate, and we’re learning more every day,” he said. “We are our brother’s keeper in this case, to making sure that what we do is going to have an impact on greater Minnesota.”

He noted his administration’s decision came from wide consultation, including his meetings with Archbishop Hebda and President Lucas Woodford, president of the Minnesota South District of the Lutheran Church-Missouri Synod; other faith leaders; and Vice President Mike Pence, who leads the White House’s COVID-19 task force.

The Centers for Disease Control issued new guidance May 19 that addressed houses of worship and large gatherings. Meanwhile, COVID-19 cases and deaths continue to climb in Minnesota. His administration is still encouraging people to stay home, and no house of worship is required to reopen.

“Now that we have CDC guidance, now that we have health guidance, this is a way for us to partner together in an agreement with the archbishop, especially around that congregation … but extending to others,” Walz said.

“Many of these congregations have gone to great lengths to think about this,” he added. “Many have made the choice and will continue to make the choice not to open for large gatherings … and continue to do things virtually.”

At the news conference, Jan Malcom, commissioner for the Minnesota Department of Health, announced that following a “robust” testing day May 23, the state had hit a new record daily high number of confirmed cases, at 847. She also reported 10 new deaths, for a total of 852.

“Even though we are slowly and carefully trying to open up opportunities for Minnesotans to resume activities that are so important, that does not mean that we’re on the other side of this,” she said. “This is not a return to normal.”

In the letter to the faithful, Archbishop Hebda thanked Walz, Malcolm, Lt. Gov. Peggy Flanagan and John Harrington, commissioner of the Minnesota Department of Public Safety. He also thanked Senate Majority Leader Paul Gazelka “for bringing faith leaders into conversation with the Walz administration over the past few months” and he thanked Becket, a Washington-based legal organization that provided counsel to the Minnesota bishops in defense of religious liberty.

“The bishops of Minnesota and I are thankful that our conversations with the administration and state health officials have helped us to strengthen our plan for moving forward,” said Archbishop Hebda, adding that religious leaders and Walz “share a common goal — enabling people of faith to safely return to the full practice of their faith.”

Wiering is editor of The catholic Spirit, newspaper of the Archdiocese of St. Paul and Minneapolis.