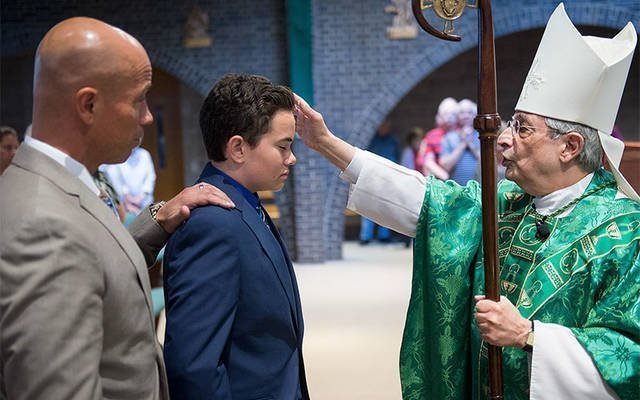 Bishop Salvatore R. Matano anoints confirmand Luke Medina with the Oil of Chrism as Luke’s sponsor, Colin Vega, looks on Aug. 4 at Church of the Resurrection in Fairport. Luke had heart transplant surgery and was unable to attend his confirmation in the spring with the rest of his class. (Courier photo by John Haeger)

Luke Medina is known to his relatives and faith community as a miracle child.

The 15-year-old sophomore at Palmyra-Macedon High School not only recently underwent a successful heart transplant this past spring, but his mother was able to bear a child despite being a heart transplant recipient herself.

Tina Lash-Medina explained that she and her son suffered from restrictive cardiomyopathy. The rare form of heart muscle disease is characterized by restrictive filling of the ventricles, according to information at heart.org. The heart muscle’s inability to relax and fill with blood produces a backup of blood into the atria (top chambers of the heart), lungs and body and causes the symptoms and signs of heart failure.

His recovery kept him from being confirmed last May with his class from Church of the Resurrection in Fairport, Lash-Medina said. Last summer, the parish requested permission from Bishop Salvatore R. Matano for Father George Heyman, the church pastor, to proceed with a separate confirmation, she said. Instead, the bishop confirmed Luke himself during a Mass celebrated at Church of the Resurrection on Aug. 4.

Luke said he doesn’t have words for the gift bestowed on him that day by Bishop Matano.

“It felt very special,” he said.

He and his mother said the family greatly appreciated how the bishop’s homily connected the Gospel with Luke’s journey.

“It all gets better from here,” Luke told the Catholic Courier during a Sept. 11 interview.

Luke had been on the transplant list since Aug. 31, 2017, and went into the Boston hospital as planned on Easter Sunday for a procedure in a catheterization lab, Lash-Medina said. After hours of delay, however, the family learned he would instead undergo a transplant surgery and receive a new heart the next day, Lash-Medina said.

“It was a big blessing for us,” she said. “Father Ed (Palumbos) had just blessed him the night of Holy Thursday and did an anointing. It kind of all fell into place perfectly.”

Father Palumbos — who was pastor of Church of the Resurrection and Church of the Assumption until reaching senior-priest status last June — said the entire parish was moved by Luke’s health situation because he was so visible to parishioners. Luke was involved in music ministry and often served as cantor during Masses, he added.

“Everybody was rooting for him and wanted him to do whatever was necessary for his future,” Father Palumbos said. “When he went off to Boston for the surgery, people wrote him, prayed for him, of course, and supported his parents in many ways. In a sense, it was our mission to help him get better and recover quickly.”

Knowing so many parishioners were there for them helped a great deal, Luke said.

Lash-Medina said the support of the parish, especially the kids who were in youth group with her son, was unwavering. And while they were aware of his heart condition, the youth-group members never treated him any differently, she noted.

“They lifted him up and prayed around him,” said Lash-Medina. “But they didn’t dwell on (his condition).”

The Resurrection community is a family, which supports and cares for anyone that is in need, but Luke’s situation was a bit different, noted Cathy Reitz, the parish’s director of faith formation.

“Here was a young man and his family that were facing so much uncertainty, and they never lost their faith and hope,” she said. “They generously continued to attend Mass weekly (and) serve in our music ministry. Luke also attended our youth-ministry program and prepared for confirmation faithfully even though he might have not always felt 100 percent or could not partake in all of the activities.”

The parish community also was blessed by the Medinas’ willingness to openly share their journey, Reitz added.

“We had the opportunity to love and support them along the way,” she said. “I feel blessed to know this family. Their strength, courage and faithfulness never went unnoticed, and it has been a wonderful example to all of us to trust and never give up hope that the Lord will provide. ”