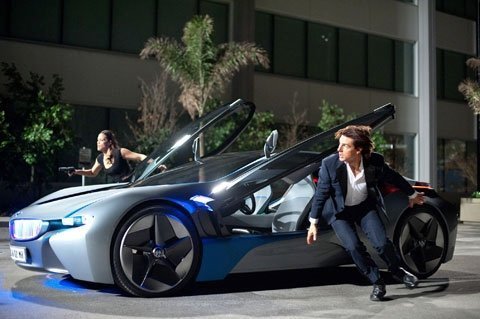 NEW YORK (CNS) — Make sure you take your motion sickness pills before seeing "Mission: Impossible — Ghost Protocol" (Paramount), a dizzying roller-coaster ride of an espionage thriller that propels you from the depths of urban sewers to the top of the world’s tallest building, and throws in outer space for good measure.

Director Brad Bird makes the leap from Pixar animation ("The Incredibles," "Ratatouille") to live-action movies with this fourth installment of the big screen "Mission: Impossible" franchise. He’s an excellent choice, bringing a cartoon-like frenetic energy and sense of fun to this highly entertaining slice of escapism, rebooting a series that was beginning to feel a bit shopworn.

Tom Cruise returns as Ethan Hunt, chief operative of the elite Impossible Missions Force. A team of agents, including sultry Jane Carter (Paula Patton) and cheeky Brit Benji Dunn (Simon Pegg), springs Hunt from a Moscow jail just in time for him to uncover a conspiracy that threatens the destruction of Earth (of course).

It seems Russian bad guy Kurt Hendricks (Michael Nyqvist) wants to unleash global nuclear war in order to secure world peace. Yes, he’s a sociopath, convinced that it’s good for the planet to be destroyed to allow renewal and rebirth.

"War has a role in the natural order," he says, noting that mankind emerged even stronger after the dinosaurs were wiped out by meteors, and that Japan became a powerhouse after Hiroshima and Nagasaki.

Hendricks steals the Russian nuclear launch codes from the Kremlin, creating a huge explosion in the venerable complex and framing Hunt for the disaster. To save face, the U.S. president invokes "Ghost Protocol," disavowing and disbanding the IMF.

Hunt and his team must go underground to find Hendricks and stop his dastardly plot, all the while pursued as terrorists by the Russian police. The trio becomes a quartet with the arrival of operative William Brandt (Jeremy Renner), whose motives are not entirely clear.

The chase is on, giddily canvassing Europe, the Middle East, and India, offering viewers a stunning travelogue — until, that is, much is blown to smithereens. The IMF team’s array of gadgets and gizmos would make James Bond green with envy.

Viewers be aware: the cinematography is quite spectacular (especially in Imax), with the camera swooping and soaring with each death-defying stunt. Hearts will race and palms will sweat as you watch Hunt scale, one-handed, the Burj Khalifa building in Dubai, reaching the 2,716-foot summit.

"Mission: Impossible — Ghost Protocol" is a summer popcorn blockbuster all wrapped up as an entertaining Christmas present.

The film contains intense action violence, including gunplay, and some rough language. The Catholic News Service classification is A-III — adults. The Motion Picture Association of America rating is PG-13 — parents strongly cautioned. Some material may be inappropriate for children under 13.