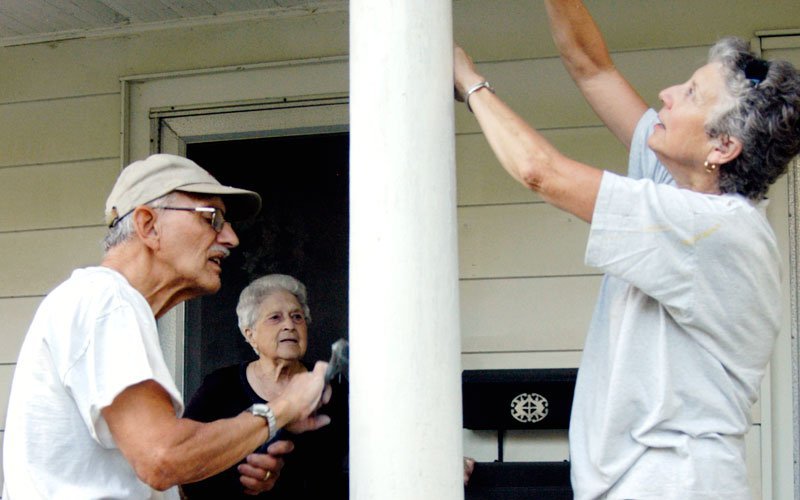 WATERLOO — Eighty-eight-year-old Yolanda Giansante is proud of her house on a quiet side street in town.

Giansante was born in this house, which used to belong to her parents, and she takes great pains to keep its interior spotless. It’s a bit more difficult, however, to maintain the exterior.

That’s where the missionaries come in.

A group of cheerful Catholics descended upon Giansante’s house on two nights in mid-August and spent several hours sprucing up the exterior of her house. They called themselves missionaries, but they didn’t hail from far-away locales. Rather, they could be back home within minutes after leaving Giansante’s house, because they also live in Waterloo or nearby Seneca Falls.

The volunteers were part of the Local Missionary Group recently formed by St. Mary Parish in Waterloo and St. Patrick Parish in Seneca Falls. St. Mary parishioner Kathy Peters began putting the group together in late spring. Many people take mission trips and help people in far-away communities and even other countries, but there’s no need to travel a great distance to find people who need help, she said.

“There’s so much need in our own back yards, so I thought, ‘Oh, I would love to do missionary work for us,'” Peters explained.

Peters ran a notice in the parishes’ bulletins asking for volunteers to join the new group. Volunteers should be willing and prepared to do anything from raking leaves and trimming hedges to cleaning basements and garages, Peters said at the time. She also invited elderly or handicapped parishioners who needed work done at their residences to contact her. She did caution, however, that the new group would undertake one-time projects, but not continued maintenance programs at individual’s homes.

Four female parishioners asked the group to work at their homes, so members of the Local Missionary Group met for the first time in early August and spent several hours working at the home of a widowed parishioner.

“We washed her windows inside and out. We trimmed hedges, weed-whacked and weeded around the whole property,” Peters said. “It wasn’t in terrible shape, but it was a lot of work. There were eight of us, and it took us two and a half hours.”

The volunteers also cleaned out and organized the woman’s garage, carting away several bags of garbage in the process, Peters said.

The group gathered at Giansante’s house on Aug. 15 and 19. They spent most of the first night — a quiet, cool summer night — chipping old paint off the front porch and its elaborately carved wooden posts. Giansante stood on the porch and chatted with the volunteers, admiring their handiwork and her family home.

“There aren’t many big porches like this one,” she said.

Chipping paint from those ornate posts was tedious work, but volunteer Paul Wenderlich, a St. Patrick parishioner, said he didn’t mind the work. Wenderlich said he joined the Local Missionary Group because he enjoys helping people. He’s worked on homes with Habitat for Humanity in the past, and thought he would be able to put his skills to use with this new group.

“I like painting and scraping and doing hedges and doing a certain amount of basic carpentry. I learned skills from people that knew what they were doing,” he said.

Wenderlich helped take care of his parents’ property when they became unable to maintain it, and hopes the Local Missionary Group is still around to lend him a hand years down the road if he needs the help. Until then, however, he enjoys putting his skills and good health to use.

“As long as you’ve got the skill, rather than sit and twiddle your thumbs, you’re better doing something. It helps keep you in shape,” he said.

When the volunteers had finished chipping off the porch’s flaking white paint, Peters swept up the chips while Wenderlich used an electric trimmer to trim the hedges in front of the porch and poured fresh mulch under the plants. When they returned Aug. 19, they put a fresh coat of paint on both the front and side porches as well as three posts supporting a small rear overhang. Then they planned to next meet to do work at a Seneca Falls parishioner’s home.

“We just have to rake leaves,” Peters said. “She’s got tons of leaves in back, and tons of downed branches.”

The parishioners helped by the Local Missionary Group often try to pay the volunteers, who always politely turn down the money, Peters said.

“A lot of these elderly, they’re on a fixed income and they’ve given to the church all their lives. I told them, ‘Now it’s time for the church to give back to you,'” Peters said. “They say, ‘What can I do?’ and I say, ‘Put a little extra in the collection next time.'”