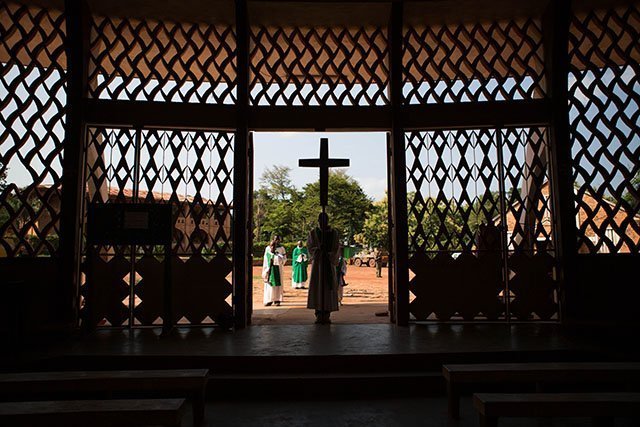 French soldiers secure St. Joseph Cathedral after an attack by Seleka rebel fighters in the Central African Republic July 27. The Polish vicar-general of the Central African Republic’s Bouar Diocese, Father Miroslaw Gucwa, said Father Mateusz Dziedzic, a 38-year-old ministering at a Catholic mission in Baboua, was kidnapped Oct. 13 and an offshoot of the Islamist-dominated rebel Seleka alliance was demanding the release of their leader, Abdoulaye Miskine, who was detained in 2013 in neighboring Cameroon.

WARSAW, Poland (CNS) — Poland’s Catholic Church has urged "constant prayers" for one of its missionary priests after he was kidnapped by rebels in the Central African Republic.

"We still await news of his fate," Lidia Rutkowska of the Tarnow Diocese’s mission office told Catholic News Service Oct. 17. "In the meantime, we’ve called on all Catholics to be united in prayer for him, and to join solidarity marches after Mass on this Mission Sunday."

Bishop Andrzej Jez of Tarnow issued the appeal after the Oct. 13 overnight abduction of Father Mateusz Dziedzic, a 38-year-old ministering at a Catholic mission in Baboua.

The Polish vicar general of the Central African Republic’s Bouar Diocese, Father Miroslaw Gucwa, said uniformed men had forced open the gates of the mission and identified themselves as members of the Central African People’s Democratic Assembly, which is fighting the transitional government of President Catherine Samba-Panza, installed last January.

Father Gucwa added that the group, an offshoot of the Islamist-dominated rebel Seleka alliance, was demanding the release of its leader, Abdoulaye Miskine, who was detained in 2013 in neighboring Cameroon.

"They wanted to take two priests as hostages, but after long arguments they agreed to leave one at the mission," Father Gucwa told Poland’s Catholic information agency, KAI, Oct. 14.

"When talking to these people, the priests heard the same demand — free our boss. They didn’t want money or to steal anything from the house — their demand was purely political."

The Catholic Church’s nine dioceses make up around a third of the 4.4 million inhabitants of the Central African Republic, one of the world’s poorest countries. Seleka, led by Arab-speaking Islamists, suspended the constitution in March 2013 but was driven back after the January deployment of 2,000 French and 5,000 African peacekeepers.

A spokesman for Poland’s Foreign Ministry said Oct. 14 that Father Dziedzic had been allowed to telephone the Diocese of Tarnow after his abduction and appeared "well treated." He added that the ministry has set up a crisis team to handle the incident.

The Central African Republic sent a joint defense and foreign ministry delegation from the capital, Bangui, to discuss the situation with Cameroon.

Western missionary clergy — mostly from the U.S., France, Italy, Spain and Poland — have offered shelter to some of the estimated 1 million people displaced by continuing violence in the Central African Republic.

The director of Caritas in Bouar Diocese, Italian Carmelite Father Aurelio Gazzera, said another Polish priest had been allowed to deliver medicine and clothes to a designated location Oct. 15 for the abducted Father Dziedzic, who suffers from malaria.