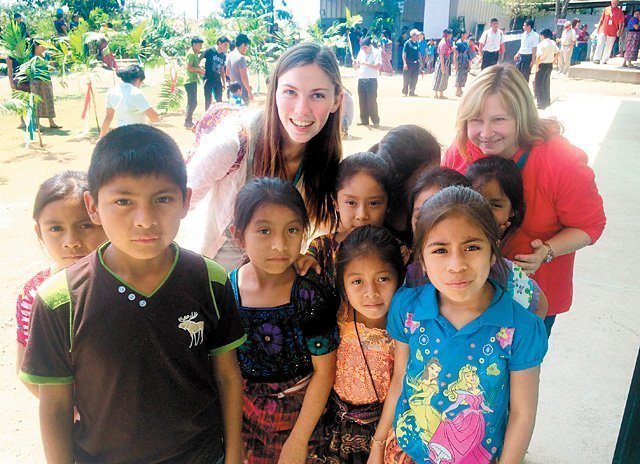 During a March 2015 trip to Guatemala, Paige Cheney (top) and her mom, Dawn Cheney (right), pose outside a school where they help to sponsor children through the Unbound program.

During her young life, Paige Cheney has found creative ways to blend her passions for traveling, humanitarian efforts and tae kwon do.

The 20-year-old’s interest in global poverty extends back to "since I was really little," said Cheney, noting that she, her brother and two sisters would routinely place money in a jar on their family’s kitchen table. The funds were forwarded to Unbound — an international organization through which her parents, Jim and Dawn, have served as longtime sponsors for children in developing countries.

Cheney said that letters and photos mailed from sponsored youths helped her feel connected to the cause she was serving.

"There were pictures of the kids on our fridge and on our jar, so we knew exactly what the money was going toward," she said, adding that this experience gave her an important early life lesson.

"It kind of showed us we had to help other people besides just yourself," said Cheney, a Phelps resident whose family belongs to St. Felix Church in Clifton Springs.

Cheney’s growing interest in global poverty led to a six-week stay in Argentina through AFS Intercultural Programs in 2010, following her sophomore year at Midlakes High School. She lived with a host family "which ended up just being me and my 18-year old host sister because my host mom worked several hours away and lived at her work," she said. Cheney and four other American students visited an orphanage four days per week, playing games with children and teaching them English.

"The orphanage began to open my eyes to how other people were suffering and really made me want to start helping people," she remarked.

More recently, Cheney took part in another mission journey in March 2015, when she and her mother were among a contingent that visited poor residents of Guatemala who are sponsored by Unbound. Cheney said a key facet of the one-week trip was to observe how Unbound’s donations are being used toward various projects, as well as conduct assessments about the local people’s educational needs and available resources. These resources, she added, are the type that many in the United States take for granted — "mostly like clean water, clothes, shelter."

"They have, like, two or three clothing outfits in the entire year," Cheney said.

During her stay in Guatemala Cheney got to meet with several sponsored children, communicating through a translator and with her basic knowledge of Spanish. She remarked that the Central American youths were a pleasure to get to know.

"They were all really friendly and outgoing. You wouldn’t really know they lived in poverty," she said.

This past winter, just weeks before that mission trip, Cheney organized a tae kwon do tournament at the Phelps Community Center. The benefit event was highly successful, attracting 60-plus competitors and bringing in more than $1,100 for Unbound, far exceeding the amount she had hoped to raise. Cheney has been a martial-arts enthusiast since she was 12, becoming a black belt by the time she was 16 and now serving as an assistant instructor at a local academy.

In the area of parish activities, she is a former altar server and now trains new servers at St. Felix Church, which is part of St. Peter Parish along with St. Francis in Phelps and St. Dominic in Shortsville. Cheney, who will turn 21 in September, attends Rochester Institute of Technology where she is a senior accounting major. She’s due to graduate this December and plans to go on to graduate school at RIT for her master’s in business administration. Already she’s gotten a nice head start in the world of business, working as the accountant for her father’s grocery store, Wade’s Market Center, on Route 96 in Farmington.

However her professional life unfolds, Cheney will continue being involved in humanitarian efforts. She noted that two months ago she began sponsoring her own child through Unbound — a girl from Tanzania — "now that I can afford it."

She also plans to keep combining her love for travel with helping people in need, attaching a genuinely global focus to this cause.

"I definitely want to continue going on more trips, to visit every continent in the world and do missionary work in each place," she stated.