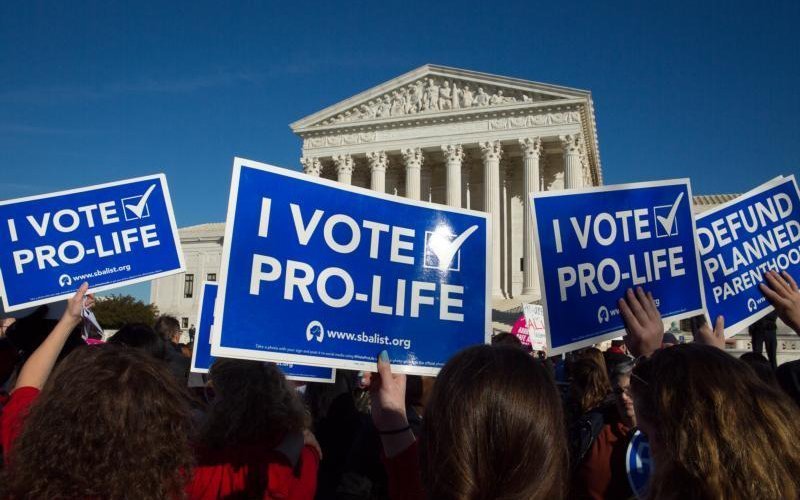 Pro-life advocates gather near the U.S. Supreme Court during the annual March for Life in Washington Jan. 19, 2018 (CNS photo by Tyler Orsburn)

JEFFERSON CITY, Mo. (CNS) — The sponsor of the Missouri bill to ban abortions after eight weeks of pregnancy described how the measure moved through the Legislature as being like human life itself.

“This bill started out like everyone else here … with a simple heartbeat,” Republican Rep. Nick Schroer of O’Fallon said in a statement May 17 after the state House voted 110-44 to send it to Gov. Mike Parson for his signature. The state Senate passed it the day before.

The Missouri Stands for the Unborn Act, H.B. 126, aims to uphold Americans’ most basic rights, including life, liberty and the pursuit of happiness,” the Catholic lawmaker said. “This legislation has one goal, and that is to save lives … to withstand judicial challenges and not cause them.”

“During the annual March for Life in January, I walked with those proclaiming a culture of life,” he said. “We all have a responsibility to do what we can so that in this nation, in our families, in our archdiocese, we choose life unconditionally.

“What we are now witnessing here in Missouri are lawmakers exercising that responsibility, and we commend them for working to protect the innocent and vulnerable,” he continued. “We pray that the love of Jesus Christ touches our hearts, so we all become witnesses to the protection and nurturing of all life.”

The bill would criminalize any abortion beyond eight weeks of pregnancy, except in cases of medical emergencies. There are no exceptions for rape or incest. Doctors who perform abortions after eight weeks face five to 15 years in prison. There is no punishment for the mother.

The Missouri Catholic Conference, the public policy arm of the state’s Catholic bishops, noted that the bill also features many other pro-life provisions, including increased parental notification and informed consent provisions; a ban on abortions based on race, gender and Down syndrome diagnosis, “and an outright ban on abortion when Roe v. Wade is overturned.”

Passage of the Missouri bill took place as the Alabama Legislature passed — and Republican Gov. Kay Ivey signed — a ban on abortion in nearly all circumstances. In Louisiana, Democratic Gov. John Bel Edwards is poised to sign a bill that would ban abortion after a fetal heartbeat is detected, which could be as early as early as six weeks of pregnancy. The measure is similar to laws passed in Kentucky, Mississippi, Georgia and Ohio.

Meanwhile, a bipartisan majority of the Rhode Island Senate Judiciary Committee rejected a measure to expand abortion similar to New York’s new law that allows abortion on demand through birth.

The president of the national pro-life group Susan B. Anthony List congratulated the people of Missouri “on this historic victory in the fight to protect unborn children and their mothers.”

“Spurred on by the extremism on display in states like New York and Virginia, the American people are making their voices heard,” Marjorie Dannenfelser said. “An overwhelming majority of Missourians — Democrats, Independents, self-described pro-choice voters, women in greater numbers than men — agree that abortion on demand through birth, even when science informs us unborn children can feel excruciating pain, is extreme.”

She added, “In Missouri and nationwide, momentum is clearly on the side of life.”