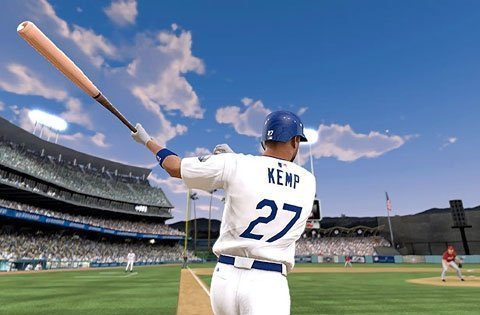 NEW YORK (CNS) — If you know your RBIs from your ERAs, then "MLB 12: The Show" (Sony Computer Entertainment) might just be in your wheelhouse. Newcomers or casual gamers, however, may find the title a little dry. And, while parents can rest easy about this offering’s content, youngsters may be overwhelmed by its complexity.

The focus here is on simulation. The developers have done everything in their power to replicate the experience of a real Major League Baseball matchup, and in this they’ve succeeded.

The substance of the game — played for review on the PlayStation Vita — is situated within three main modes. The first is the "Normal Season" option in which the user takes on the role of a coach and attempts to guide a team to the World Series, while also participating as a batter, fielder and pitcher.

For those who yearn to join the ranks of such legendary team owners as the New York Yankees’ George Steinbrenner and the Chicago White Sox’s Charles Comiskey, there’s the "Franchise" mode. Via this option, gamers not only control play, but provide behind-the-scenes supervision of everything from the quality of the turf to the food available for purchase by the masses.

"Road to the Show" is the most inventive of the modes. It enables players to create a rookie and guide him through his career, from the minor leagues to (hopefully) major-league success. To achieve this ambitious goal, however, hours upon hours of play will be required.

Although modes like this open "MLB 12" up to a slightly wider range of enthusiasts, the majority of the game is unmistakably designed for purists.

Fans who own the PlayStation 3 version, for example, can transfer a saved game from their home console to their handheld Vita. The fact that such a feature — which, of course, requires owning two copies of the same game — is prominently showcased in the advertising for "MLB 12" demonstrates just what sort of audience the developers are targeting.

Such hardcore devotees of the national pastime will find the handheld port of the PS3 game clean, with fun gameplay, great presentation, and plenty of hours of depth at their fingertips. Trading systems have been tightened and the Vita’s touch controls have been well implemented to add a new curveball to the formula.

The good news continues on the moral plane, since nothing remotely objectionable presents itself to gamers of any age.

Those already in possession of "MLB 11," though, may find that — for all their variety — the new features amount, in the end, to little more than a slight update. Still, even incremental improvements can be appreciated in a game of inches.

The Catholic News Service classification is A-I — general patronage. The Entertainment Software Ratings Board rating is E — Everyone.