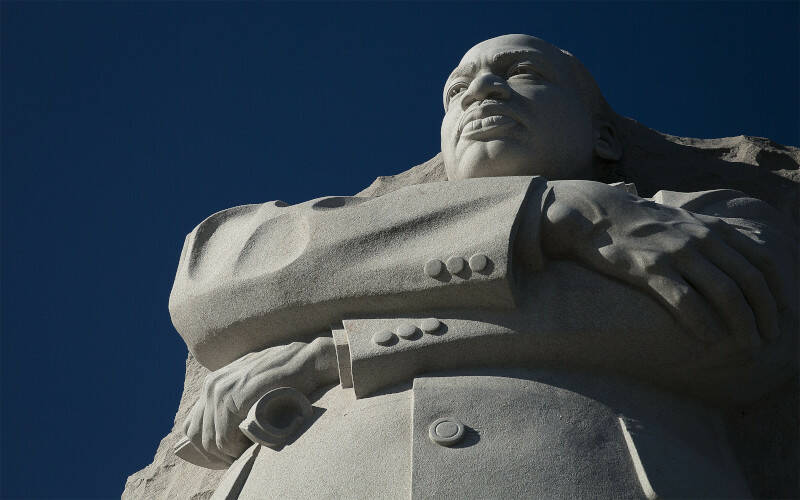 WASHINGTON (CNS) — Washington Cardinal Wilton D. Gregory said marking the 10th anniversary of the dedication of the Martin Luther King Jr. Memorial in Washington Oct. 21 was an opportunity “to pause and reflect together at this place of tribute to the legacy of a great American.”

“In studying and reflecting on this special place on its 10th anniversary, we are inspired by the life work of Dr. King and confidently recognize ourselves and the work we must still do in gratitude for each of the lessons he shared with us,” he said in remarks at an anniversary ceremony.

Cardinal Gregory, who offered a reflection and prayer, said Rev. King’s examples of hope and resiliency should inspire people today to “never grow discouraged in our pursuit of social justice and racial justice.”

“As Dr. King did in his lifetime — and as we are called to live our own beliefs — we are actively called to work against racism, police brutality, poverty and the need for food, immigration reform, housing, health care and mental health disparity and violence in all of its forms,” Cardinal Gregory said.

Cardinal Gregory has had a long association with Rev. King and his legacy. The civil rights leader was assassinated in 1968 because of his efforts to end segregation and racial prejudice.

The cardinal previously served as archbishop of Atlanta, Rev. King’s birthplace. He has preached in Atlanta’s Ebenezer Baptist Church, where both Rev. King and his father preached, and in 2006, he was inducted into the Martin Luther King Board of Preachers at Morehouse College in Atlanta.

In his remarks, Biden lamented the “narrow and cramped view of the promise of America,” and spoke of his efforts to expand health care, work for police reform, seek more federal spending for child care and education, making medicine more affordable, fighting climate change, expanding the Voting Rights Act, and working for economic justice and equal justice under the law.

He also promised to “confront the deep stain on the soul of the nation — hatred and white supremacy,” because “we cannot and must not give hate any safe harbor.”

The dedication anniversary, he said, was an opportunity “to renew our own courage in the shadow and light and shoulders of Dr. King — the courage to confront wrong and do right. To bring the dream of Dr. King just a little bit closer to reality is the highest of callings.”

Harris noted that the King memorial is “in many ways distinguished from all other monuments” on the National Mall, because it is “dedicated to a man who lived among us … a man whose voice we still hear and echoes not just across this city, but the world.”

Cardinal Gregory told those at the ceremony that “we cannot afford to grow weary” but “must stay united and strengthened” in fighting injustice.

“Dr. King appealed to our hearts as he taught us that racial harmony is not simply a gracious hope. It is the only way our nation will continue to advance toward its own political ideals,” Cardinal Gregory said. “Our national future is dependent upon the establishment and fostering of respect for our culturally diverse nation and recognizing the dignity of all peoples.”

“We are immensely grateful for the perseverance Dr. King repeatedly demonstrated in the face of hatred … to bring forth to our collective consciousnesses the voice of those suffering,” Cardinal Gregory said.

Pointing out that Rev. King “spoke of equality for all women and men, especially African Americans who were systemically and violently discriminated against by law and in daily practice in too many of our nation’s communities,” the cardinal said that more than 53 years after the civil rights leader’s assassination, “his wisdom is still relevant today.”

He said that “the values Dr. King eloquently and consistently spoke of are distinctively American, and they wrestle us from our comfort zone, causing us to ask ourselves, ‘Am I caring for my neighbor as myself? Am I living the ideals of American justice, equality and freedom for all each day in my own life?’”

The cardinal said the anniversary of the memorial dedication “brought us together this day to work in harmony and peace just as the Rev. Dr. Martin Luther King Jr. did in his lifetime.”

Originally dedicated in October 2011, the Martin Luther King Jr., Memorial covers a four-acre area and has as its centerpiece a 30-foot-tall “Stone of Hope” granite statue of Rev. King, so named for the line from his now-famous “I Have a Dream” speech: “Out of the mountain of despair, a stone of hope.”

The memorial also includes a wall on which are carved excerpts from Rev. King’s many sermons and speeches.

More than 3 million people visit the memorial each year. It is located not far from the Lincoln Memorial, where Rev. King delivered the “I Have a Dream” speech Aug. 28, 1963.