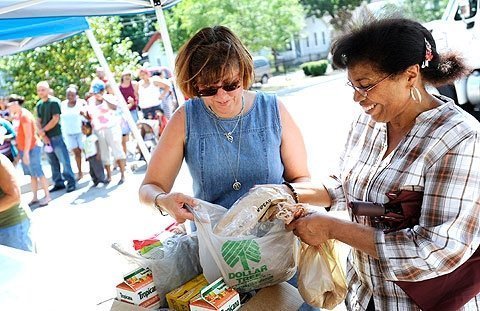 ROCHESTER — Like the Gospel of Mark’s account of Jesus feeding the multitude with five loaves and two fish, those who came to the mobile food pantry at St. Michael Church last month left with plenty of food.

After waiting in the 96-degree sunshine for up to two hours on July 23, more than 120 people received food donated by Foodlink and distributed by volunteers from St. Frances Xavier Cabrini Parish. More than 2,500 people took home food during July that was distributed at the parish’s five worship and food cupboard sites in northeast Rochester, said Diamond Auble, the parish’s volunteer coordinator. And anyone who needs food is welcome to come to the mobile food pantry, Auble added — all she asks when they sign in is how many children, adults and senior citizens live in the household.

"God is good," said volunteer Mary Holloway, who survived the extreme heat with a damp cloth over her head as she walked repeatedly from the mobile food pantry truck to the food tent to replenish supplies. "It is so awesome to be able to help these people out."

And not only did they have enough to feed everyone, organizers had leftovers, as happened with Jesus and his disciples in Mark 6:41-44. Any leftovers are taken to the St. Regis Food Pantry and St. Andrew food cupboard, Auble added.

"They all ate and were satisfied," Mark wrote. "And they picked up 12 wicker baskets full of fragments and what was left of the fish. Those who ate (of the loaves) were five thousand men."

Foodlink approached St. Frances Xavier Cabrini Parish to serve residents in the northeast Rochester neighborhoods once the agency received a grant earlier this year from the Walmart Foundation to purchase the truck, which cost nearly $100,000, added Matt Knaub, Foodlink’s director of operations.

The truck also allows Foodlink to fulfill another part of its mission to provide healthy foods by distributing fresh produce, dairy, breads and other refrigerated items along with such nonperishable items as canned goods and cereals, noted Jeanette Batiste, chief operating officer.

"How do you serve a healthy meal if there’s not any perishable items?" she asked rhetorically.

The mobile pantry is especially helpful for area residents who fall in the gray area of not earning enough to meet their basic needs but not qualifying for social services such as food stamps, the Foodlink representatives explained.

Such people "can’t afford to feed yourself or your family," added Batiste. "And there’s no safety net."

Luz de Leon said that she was laid off three years ago after working for a temporary agency and her family doesn’t qualify for social services or food stamps. Her husband makes enough to pay bills but there is little leftover, she explained. De Leon said she even picks up bottles and cans for the 5-cent deposit return to help with money to feed her four children.

The donated items delivered on the truck come from such companies as Wegmans, Wal-Mart, BJs, Sam’s Club and Target, added Knaub. As part of "Feeding America," a national program, Foodlink also is able to order items donated from major food companies — such as Tropicana and Chobani Yogurt, which donated items at the St. Michael site — by accessing a database of food products available from all over the country, Batiste explained. Additionally, Foodlink is able to purchase meat in bulk and sell it from the truck at the mobile sites at reduced costs for clients, she noted.

Larson said that through the mobile pantry Foodlink also is trying to reach out to more rural agencies to help families in those areas. In some rural areas, families may not even have access to a nearby grocery store or even convenience store, she added.

"We partner with agencies … as a way of helping people know about the agency and offer support," Batiste noted. "Because beyond the food distribution, that gets to the root of the problem and offers access to benefits and other resources."

Those other resources may include a community garden such as the one created this summer by Ibero-American Action League, also in partnership with Foodlink, explained Bryan Babcock, who oversees Ibero’s Garden Project.

But whether its work is through a community garden or its mobile pantries, Foodlink could not feed the thousands of people it does annually without the network of volunteers — like those from St. Frances Xavier Cabrini — who donate about 40,000 hours of service annually, Knaub noted.

Millie DeLucia-Lewis comes out weekly to help with the mobile food pantry at St. Michael. And on July 28, she served everyone that came through the line at St. Michael with a smile and maybe a quip or two.

As she handed one woman a box of doughnuts, she said: "All the calories are taken out of that today."

"Some people we see week after week," she said. "The saddest thing is you see people who never thought they’d stand in a line like this. They’re so stunned."

Maria Solis, a single mother who works part time and lives with her mother, said feeding the family is a struggle.

"This is a blessing," she said of the mobile food pantry.

"This can help us get through the whole week," added her mother, Maria Ortiz.

EDITOR’S NOTE: The mobile food pantry at St. Frances Xavier Cabrini Parish locations will continue throughout the summer; for more information, call 585-325-4041. For information from Foodlink about its mobile pantries, call 585-328-3380, ext. 149, or send an e-mail to jbaldanza@foodlinkny.org.