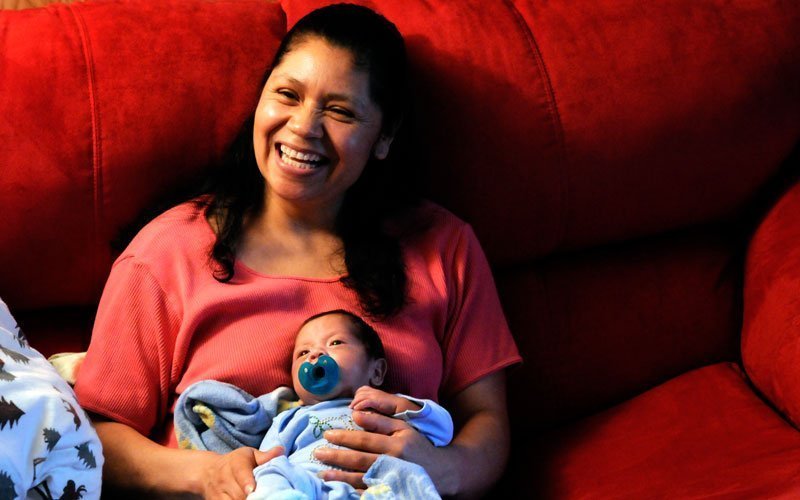 Maria Méndez gave birth to twins March 30 and became a United States citizen May 8. Above, she holds newborn son Adrian May 21 at her home in Holley.

HOLLEY — Maria M√©ndez only went to school for a few short years and toiled many more picking produce as a migrant worker.

But the Mexican native said her recent decision to become a U.S. citizen was mainly due to her desire for her children to succeed, and she knows an American education will help them reach their goals.

“Life in the fields is difficult, very difficult,” M√©ndez said in Spanish during an interview May 21 at her home in Holley. “You’re out there eight hours, 10 hours a day under the sun, sometimes it’s raining, even in winter, in the snow chopping cabbage.”

To further set a good example for her four children — twins Adrian and Alondra Guadalupe, born March 30; Juan, 7; and Gabriela, 12 — M√©ndez became an American citizen on May 8. She had a work visa for many years, and her husband, Juan, had become a citizen several years prior. The couple, who moved to the Brockport area in 1993, has been married for 12 years.

Becoming a citizen was not an easy decision, M√©ndez said, even with her husband’s encouragement to do so during the past two years.

“In truth, I didn’t want to become a citizen,” added M√©ndez, 39. “I had always hoped to return to my country. But, now I think, we sought a better life here. I am married. I have my family here. So it is better to become a citizen here because soon with all the immigration laws, everything will become more difficult.”

The process to become a citizen was not easy either, she said, noting that it required many months of study to improve her English skills and learn the requisite information. She may have given up, she said, if not for help from such people as Sister Janet Wahl from the Migrant Education program at the State University of New York at Brockport.

Sister Wahl had already been helping her learn English, M√©ndez said, so she asked for further assistance with preparing to answer any of the 100 questions in a citizenship booklet given to people who want to become U.S. citizens.

“She was a self-starter on this,” Sister Wahl noted. “Family unity is a big thing for her. From the very beginning, she wanted to be able to take care of her children and have them get a good education. She herself wasn’t able to go to school except for a year or two. … She has a great work ethic and a great respect for education.”

Friend Manuela Swanger, who also works in the Migrant Education program, said that the family commitment displayed by Maria and Juan M√©ndez is exemplary.

M√©ndez said that the citizenship ceremony at the Federal Building May 8 — when immigrants from many other countries also became naturalized citizens — was bittersweet.

“I felt happy, sad, everything,” she said. “But I think, this was the best choice I could have made … because I have my children, my family is here and this was the best thing I could do. I owe a lot to my husband.”

Her son, however, was the happiest member of the family, M√©ndez added, especially after she passed the citizenship test in Buffalo earlier last spring. That oral exam wasn’t as difficult as she had feared, she said, because the immigration officer only asked 10 questions.

“She’s been working really hard,” said Juan, who added that he was proud of his mother.

She said that her hope for other migrant workers and their families who may not have the same opportunity to become citizens is that they are at least offered some sort of amnesty. That way, she added, they can come out of the shadows doing the work other Americans don’t want to do.

M√©ndez noted that when she arrived in this country there didn’t seem to be as much persecution of migrant workers, yet she still felt like a prisoner going from work to home and vice versa. Plus, the couple would travel to different areas to find work, she said, but now she notices that fewer migrants travel because they live in constant fear of deportation.

Once she and her husband had children, however, she said they did choose to settle in this area to give their children a stable life. Both now work for Allen Canning Co. in Brockport and are parishioners of Brockport’s Nativity of the Blessed Virgin Mary Church.

“What I don’t understand is why the government doesn’t want us here when we only come to work, to find a better life to improve our own lives and the lives of our families,” M√©ndez said. “We’re not here to hurt anyone. Sometimes people say we take away jobs from Americans. But I have worked many years in the fields and there were rarely Americans working among us.”

As a new citizen, she registered to vote right away because she hopes that the new president can do something to stop the suffering for migrant families, many of who are friends in the area.

“I hope this new president will make the difference for these families,” she said. “I hope he will offer a pleasant surprise to those who (want) … to become documented workers.”