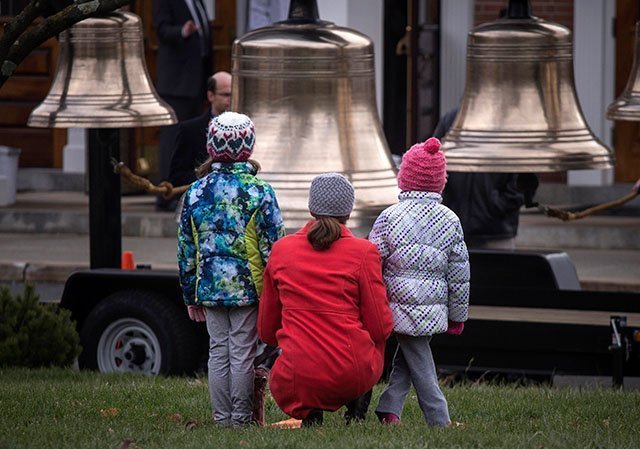 A woman kneels with her children in front of bells which were being rung outside of St. Rose of Lima Church ahead of Sunday Mass Dec. 14, the second anniversary of the Sandy Hook Elementary School shooting in Newtown, Conn. Parents of almost half the young children killed by a gunman at the Newtown school have taken steps toward filing lawsuits tied to one of the deadliest school shootings in U.S. history.

DUBUQUE, Iowa (CNS) — Nicole Hockley’s message from Newtown, Connecticut, to people at two different venues in the Dubuque area was clear: "Our hearts are broken, but our spirit is not."

The mother whose 6-year-old son, Dylan, was killed in the shootings at Sandy Hook Elementary School Dec. 14, 2012, along with 19 other children and six adults, spoke to a crowd of several hundred at Loras College. She also spoke at Clarke University during her visit to Dubuque earlier this fall.

"Sometimes when you lose someone you love and all hope seems lost, that is when you find strength you never knew you had," Hockley said at Loras, a Catholic college. "The strength doesn’t come from grief or despair or anger. It comes from faith.

"It comes from love, and perhaps if we let love lead us we would more easily find a course of action and create solutions to protect the future of our country, our children."

Hockley now directs communications and outreach for Sandy Hook Promise. The charity, started by families who lost loved ones at Sandy Hook, aims to prevent gun violence by starting a grass-roots movement in communities around the nation.

Hockley was later joined on stage by Tim Makris, executive director of Sandy Hook Promise, to take questions from the audience. Both explained that the goal of the group was not to ban all guns or attack responsible gun owners, but rather to work together to find solutions, including promoting education on the causes of gun violence, gun safety and mental wellness.

Hockley and Makris drew a distinction between "mental illness" and "mental wellness." Whereas only about 4 percent of incidents of gun violence in the United States is carried out by people with serious mental illness, the majority is done by people who lack mental wellness because of anger issues or other problems, according to the speakers.

"After every shooting, people start arguing, and it’s always about gun control or gun freedom," said Hockley. "We often say at Sandy Hook Promise that one of the best ways to start talking about gun violence is to stop talking about the gun, because the real story isn’t what happened on (Dec. 14, 2012). It’s about what happened before."

She continued, "While I believe there is much to be done in the area of legislation, I believe we must also focus on the person behind the gun. What is it that brings a person to that point where the only option visible to them is to pick up a firearm or a weapon and harm himself or herself or someone else? What is their trigger and how can we prevent them from taking this action? Anyone can be trained to recognize the signs and signals that someone needs help."

Hockley said solutions begin with education about what causes gun violence. Her group encourages "Promise Communities" at the local level, which receive tools from the charity. All those who join Sandy Hook Promise are asked to pledge to work to end gun violence. The organization’s website is www2.sandyhookpromise.org.

Sandy Hook Promise focuses on education to foster social change, provides resources to promote mental wellness, and gun safety in homes. Hockley also mentioned support of gun laws to increase safety, which everyone can agree on — such as background checks. A portion of Hockley’s remarks focused on the personal toll the tragedy took on her.

"In terms of my faith, I won’t lie to you," she said. "It’s been completely shaken and I really hope I don’t offend anybody, but it’s very hard for me to think that anyone would allow such evil to exist and to take away so many beautiful children and adults. And some people said, ‘It was God’s will.’ I can’t believe that because I don’t believe God is like that."

Hockley credited the love of friends and family and their patience with helping her work through the grief. For many, the healing process is still going on two years later, according to Makris, whose son was in the school that day.

"We have about 800 kids in our town who are in therapy and countless adults," he said. "Countless attempts at suicide and two people who have succeeded, so there is a ripple effect that has come out of this tragedy, that perhaps a lot of people don’t realize."

Hockley and Makris called Sandy Hook Promise’s mission to change the culture of violence a "marathon" instead of a "sprint," one that will require average people to step up.

Russo is a staff writer at The Witness, newspaper of the Dubuque Archdiocese.