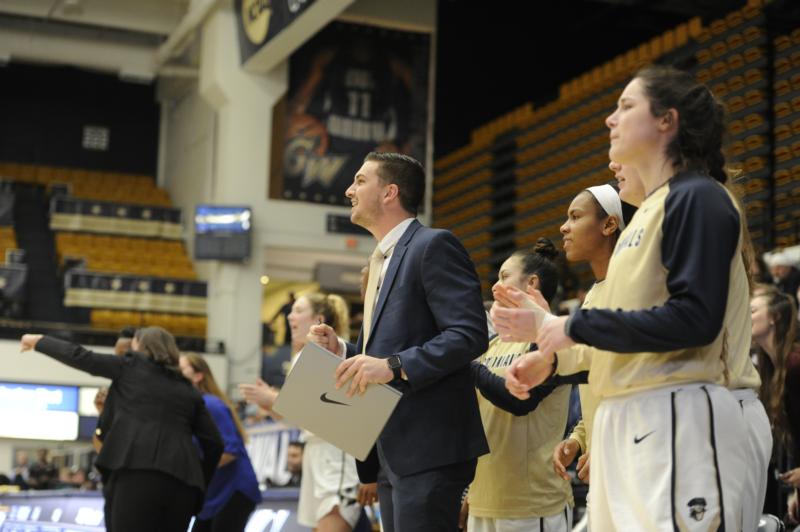 TRENTON, N.J. (CNS) — As his basketball career started to gain traction, Kevin DeMille realized it was going to be in the women’s game.

And who better to learn from than the University of Connecticut’s Geno Auriemma, architect of one of the greatest college basketball programs of all time.

After graduating from Notre Dame High School in Lawrenceville in the Trenton Diocese in 2009, DeMille was with Auriemma for seven years at UConn as a practice player and assistant director of operations. UConn went to seven Final Fours and won five national titles during that time.

Last year, Jennifer Rizzotti, who played on Auriemma’s first national championship team, hired Kevin for the same position after taking over as head coach at George Washington University in Washington. Rizzotti has since promoted DeMille to an assistant coach.

DeMille, 26, is the son of highly successful former Notre Dame girls’ coach Ann DeMille, so he has been around the game all his life. His dad, Lou, coached an AAU girls’ team.

DeMille also had a stellar playing career, though his competitive career ended at Connecticut, but since the Huskies women practice against men, DeMille joined the practice squad.

He never thought about coaching until recently.

“I was considering playing in college at a little bit of a lower level, but then I went to UConn and did some practice playing and was a student manager of operations for them,” DeMille told The Monitor, newspaper of the Diocese of Trenton. “I just knew I loved it. Growing up around my mom’s teams, I knew I wanted to be around women’s basketball. I knew if I was going to stay in the game, not as a player, that it would have to be women’s basketball.

DeMille considers his mom his greatest role model, and his dad gave him his most special player-coach relationship.

But his greatest education of late has come from Auriemma and Rizzotti.

“His competitiveness and his attention to detail driven by his competitiveness is something I hope I can take for the rest of my career,” DeMille said of Auriemma. “I’m lucky my boss was the point guard on his first national championship team, so she shares that same mentality.

“It’s the desire to do everything perfectly with the expectation that’s impossible,” he continued. “But the drive to do that will at least bring you to excellence. With the goal being perfection, the realistic outcome is excellence, and to be excellent is to be as successful as possible.”

Auriemma’s striving for perfection “will always be the thing I’ve taken from him,” he said.

Rizzotti had an outstanding head coaching career at the University of Hartford, Connecticut, before taking over the successful George Washington program last year. The two became friends when Auriemma asked Rizzotti to coach on the U.S. National team; he also brought DeMille on board as a video editor and scout. A strong bond formed between DeMille and Rizzotti.

“We quickly, over the course of three years, became very good friends and we got a chance to learn from each other and sort of share our personalities with each other,” DeMille said. “We get along so well, we still spend time together outside of work. I get a chance now to spend time with her and her family. I am so grateful for Jen and her trust in me that we developed because we’re friends. We’ve been able to have basketball conversations and life conversations about our goals and what we want to do.”

One of those talks had to do with DeMille’s duties in his new role. As one of three assistants on staff, he will do some work with team operations, prepare and edit scouting reports and help with recruiting.

Kevin’s mom feels he is equipped to handle whatever responsibilities he has with only one thought in mind.

“Regardless of his role, Kevin has always put the team first,” Ann DeMille said. “That attitude has remained with him through his experiences at UConn, with USA basketball, and now at GW. He is eager to do whatever needs to be done, even behind the scenes, if it helps the players and program achieve success.”
– – –
Fisher is a correspondent for The Monitor, newspaper of the Diocese of Trenton.