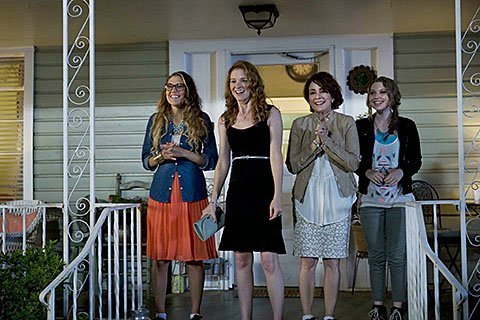 Andrea Logan White, Sarah Drew, Patricia Heaton and Sammi Hanratty star in a scene from the movie "Moms' Night Out." The Catholic News Service classification is A-I -- general patronage. The Motion Picture Association of America rating is PG -- parental guidance suggested. Some material may not be suitable for children.

NEW YORK (CNS) — Good intentions are not enough to sustain the wholesome but weak comedy "Moms’ Night Out" (TriStar). Though faith filled and family-friendly, the movie — helmed by directors, and brothers, Jon and Andrew Erwin ("October Baby") — is just not very funny.

Stressed-out moms Allyson (Sarah Drew), Sondra (Patricia Heaton) and Izzy (Andrea Logan White) take a break for a night on the town. But the relaxing excursion they’ve planned soon turns into a series of frantic misadventures.

The quest for the baby leads to a tattoo parlor where one of its artists, leather-clad biker Bones (country singer Trace Adkins), joins the mix. And, since Allyson’s minivan has also inexplicably disappeared, a British-born cabbie (David Hunt) gets drawn into the chase as well.

Christian themes are prominent in "Moms’ Night Out," and the quiet moments during which faith occupies center stage are more successful than the manufactured mayhem to which most of the running time is devoted. In the same serious vein, the picture also boasts a moving affirmation of the rewards of parenthood.

Though much of the humor falls flat, there are a few amusing interludes. One of these features Allyson’s frustrated and flustered interaction with a spacy restaurant hostess played by Anjelah Johnson. Overall, however, there’s something strained about all the would-be wackiness on display.