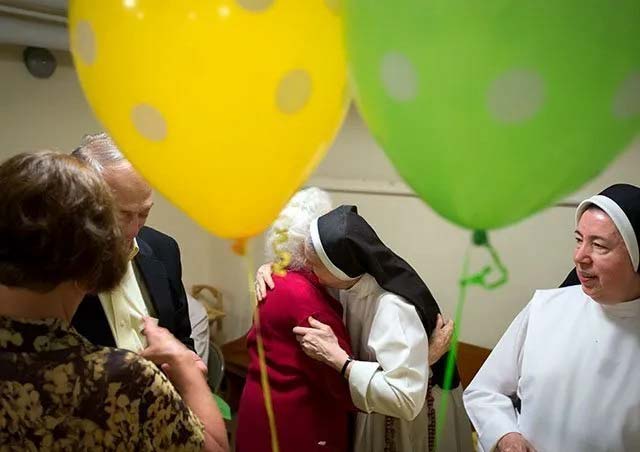 Sister Ritamae Dillon hugs Margaret Amisano during a luncheon to celebrate the 70th anniversary of the Dominican Monastery of Mary the Queen in Elmira Aug. 16. The 15 religious sisters living in the monastery will be moving to Illinois Sept. 2. 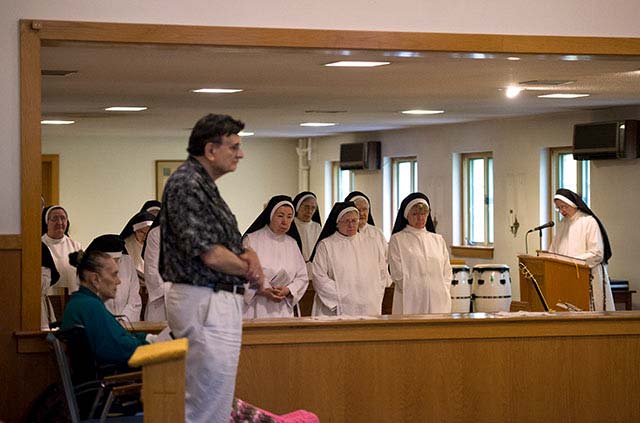 The cloistered Dominican sisters at the Monastery of Mary the Queen in Elmira worship separated from the rest of the congregation during a Mass of Thanksgiving for the monastery’s 70th anniversary Aug. 16. The 15 religious sisters living in the monastery will be moving to Illinois Sept. 2. ELMIRA — By the nature of their vows, they were unable to meet friends out at restaurants or pay visits to homes. Even so, the cloistered Dominican nuns managed to form deep bonds with folks in the Chemung County area through sheer love and prayer.

Those connections were acknowledged during a Mass of Thanksgiving at Monastery of Mary the Queen on Aug. 16. More than 150 people filled the monastery’s small chapel for a late-morning liturgy, held 70 years to the day after the first group of sisters arrived in Elmira.

However, the anniversary celebration also served as an emotional farewell Mass: the nuns are due to relocate to Illinois Sept. 2.

“Our joys are mixed with sorrow,” stated Father Anthony Breen, OP, celebrant, in his opening remarks.

Throughout Mass the nuns sat in their traditional area to the side of the altar, apart from the other Mass-goers. Yet those groups mingled closely during the luncheon that followed, exchanging hugs, kisses and best wishes. Meanwhile, a large cake bore the message “Happy 70th anniversary — we will miss you!”

Sister Miriam, OP, acknowledged that during the Mass “some of us cried. It’s a difficult thing, because we have lived with these people for so long. We know their history. We’re part of their lives, and they’re part of ours.”

The Dominican women religious have maintained ties with the public by making Mass available seven days per week at their monastery on West Church Street. Sister Miriam explained that they’ve also gotten to know many folks well via prayer requests and intentions submitted at the Dominicans’ invitation.

“The people do come to us,” remarked Sister David Marie, OP. “We have made a lot of friends.”

In his homily, Father Breen observed that the nuns have attained true joy for themselves “by acts of kindness for the good of others” and in turn left behind a grateful public.

“We have all benefitted immensely from their prayers and sacrifices, and the very positive impact they’ve had on this community,” he said. “We cannot forget them, and we can be sure that they will not forget us.”

“They’ve been very good to us,” agreed Rose Marie McLaughlin, a parishioner of Elmira’s Christ the Redeemer Parish, who has been connected with the monastery for 25 years.

Among those in attendance were Sisters Veronica Marie and Bernadette Maria, OP, from Monastery of Our Lady of the Rosary in Buffalo — the congregation from which eight nuns arrived in Elmira on Aug. 16, 1944, to form a daughter house of the Buffalo community.

“These are our sisters, and we wanted to support them in saying goodbye,” Sister Veronica Marie explained.

Sister David Marie said the overall turnout on Aug. 16 was “very reaffirming. I think twice as many came as said they were going to come.” She also noted that several well-wishers have said they plan to come visit in Illinois.

Nuns in the Dominican order — also known as the Order of Preachers — devote their lives to prayer, work and study in a cloistered, or closed, setting, not leaving monastery grounds except for special reasons such as medical appointments. The Elmira nuns have lived out their vocation on a four-acre complex on Elmira’s west side. Over the years the sisters have accepted private donations and also supported themselves through baking and selling cookies; printing parish bulletins; and since 1983 operating an on-site gift shop selling food and crafts produced in-house.

The relocation from Elmira to Illinois was announced in late 2013. This move is based on the wishes of Father Bruno Cadore, master (worldwide leader) of the Dominican order, who has urged Dominican women religious to group together in greater numbers in light of declining vocations. Sister Miriam noted that all 15 nuns currently residing at Monastery of Mary the Queen will move, residing temporarily at a Dominican retreat facility in Springfield with plans to eventually build their own residence a few miles from the motherhouse there.

The Elmira monastery has been put up for sale, and Father Breen, who has served at the Elmira monastery the past six years, will move to a new assignment in September that he said has not yet been determined. A reception in his honor is set for Aug. 24 at the Faith Formation Center of Christ the Redeemer Parish, 1010 Davis St., following 10:30 a.m. Mass.

Meanwhile, the Third Order Dominicans — a branch of the Order of Preachers created for laypeople — will move their meetings from the monastery to Elmira’s St. Charles Borromeo Church, gathering on the first Tuesday of each month.

The greatest impact from this series of changes is being felt by the sisters themselves, many of whom have spent the past several decades — 24 hours a day, seven days a week — in one location. For instance, Sister David Marie and Sister Miriam, who have both served as prioresses at Monastery of Mary the Queen, have lived there more than 100 years combined. Now, with an 800-mile move awaiting them, “We’re just sort of overwhelmed,” Sister David Marie acknowledged.

Yet despite the many uncertainties swirling about them, Sister David Marie said she fully trusts that this is all part of God’s plan.

“That’s part of the journey, that’s how God is. He’s so beyond us,” she said.