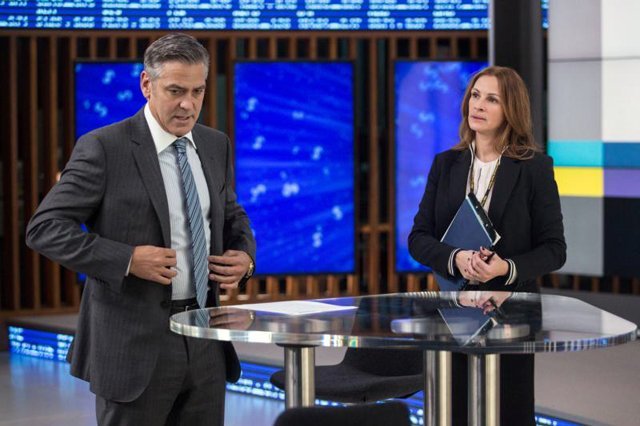 Julia Roberts and George Clooney star in a scene from the movie "Money Monster." The Catholic News Service classification is A-III -- adults. The Motion Picture Association of America rating is R -- restricted. Under 17 requires accompanying parent or adult guardian.
By Joseph McAleer
Catholic News Service
NEW YORK (CNS) — Forty years ago, Peter Finch gave an Oscar-winning performance in the black comedy "Network." He played Howard Beale, a crazed television news anchor who exhorts his audience to shout out, "I’m mad as hell, and I’m not going to take this anymore!"
The film exposed the superficiality of TV and its seductive (and often pernicious) effect on viewers. It highlighted the medium’s potential to lull the public into passivity, disposing them at the same time to make foolish choices.
"Money Monster" (TriStar) might best be thought of as the poor stepchild of that 1976 movie. It offers a similar allegory on the power of the media, along with an up-to-the-moment indictment of Wall Street machinations and corporate greed.
George Clooney stars as Lee Gates, host of the eponymous TV program on which he peddles investment advice. Surrounded by Vegas-style dancers, loud music, and bold graphics, Gates whips his audience into a frenzy as he ticks off the most promising stocks and bonds.
"Without risk there is no reward!" he says with Beale-like passion.
Clearly, Gates relishes his status as something of a mash-up between Jim Cramer of CNBC’s "Mad Money" and P.T. Barnum. His antics are viewed with chagrin, however, by Patty (Julia Roberts), his ever-patient producer (and erstwhile girlfriend).
Gates gets more spectacle than he bargained for when, in the midst of a live episode, a gun-wielding intruder bursts into the studio. Kyle (Jack O’Connell) has a bone to pick with Gates: He lost his life savings by following a bum tip on Gates’ show.
The young man demands to know why a much-hyped stock, Ibis Clear Capital, mysteriously went south, losing $800 million in a single day for small investors like himself.
Kyle straps a bomb on Gates, and amid much shouting and angst (also Beale-worthy), a tense hostage drama unfolds in real time on screens across the world.
The ever-resourceful Patty senses that things are not what they seem. And it’s soon clear that Ibis’ CEO, Walt Camby (Dominic West), has some explaining to do.
Director Jodie Foster ("The Beaver") keeps the plot moving at a furious pace, mimicking the quick edits and short attention span of today’s TV. Unfortunately, this approach leaves precious little time to flesh out the main characters and explore their back stories.
The blame for such shallowness is shared by a predictable screenplay. Writers Alan Di Fiore, Jim Kouf and Jamie Linden prove overly reliant on cliches.
Entertaining, but evanescent, "Money Monster" turns out — ironically enough — to partake of the same strengths and weaknesses that generally characterize the medium it sets out to skewer.
The film contains occasional violence, brief semi-graphic sexual activity, implied masturbation, an out-of-wedlock pregnancy, and frequent profane and crude language. The Catholic News Service classification is A-III — adults. The Motion Picture Association of America rating is R — restricted. Under 17 requires accompanying parent or adult guardian.
– – –
McAleer is a guest reviewer for Catholic News Service.
Copyright © 2023 Catholic News Service, Inc. All rights reserved. Linking is encouraged, but republishing or redistributing, including by framing or similar means, without the publisher's prior written permission is prohibited.