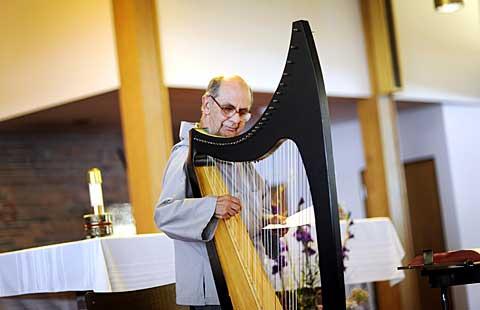 To say that Brother Pierre Pratte doesn’t get out much is an understatement. As a Benedictine monk from Mount Saviour Monastery in Chemung County, Brother Pratte resides in a cloistered community and only leaves it a couple of times or so per year — usually to visit family.

So it was a rare treat for those who experienced Brother Pratte’s considerable musical gifts at St. Salome Church in Irondequoit, near Rochester, on June 10.

"It’s kind of exceptional. We’re not on the circuit," Brother Pratte remarked to the Catholic Courier, saying the appearance was arranged through his ties to Father Richard Beligotti, a longtime acquaintance who is an assisting priest at St. Salome.

Brother Pratte delighted his audience by explaining and demonstrating the beauty and spirituality of Gregorian music, singing in a powerful voice and adding gentle accompaniment on his Gaelic harp. (For video coverage of the event, visit www.catholiccourier.com and click on the "Photo & Video" link.)

Gregorian chant has enjoyed a renaissance in popular culture in recent years, with monks in Spain and Austria compiling albums that became best-sellers in many parts of the world including the United States. Brother Pratte asserts that this soothing music also is a special way to connect with the divine.

"It grabs the inner feelings, the unconscious," he said.

Helping to deepen listeners’ feelings is Brother Pratte’s harp, which he originally sought to acquire because there’s no organ at Mount Saviour’s chapel.

"With the acoustics of the place, the harp filled the space very well," he said, noting that the instrument was purchased nearly 30 years ago for $500 — a bargain by today’s rates. For his rare public recitals, Brother Pratte has transported the 50-pound harp by station wagon.

Those wishing to hear the music of Brother Pratte and his fellow monks — and experience Benedictine spirituality as well — are invited to visit Mount Saviour, which is located in Pine City between Elmira and Corning. Brother Pratte said the public is always welcome for Masses, prayer services and retreats (visit www.msaviour.org for schedules,) and the chapel is open daily from 4:30 a.m. to 8:30 p.m.

Brother Pratte, who will celebrate his 70th birthday on Aug. 12, is a native of Three Rivers, Quebec. His close ties with music date back to childhood; he was a longtime member of a prestigious Catholic boys’ choir. In 1961, following several years of seminary, he entered the Benedictine order and took up residence at Abbey St. Benoit du Lac in Quebec.

He arrived at Mount Saviour in 1966 and has resided there ever since. He is among two priests and seven brothers at the monastery, serving as Mount Saviour’s treasurer as well as a sheep herder.

Brother Pratte said he acquired the nickname "Brother Gadget" for his promotion of computers, television, video recorders and photography within the monastery. Although some may be surprised that monks embrace modern technology, Brother Pratte pointed out that study is a key component of Benedictine living and therefore all means possible should be used to advance knowledge — "anything to learn, actually," he said.

He described his time at Mount Saviour as highly fulfilling.

"The word ‘content’ is a good word," he said, noting that he enjoys "this balance between the work we do, the study and the life of public prayer and private prayer." He acknowledged that a cloister lifestyle is certainly not for everybody, saying that monkhood hinges not only on an initial attraction but "do I have the stuff to do it, to live this type of life?"

"It depends on sensitivity. If you’re sensitive to the word of God, there’s excitement," Brother Pratte said. "Really, we’re in the monastery for happiness. There’s a price for it because we don’t go out (in public) for every occasion, but ultimately there’s always this happiness that we look for, like anybody else."

Brother Pratte added that as a monk, the pursuit of such joy is a lifelong endeavor.

"You can never say, ‘I made it.’ If you study for a degree, after four years you can get your diploma. But with this type of life, there’s always something more," he said.