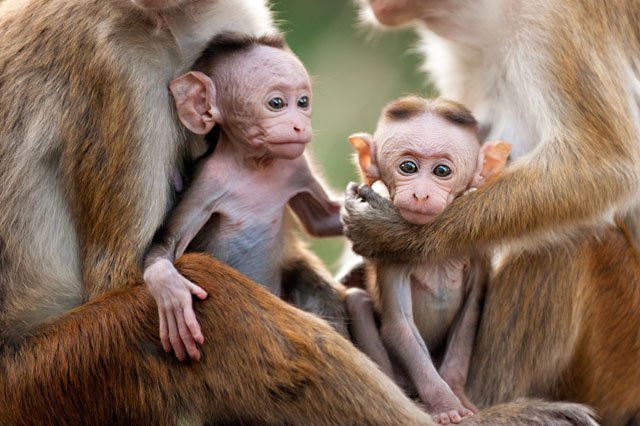 This is a scene from the nature documentary "Monkey Kingdom." The Catholic News Service classification is A-I -- general patronage. Motion Picture Association of America rating is G -- general audiences. All ages admitted. (CNS photo/Disney)
By John Mulderig
Catholic News Service
NEW YORK (CNS) — Timely social commentary may seem an unlikely ingredient in a wildlife documentary. Yet it’s hard to miss the implicit human subtext underlying the enjoyable chronicle "Monkey Kingdom" (Disneynature).
Those looking beyond this film’s placid surface will easily recognize the similarities between its simian heroine, a toque macaque named Maya, and an entire class of economically challenged workers in the world’s more developed economies.
Disadvantaged by her low rank within the rigid hierarchy of her species, sympathetic Maya is forced to struggle both for her own survival and for the welfare of her son, Kip. When the aggression of a rival tribe displaces Maya’s troupe from their bountiful home territory, however, the apparent misfortune turns out to have a silver lining.
Though the group’s resulting exile involves short-term dangers for Maya and Kip, it also presents them with unexpected opportunities. Because the forced move has suddenly thrown the prevailing social structure into flux, Maya has a shot at improving her standing — and, therefore, her lifestyle.
She does so primarily through the rise of Kip’s dad, an outsider to her band whose fighting skills eventually gain him the respect of Maya’s male counterparts.
Co-directors Mark Linfield and Alastair Fothergill make the most of their movie’s picturesque setting. Dubbed "Castle Rock" by the filmmakers, Maya’s jungle dwelling stands amid the ruins of an abandoned city in Sri Lanka. Tall domes and weathered statues of the Buddha in the surrounding landscape moodily evoke ancient glories gone to seed.
Such dramatic scenery, together with pleasant narration by Tina Fey, helps compensate for the low-speed pace of events. So, too, does the fact that "Monkey Kingdom" provides a rare cinematic refuge for families.
The occasional intrusion of Darwinian conflict, though it exacts only a single fatality, might be unsettling for the very smallest viewers. But this is otherwise a completely comfortable option for parents.
The Catholic News Service classification is A-I — general patronage. The Motion Picture Association of America rating is G — general audiences. All ages admitted.
– – –
Mulderig is on the staff of Catholic News Service.
Copyright © 2023 Catholic News Service, Inc. All rights reserved. Linking is encouraged, but republishing or redistributing, including by framing or similar means, without the publisher's prior written permission is prohibited.