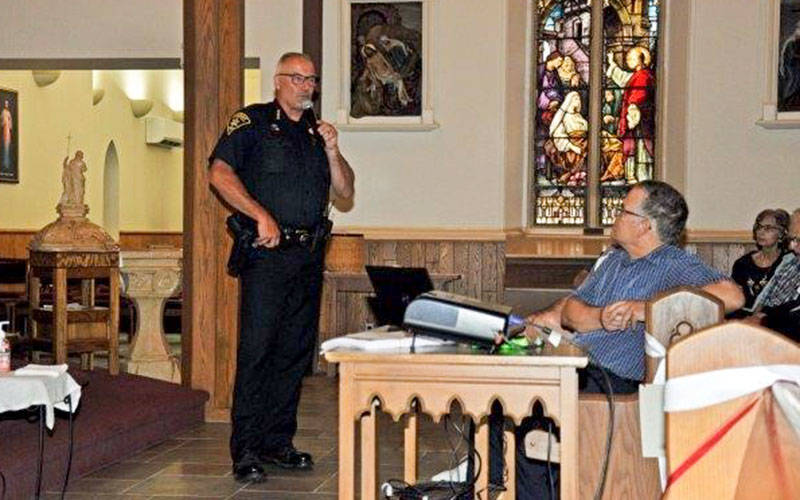 There’s no single cause for the alarming rash of recent homicides in the City of Rochester, said Monroe County Sheriff Todd Baxter.

“It’s a whole bunch of stuff, all right, and it’s going to take decades to figure this out,” Baxter told his audience July 26 at Holy Cross Church in the city’s Charlotte section.

In the face of such a disturbing trend, Baxter stressed the need for community involvement, whether participants are directly affected or not.

“We all have a part to play in this violence thing,” he said during his 90-minute presentation on violence awareness. “I’m going to challenge us a little bit today to not turn blind eyes onto this and ignore it.”

According to statistics provided by the Rochester Police Department, 15 homicides took place in the city between June 4 and July 5 — an average of approximately one every two days. With 41 murders already between January and July of 2021, it seemed likely that by December the city would surpass the 2020 total of 52 homicides — itself the highest in at least a decade.

The five-year average of murders in the city has risen “by 100 percent, if not more,” added Baxter, who has led the Monroe County Sheriff’s Office since 2018. He added that Rochester is not alone in its experience of rising violence, noting that 80 percent of all U.S. cities saw a jump in murder rates during 2020.

Locally, Baxter said the steep increase in violent crime has been fueled by targeted attacks featuring retaliation shootings, often related to gang activity; nearly every homicide victim in Monroe County had some sort of relationship with his or her perpetrator, he noted.

Other contributing factors cited by Baxter were the breakdown of families; racism; poverty; easy access to firearms; suspension of vital youth programs and services during the coronavirus pandemic; and a rise in opioid addiction.

What can the community do? Baxter urged participants at Holy Cross to speak out against injustice; get involved in volunteerism, such as starting church programs to engage young people; and make community peace a joint goal of police and citizens, such as through a neighborhood watch program.

“We’re all in this thing together,” he said.

The sheriff also offered tips on how citizens can protect themselves against violence and other criminal activity. Examples were being aware of active threats and responding properly to them (details are available online); taking steps to secure homes and property; and practicing online security.

The July 26 program at Holy Cross was arranged through the parish’s stewardship and evangelization team. Frank Kirchgessner, a member of that team, noted that more than 100 people attended.

“It went very well,” he said, adding that his parish — which is located on the northern tip of the city — is looking to hold similar public gatherings in the future.

As part of a concluding service for the event, Deacon Ed Giblin echoed Baxter’s call for community involvement by citing the beatitudes — “Blessed are the peacemakers, for they will be called children of God” — and Pope Paul VI’s famous quote, “If you want peace, work for justice.”

Deacon Giblin, a retired RPD commanding officer who now serves as director of the diocesan Office of the Permanent Diaconate, added that a peaceful community is not just one marked by an absence of violence but also one “that recognizes the image of God in one another, that works to help everybody.”