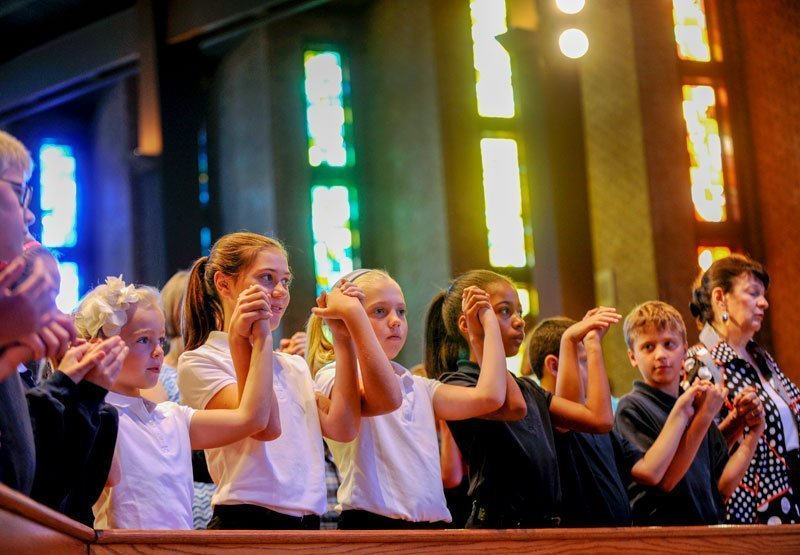 Church of the Assumption

This Fairport parish began as a mission of Palmyra’s St. Anne Church in 1854. The first church was built at 22 High St. in 1854 and was expanded to twice its original size in 1962. The original church still stands at that site, across the street from the current church. The community became a parish in its own right in 1866 with Father Louis J. Miller as its first pastor. During the pastorate of Father John Codyre in 1882, a new church bearing the name Church of Assumption of the Blessed Virgin Mary was constructed on land that now serves as the parking lot for the current church. The current worship site on High Street was built in 1981 and was dedicated on May 15, 1983.

Church of the Holy Spirit

Established by Bishop James E. Kearney on June 29, 1965, the parish celebrated its first Mass in the auditorium of Our Lady of Mercy High School in Brighton, where liturgies took place for most of the next two years, with summer Masses taking place at Bauman’s Farm in Webster. Construction of the brick and concrete block church building at 1355 Hatch Road in Penfield began in 1965. Its interior featured exposed structural steel and a concrete floor, which attracted quite a bit of attention. The first Mass in the church was celebrated on Palm Sunday, April 7, 1968. The parish, which celebrated its 50th anniversary on May 24, 2015, added a parish center in 1990.

Land was purchased on the north side of Webster’s Ridge Road and the cornerstone was laid on May 26, 1861 by Father Peter (Thaddaeus) Alexander, CSsR, rector of Rochester’s St. Joseph Church for this parish, founded by German immigrants who settled in Webster and were unable to travel to the German parish in downtown Rochester. The building was dedicated three months later on Aug. 5, 1861. The parish’s first pastor, Father A. Heckinger, was appointed in 1867. The current church at 1460 Ridge Road was completed in 1901 and dedicated that year on the feast of the Most Holy Trinity. The parish demolished the rectory and added two wings to the church in 1969.

Church of the Resurrection

As the community grew at Fairport’s Church of the Assumption, Church of the Resurrection was founded in 1973 to serve the Town of Perinton’s eastern side. Father Robert Kreckel was named the founding pastor of the new parish, which is one of the smallest in the area. Before a church building was constructed, daily Masses were celebrated in the basement of the rectory on Hamilton Road, and Sunday Masses were celebrated in a building adjacent to the Fairport Central School District’s Martha Brown Middle School. The church was completed in 1976, and its first Mass was celebrated on Oct. 9, 1976.

In 1900, Ann Furlong and her husband called on Bishop Bernard J. McQuaid to erect a church in Mendon for Catholics who were celebrating weekly Masses in Finucane’s Hall. After $2,930 was raised for the building, St. Catherine of Siena Church was completed in 1902 and dedicated by Bishop McQuaid on May 23. The parish operated as a mission of four area parishes until 1955. In 1956, Msgr. Albert Schnacky became the first pastor of the newly independent parish. A community center bearing Msgr. Schnacky’s name was built in 1976. A new church was built in 1990 and dedicated on May 3, 1992, by Bishop Matthew H. Clark.

To shorten the walking distance for Catholics in East Rochester — then known as Despatch — who were attending Mass in neighboring Penfield, Bishop Bernard J. McQuaid established the Church of St. Jerome in 1905. Liturgies were initially celebrated on the third floor of a Commercial Street building owned by Adolphus Branchaud. Father Bernard J. Gefell became the first pastor of the new parish, and Bishop McQuaid laid the cornerstone for the church at 207 Garfield St. on Aug. 12, 1906. By 1927, the parish had grown so much that the church and rectory had to be enlarged In 1950, following the sudden death of Father Gefell, more than $150,000 was pledged in a campaign to remodel the church. In 2014, St. Jerome underwent major renovations, which included making the structure handicap accessible.

Bishop James E. Kearney established this Fairport parish in 1968 in honor of St. John Fisher, bishop of Rochester, England. The martyr saint, who in 1961 had been designated patron of the Diocese of Rochester, typically signed his pastoral letters, “John of Rochester,” inspiring the parish name. The first pastor, Father John LeVeque, initially celebrated Masses in a 50-seat chapel in Bushnell’s Basin, which was donated by Pittsford’s St. Louis Church. Because of the chapel’s size, many worshippers had to stand in the doorway and under the windows In 1962, the parish broke ground on a combined school-church building, and Father LeVeque celebrated the first Mass in the fall of 1963. The new church at Wickford Way was built in 1980 and dedicated by Bishop Matthew H. Clark on Oct. 31, 1982. In 2013, the parish completed an extensive renovation project, which included expansion of the narthex and installation of a Parsons organ.

St. Joseph Church in Penfield was founded in 1860 as the “church on the hill,” serving German Catholic immigrants. It operated as a mission until becoming an independent parish in 1914. A fire in 1947 damaged the original church, and Masses were held at the town hall using an altar from St. Louis Church in Pittsford. A decade later, a temporary building and four classrooms were erected on Penfield Road. The adjacent St. Joseph School, which continues in operation, was built three years later. A parish rectory, convent, school addition and a new permanent church at 43 Gebhart Road were added in 1967. The temporary church was converted into a parish hall. Then-Father James M. Moynihan was St. Joseph’s pastor from 1976-92, shortly before Pope John Paul II named him ninth bishop of the neighboring Diocese of Syracuse in 1995. Bishop Emeritus Moynihan died March 6, 2017.

Established as a mission of Fairport’s Church of the Assumption when the Diocese of Rochester was inaugurated in 1868, the St. Louis community celebrated Masses in a rented hall above Tousey Market on South Main and Church streets in Pittsford, until a small house on State Street in the village was purchased. Bishop Bernard J. McQuaid and Father John Codyre dedicated the cornerstone for a new church in 1884. St. Louis became a parish in 1911, and its first pastor was Father Louis Edelman. The historic Hargous-Briggs house on South Main Street was the first home of St. Louis School, which opened its doors to more than 100 students in 1950. A new school was built five years later, and construction of a new church began in 1956. It was dedicated May 21, 1958.

To alleviate crowding at Holy Trinity and St. Rita churches in Webster, Bishop Fulton J. Sheen established Webster’s St. Paul Church in 1967. Sweet’s Farm, a restaurant/party house on Holt Road, served as the first worship space for the community. In the late 1960s, the Kamienski family donated land at 783 Hard Road to be used as a permanent site for St. Paul Church. In May 1970, Father John T. Walsh, the parish’s first pastor, celebrated the first Mass in the edifice, which was designed and constructed by parishioners. On the occasion of its 25th anniversary, the parish underwent a $1.5 million renovation project, which included relocating the sanctuary. The parish celebrated its 50th anniversary in June 2017 with a Mass with Bishop Salvatore R. Matano presiding.

According to parish lore, the parish was named St. Rita of Cascia, patron saint of the impossible, because the first Mass in the new church was celebrated in September 1950, just 10 months after the Diocese of Rochester purchased the 23 acres of West Webster farmland on which it was constructed. Founding pastor Father Francis Kleehammer initially had celebrated Mass in the former St. Margaret Mary Church in Irondequoit, which had built a new church. With permission, the former St. Margaret Mary Church was disassembled, rebuilt on the newly purchased land at 1008 Maple Drive and renamed St. Rita Church. St. Rita School opened in 1955 and continues to serve students in grades prekindergarten through fifth grade. A new church was built in 1982, and the first Mass in that worship space was celebrated in 1984. A new parish center built in the mid-1990s connects the back of the church to the back of the school, which remains in operation.

Church of the Transfiguration

The feast of the Transfiguration in 1983 was the occasion for the first Mass celebrated — in an old barn at the corner of Stone Road and Clover Street — by the community of Church of the Transfiguration in Pittsford. When the weather grew too cold for worshipping in the barn, Masses were celebrated at a movie theater in Eastview Mall and at Christ Clarion Presbyterian Church on Thornell Road. The parish built its first church, at 50 West Bloomfield Road, in 1984 and it was dedicated on May 5, 1985. As the parish community continued to grow, a larger church was needed, and Bishop Matthew H. Clark dedicated the new worship site on Dec. 19, 1992.
Copyright © 2023 Rochester Catholic Press Association, Inc. All rights reserved. Linking is encouraged, but republishing or redistributing, including by framing or similar means, without the publisher's prior written permission is prohibited.