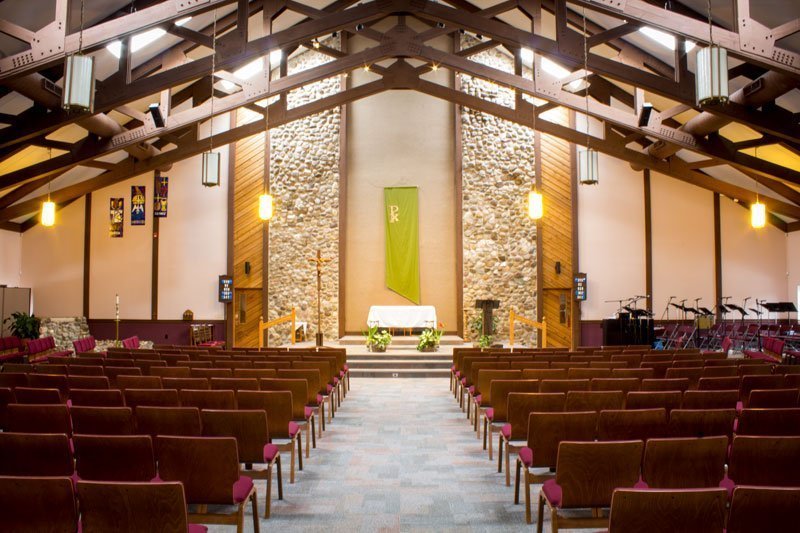 The churches of Good Shepherd and Guardian Angels in Henrietta, and St. Joseph in Rush became a cluster in June 2010. Two years later, they came together as a single parish under the name St. Marianne Cope.
‚Ä¢ The history of St. Joseph Church dates back to the early 1860s. Father Joseph O’Donohue of Scottsville found a home in Rush for $500, which was remodeled into St. Joseph Church and dedicated in 1864. Bishop Bernard J. McQuaid laid the cornerstone for the new church on July 18, 1881. During the pastorate of Father Martin Cluney, an enlarged Victorian Gothic structure was built in 1902-03. The church was most recently renovated in 1987-88.
‚Ä¢ Msgr. Thomas Connor celebrated the first Mass at Good Shepherd Church on July 16, 1911. The original church seated 240 people. A 700-seat basement chapel was added to the parish in 1964.
‚Ä¢ As more people moved into the Henrietta area in the 1960s, a second church, Guardian Angels was established under the pastorate of Father John B. Kleinjes. Bishop James E. Kearney blessed the new church on May 26, 1963.

Nativity of the Blessed Virgin Mary

Nativity of the Blessed Virgin Mary Church originally served Irish immigrants, with early Masses celebrated at the Brockport village hall beginning in 1848. The original church building was completed in 1855. The current building at 152 Main St. was dedicated in 1927 and served a large portion of the surrounding towns. The area served by the single parish in its early years includes the Newman Community at SUNY Brockport and St. Elizabeth Ann Seton Church, which were founded in 1968 and 1982, respectively. Nativity also is home to one of the oldest diocesan Hispanic migrant ministries, which began in the 1970s. A Sunday afternoon Mass celebrated in Spanish continues to this day. In the early 2000s, the church also formed a cluster with several area churches to become the Northwest Monroe County Catholic Community.

Parishioners’ homes and the North Chili Medical Building served as sites for the first Masses of St. Christopher Church in the late 1960s. Construction of the church began in November 1969 and was completed more than a year later. Bishop Joseph L. Hogan celebrated the first Mass on Jan. 30, 1971, and dedicated the building six months later. A parish center annex was completed in May 1978 and became home for the parish’s faith-formation and social activities. The parish, located at 3350 Union St., is part of the Five Saints West Pastoral Planning Group and is planning a 50th-anniversary celebration in 2018.

St. Columba/St. Patrick in Caledonia, St. Vincent de Paul in Churchville and St. Mary of the Assumption in Scottsville came together as St. Martin de Porres Parish on July 1, 2017, after operating as a cluster since 2011.
‚Ä¢ St. Mary of the Assumption was founded in 1843 by Irish immigrants looking to establish a Catholic church in Wheatland and the southeastern area of Chili. The cornerstone of the church building was laid by Bishop John Timon of the Diocese of Buffalo on Aug. 15, 1853.
‚Ä¢ Also in 1853, pastor James McGlew decided there should be a church for Catholics in the Mumford and Caledonia areas. St. Patrick Church, a mission of St. Mary of the Assumption Church, was built in 1854.
‚Ä¢ In 1869, Father Michael Purcell of St. Patrick’s Cathedral purchased a home and lot in Churchville and turned it into St. Vincent de Paul Church. Fire destroyed the building a year later, and a new structure was constructed on North Main Street in 1885.
‚Ä¢ Also in 1885, the cornerstone was laid for St. Columbkill Church in Caledonia, a mission of St. Mary of the Assumption Church. It became an independent parish in 1889, and St. Patrick Church was designated as its mission church. The parish’s name was changed to the Latin version of the patron’s name — St. Columba — in 1913. St. Patrick Church closed in 1992 and St. Columba became the primary worship site for the parish, then known as St. Columba/St. Patrick.

To help serve increasing numbers of Catholics in Brockport, Hilton and Kendall, St. Elizabeth Ann Seton Parish was formed on Feb. 10, 1982. Before construction began in 1987 on the worship facility at 3747 Brick Schoolhouse Road, Hamlin, the congregation celebrated Mass in a barn and an old train depot. The first Mass at the construction site was celebrated in a rainstorm in September in conjunction with “The Rock Party,” when more than 20 parishioners delivered more than 200 tons of stones and rocks. The sanctuary wall made from parishioners’ stones became a symbol of the spirit that characterized the parish. Bishop Matthew H. Clark blessed the church on Oct. 14, 1989, and it was dedicated on Aug. 9, 1992.

Spencerport’s Catholics built a small chapel in 1857 and 10 years later founded St. John the Evangelist. That year the faith community outgrew the modest chapel and laid the cornerstone for a new church. The second church housed the parish until 1915, when parishioners again began building to accommodate the growing community. Many parishioners contributed field stones from their farms to the construction effort. The first Mass was celebrated in the new church in 1915. The parish added an outdoor shrine to the Blessed Mother to the church grounds in 1984.

Parishioners first gathered for Mass in the Greece Town Hall on Aug. 30, 1959. But the space was too small to accommodate the congregation, so liturgies moved to the basement of Ridgecrest Shopping Center. In October 1959, ground was broken for St. Lawrence’s first church, largely designed by the parish’s first pastor, Father Edward A. Shamon. The first Mass in the church was celebrated on Oct. 30, 1960. Father John Murphy became pastor in 1962 and oversaw the completion of a parish hall and establishment of St. Lawrence School, which continues to serve preschool and through fifth grade. A new church was dedicated by Bishop Matthew H. Clark in 1989, and an attached parish center, named Deacon Hall in honor of St. Lawrence, who was a deacon, was completed in 2006.

For more than 130 years, St. Leo in Hilton has been the Catholic presence in the Hilton-Parma area and is now home to more than 1,200 registered parish families. The parish began in 1884 as a mission of St. John the Evangelist Church in Spencerport. On June 11, 1946, Bishop James E. Kearney established St. Leo as a parish in its own right and appointed Father John L. Maxwell, a former U.S. Navy chaplain, as its first pastor. The parish’s new building at 167 Lake Ave. in Hilton was completed in 1966, and the first Mass was celebrated on July 3. The former church was converted into a community and parish meeting center.

St. Mark in Greece began as the lakefront Star of the Sea Chapel on Edgemere Drive, built in 1910 to serve Catholic families vacationing on Lake Ontario in the summer. The chapel was placed under the supervision of the pastor at Greece’s Our Mother of Sorrows Parish. By the 1960s, the summer homes along the lake were becoming year-round residences, and Bishop James E. Kearney decided it was time for a new parish and a larger church. In 1964 St. Mark moved from Edgemere Drive to a new worship site at 54 Kuhn Road. Founding pastor Father Joseph Donovan walked the beach talking to people about the new church. In 1993, the parish built a new church, parish offices and a new priests’ residence, which were dedicated by Bishop Matthew H. Clark.
Copyright © 2023 Rochester Catholic Press Association, Inc. All rights reserved. Linking is encouraged, but republishing or redistributing, including by framing or similar means, without the publisher's prior written permission is prohibited.