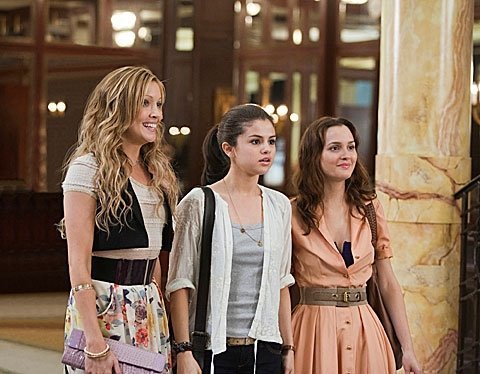 NEW YORK (CNS) — "Monte Carlo" (Fox) is the flimsiest of teen-girl romantic fantasies based on the sturdiest of ancient tropes, the mistaken-identity plot.

While Selena Gomez, the Disney Channel star at the heart of this overly long but inoffensive enterprise, is no comedic actor, her devoted fans are unlikely to notice.

Director Thomas Bezucha, who co-wrote with April Blair and Maria Maggenti, wisely supports Gomez — in the central role of recent high school grad Grace — with Katie Cassidy as pal Emma and Leighton Meester as stepsister Meg — then sets the trio loose on misadventures in Paris as well as in the principality of the title.

The three girls from a small town in Texas have scrimped and saved for their dream vacation in the City of Light, which, predictably enough, turns out to be the stereotypical low-budget nightmare compounded of bad hotels and a breathless sprint through the sights.

Accidentally separated from their tour at the Eiffel Tower, the friends are drying out from a rainstorm at the nearest luxury hotel when they discover that Grace is a dead ringer for one of the upscale hostelry’s current guests, British socialite Cordelia Winthrop Scott (Gomez again, with an accent that slides around like her lip gloss).

The ingenues abroad have only to walk out the door again for this resemblance to launch them on Cordelia’s intended trip to Monte Carlo, where an expensive necklace is to be auctioned off for the benefit a school for impoverished children in Romania.

Doing the right thing early on would, of course, kill the plot and the opportunities to stay in a roomy hotel suite, dress up, meet handsome fellows, loll on the beach, and all that good stuff. The girls know there’s a moral quandary involved, but it’s such a fun time — and for such a fine cause as well.

"It’s stealing!" Meg reflects out loud. "It’s seizing the moment," Grace replies. And that’s about as profound as the ethical debate ever becomes.

On the plus side, the soundtrack includes Louis Armstrong singing all the lyrics to the Edith Piaf classic "La Vie en Rose," to the lush strains of which we stroll toward the happiest of happy wrap-ups.

The film contains some mild sensuality. The Catholic News Service classification is A-II — adults and adolescents. The Motion Picture Association of America rating is PG — parental guidance suggested. Some material may not be suitable for children.