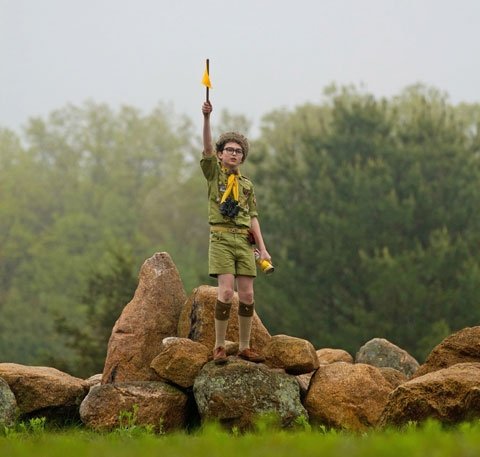 NEW YORK (CNS) — Director Wes Anderson’s films aren’t meant to be either easily understood or likable. So it’s no surprise that the pretentious, deadpan whimsicality of "Moonrise Kingdom" (Focus) overwhelms its core story of adults trying to do the best for two troubled preteens.

Set in a supposedly more innocent, intricately detailed and stylized 1965, the film follows the travails of 12-year-olds Sam (Jared Gilman) and Suzy (Kara Hayward) on fictitious Penzance Island, off the coast of New England.

Sam is a foster child and the least popular but most skilled, member of his troop of Khaki Scouts (a fictional stand-in for the Boy Scouts of America). He runs away from their encampment because he’s fallen in love with Suzy, the gloomy daughter of Walt and Laura Bishop (Bill Murray and Frances McDormand).

The pair finds their haven on a strip of beach Sam dubs Moonrise Kingdom. As one would expect, their connection is more emotional than sexual. So a scene of the two of them slow-dancing in their underwear and exchanging a tentative kiss is meant to be an ironic riff on the highly sexualized atmosphere of the 1980 film "The Blue Lagoon."

Audience members who don’t get that reference may feel a bit queasy. The interlude doesn’t quite cross over into the full-blown exploitation of children, but it teeters on that edge.

Ben’s Scouting pals eventually decide to help the couple, and there’s a very odd and droll "wedding" in an interdenominational Scout chapel, even though it’s made clear that the ceremony is in no way legal.

Anderson, who co-wrote the film with Roman Coppola, portrays most of the adults as caring and sensitive, if occasionally clueless. When Sam’s foster parents don’t want him returned to them even if he’s found, police chief Captain Sharp (Bruce Willis) and Scout Master Ward (Edward Norton) do their best to keep Sam from the horrific possibility of being sent to a state institution.

Laura and Captain Sharp have been having an affair, but this is indicated only in some very stale dialogue, and the ramifications of their relationship are not explored.

The soundtrack makes extensive use of Benjamin Britten’s wonderful children’s opera "Noye’s Fludde" ("Noah’s Flood") as well as some other Britten melodies, which together set a refined mood. But Anderson and Coppola’s script then spoils the whole effect with an over-the-top plot development.

The film contains an instance of underage sensuality, a reference to an extramarital affair and fleeting crass language. The Catholic News Service classification is A-III — adults. The Motion Picture Association of America rating is PG-13 — parents strongly cautioned. Some material may be inappropriate for children under 13.