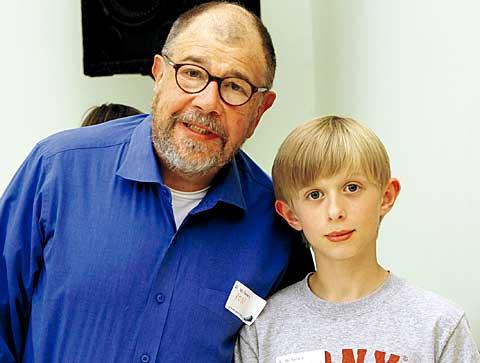 Ron Herzman of Geneseo recalled the advice he got from Catholic Charities of Livingston County as he volunteered to be a mentor through the HOPE Youth Mentoring program.

"Your job is just to hang out," he recalled someone telling him. "Be there and be a presence."

Although it may have been a switch for this SUNY Geneseo English professor who spends his days teaching, he said he has purposefully avoided pushing his own interests — including Dante and Medieval literature — upon his mentee, Christopher Beyer, who was 8 when they met more than four years ago.

"Little by little, we broke the ice and he began to trust me," Herzman said. "I found he was not the kind of person who was expressive about many things. You had to wait for things to develop."

Herzman said over the past four years, he has learned that Christopher is very talented with computers and eager to help others. He said he also has seen Christopher’s grades climb to honor-student levels.

Herzman said he became a mentor with Catholic Charities of Livingston County’s HOPE Youth Mentoring program upon the urging of his wife, who mentored with the program and told him that organizers needed more positive male role models. Livingston County mentors with HOPE — which stands for Helping One Person Excel — are matched in a one-to-one relationship with girls and boys ages 6 to 14. The youths in the program are identified by local agencies, organizations and schools as children who could benefit from a positive relationship outside of their family.

The program was started in 1997, said Susan Bell, program director and assistant executive director of Catholic Charities of Livingston County. She said the program runs year-round and always needs more adult mentors who can commit to four hours of activities a month. Although mentors must commit to at least a year, the mentoring relationship can continue on even longer, Bell said.

"We have five matches that have gone beyond seven years," she said.

Volunteers must be able to relate to kids; be at least 21 years old, although there is no upper age limit; be willing to go through screening and background checks; and be willing to participate in a three-hour training session covering the program’s policies and possible scenarios that could arise. Optional mentor gatherings about five times a year provide ongoing support to mentors.

"They have our home phone numbers if something arises and they don’t know what to do; they can always call us at home," Bell said.

"We do a lot of social, recreational activities, and we encourage them (program participants) very strongly to do a service project each year," Bell said.

Mentor pairs have helped at charity fundraisers, including at a car wash that raises money for the mentoring program, Christmas caroling at an area nursing home and assisting other nonprofits at events. Mentor and mentee pairs have taken part in recreation activities at Camp Stella Maris, participated in an outrigger canoe race and a fishing derby, and attended a Buffalo Bills game, among other activities.

The program seeks donations of tickets to entertainment, recreational and sporting events to reduce the costs of activities for the volunteer mentors, who pay for all activities for themselves and their mentees out of their own pockets.

"We try to get (mentors) as many freebies as we can," Bell said.

Herzman said he learned by trial and error what activities interested Christopher. Giving out candy at Halloween to hundreds of trick-or-treaters in Geneseo was a hit, while going to Buffalo Bills training camp wasn’t as interesting, he noted.

Being a mentor requires patience and long-term investments, but the rewards are great, Herzman said. Christopher has begun to develop his potential, while Herzman has developed a true friend.

"I have somebody I like to be with, and the longer I’m with him, the more meaningful it is to me to be with a person who is a part of my life," he said.