More than 1,000 missionaries of mercy will serve during jubilee - Catholic Courier 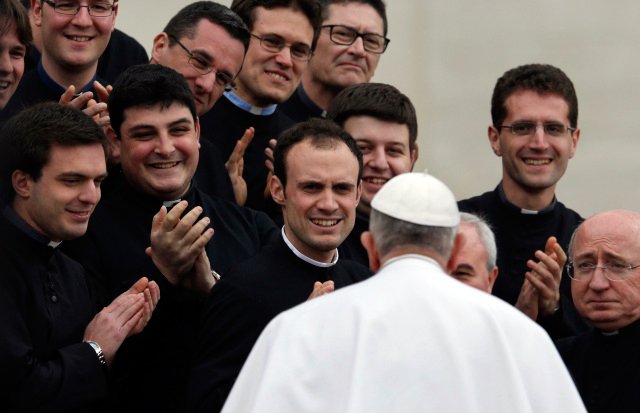 VATICAN CITY (CNS) — More than 1,000 "missionaries of mercy" from all over the world will receive a special mandate from Pope Francis to preach and teach about God’s mercy, said Archbishop Rino Fisichella.

About 700 of the missionaries who were chosen by Pope Francis will be in Rome to receive their special mandate in person during an Ash Wednesday ceremony in St. Peter’s Basilica Feb. 10, said the president of the Pontifical Council for Promoting New Evangelization, the office organizing events for the Year of Mercy.

For the holy year, which runs until Nov. 20, Pope Francis said he would designate "missionaries of mercy" to be unique signs of God’s mercy. He is also giving them special authority to pardon sins that carry penalties that only the Holy See can lift.

During a news conference at the Vatican Jan. 29, Archbishop Fisichella said there had been a huge response from priests and religious men who — with permission from their bishops or superiors — requested to serve as these special missionaries.

The original plan was to have just 800 missionaries, however, the number of requests was so great, 1071 men ended up being chosen, Archbishop Fisichella said. The missionaries will serve in their own dioceses, but they may be invited by other bishops to visit other dioceses as well.

The pontifical council will send out to all the world’s bishops a list of the names and personal contact information of all the missionaries appointed by the pope, the archbishop said.

It will then be up to an individual bishop to reach out to a missionary on the list to invite him to his diocese, as well as cover expenses and provide what may be needed for his stay, the archbishop said.

"It is only the pope who nominates these missionaries, not the bishops, and it is he who entrusts them with the mandate to announce the beauty of the mercy of God while being humble and wise confessors who possess a great capacity to forgive those who approach the confessional," the archbishop said.

Those who wanted to serve as special missionaries, but were not chosen, are encouraged to "work as witnesses of mercy in their own daily missions, in the parishes, institutes, and other communities where they offer their service with love," the council said on its website, www.im.va.

The appointed missionaries were invited to Rome for a special meeting with the pope Feb. 9. They were to receive their papal mandate the next day during a ceremony in St. Peter’s Square in the presence of the relics of Sts. Padre Pio and Leopold Mandic — both Capuchin priests who spent 14 hours or more a day hearing people’s confessions.

It will be the first time their relics come to Rome, Archbishop Fisichella said. The relics were to be brought to St. Peter’s Basilica by procession Feb. 5 and remain in the central nave in front the Altar of the Confession until Feb. 11.

The pope requested their relics be exposed for veneration in the basilica, according to jubilee organizers, to be a sign for the missionaries of how God welcomes those who seek forgiveness.