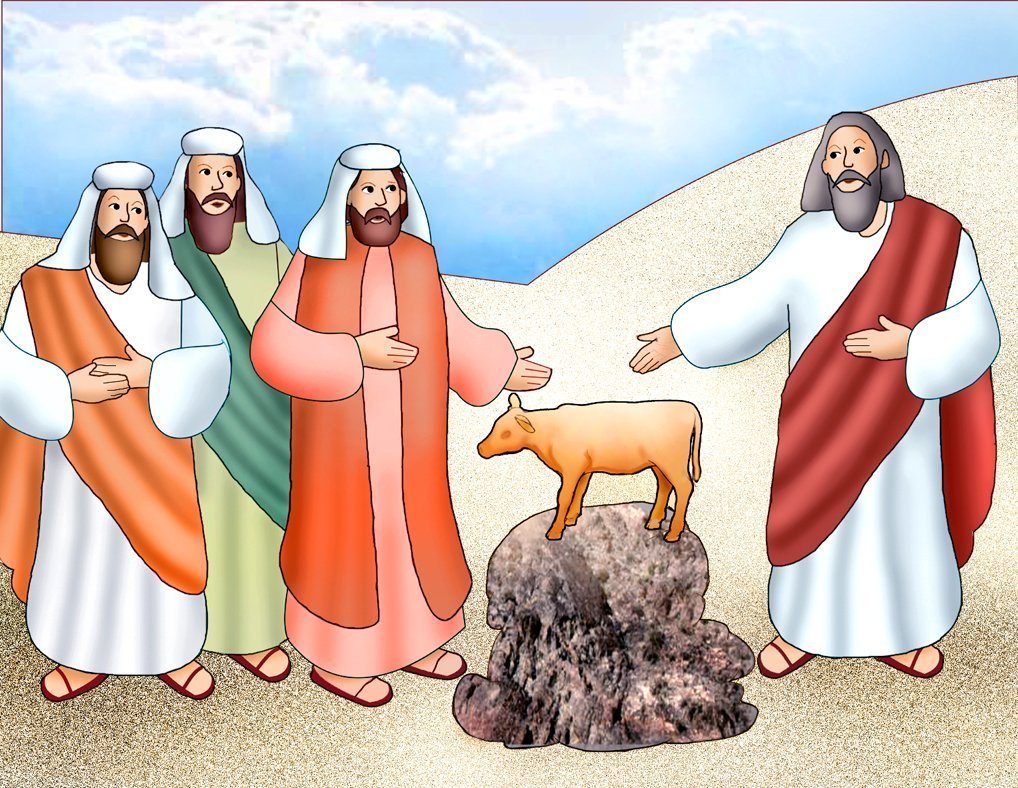 Moses had been on top of Mount Sinai for a long time, and the Israelites became impatient waiting for him. They went to Aaron, Moses’ brother with a demand. “Come, make us a god who will be our leader; as for the man Moses who brought us out of the land of Egypt, we do not know what has happened to him.”

And Aaron answered, “Have your wives and sons and daughters take off the golden earrings they are wearing and bring them to me.” So the people collected all of their gold and put it in containers. Then they brought everything to Aaron. He melted down the gold and made a golden calf out of it.

When the Israelites saw he golden image, they proclaimed, “This is your God, O Israel, who brought you out of the land of Egypt.” Then Aaron announced, “Tomorrow is a feast day of the Lord,” and the people celebrated the next day, beginning early in the morning.While all this was happening, Moses was still on Mount Sinai. He was with God, who said to him, “Go down at once to your people, whom you brought out of the land of Egypt, for they have become depraved. They have soon turned aside from the way I pointed out to them, making for themselves a molten calf and worshipping it. … Let me alone, then, that my wrath may blaze up against them to consume them. Then I will make of you a great nation.”

In spite of what his people may have done to anger the Lord, Moses did not want to see them destroyed. Moses said, “Why, O Lord, should your wrath blaze up against your own people, whom you brought out of the land of Egypt with such great power and with so strong a hand? “

Moses was not sure he had convinced God to spare Israel, so he said, “Let your blazing wrath die down; relent in punishing your people. Remember your servants Abraham, Isaac and Israel, and how you swore to them by your own self, saying, ‘I will make your descendants as numerous as the stars in the sky; and all this land that I promised, I will give your descendants as their perpetual heritage.’”

The Lord listened to Moses, and he agree not to destroy Israel for what they had done.

READ MORE ABOUT IT:
Exodus 32

Q&A
1.What was Moses doing on Mount Sinai?
2. What did Israel do to anger God?

Most of Egypt was uninhabitable desert at the time of Moses. Most Egyptians lived or worked in the region of the Nile, one of the longest rivers in the world. Even in the summer, when many smaller rivers trickled down or would completely dry up, the Nile River flowed freely. In this place, the pharaohs and high officials lived in luxury, most Egyptian people worked in the fields or as construction workers and the people of Israel lived as if they were slaves. After several pleas from Moses to let the Israelites go free, Pharaoh refused. God finally sent 10 plagues upon Egypt, which forced Pharaoh to let Moses and his people free. Even so, he sent his army to kill them, but God kept the Israelites safe and Pharaoh’s army was destroyed instead. The Israelites wandered for 40 years until they reached Canaan, the land of their own that God had promised them.

Peter Claver (1581-1654) demonstrated that he was a gifted student of academics and religion. He graduated with honors from the University of Barcelona in Spain and entered the Jesuit order. He served as a missionary to Colombia while completing his studies, and he returned to Cartagena where he became an ordained priest in 1615. Cartagena was a major port for the shipment and sale of slaves from Angola and the Congo.

Peter joined other missionaries in trying to minister to the slaves, as much as they were allowed by the slave traders. He tried to give them food and medicine, and he often prayed with them and tried to offer some of them the sacrament of baptism, and he would listen to their confessions. When he was an old man, Peter became very sick, to the point of being unable to leave his bed.

After he died, word of his work among slaves and other unfortunate people spread around the world. We honor him on Sept. 9