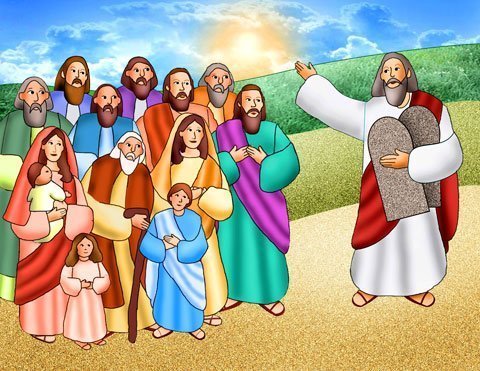 Moses had called the people of Israel together so that he could give them the laws and regulations that God wanted them to follow. He said, “Hear, O Israel, the statutes and ordinances which I proclaim in your hearing this day, that you may learn them and take care to observe them.”

Moses reminded the people how God had guided them out of the slavery of Egypt and how they had wandered through the desert. Life was difficult, and sometimes the people complained or thought God had abandoned them, but they said to Moses, “You go closer and listen to all that the Lord, our God, will say, and then tell us what the Lord, our God, tells you; we will listen and obey.”

When Moses repeated this to the Lord, he said, “Would that they might always be of such a mind, to fear me and to keep all of my commandments! Then they and their descendants would prosper forever.”

The Lord told Moses to let the people of Israel know that if they obeyed him, “He will love and bless and multiply you. … You will be blessed above all peoples.” Moses told the people that whenever God tested them, he always rewarded them when they were faithful to him. “Remember how for these forty years the Lord, your God, has directed all your journeying in the wilderness, so as to test you by affliction, to know what was in your heart: to keep his commandments, or not.”

Moses gave the Israelites specific examples of how the Lord had cared for them. “He therefore let you be afflicted with hunger, and then fed you with manna, a food unknown to your ancestors, so you might know that it is not by bread alone that people live, but by all that comes forth from the mouth of the Lord.”

Moses wanted the people to always remember that all of the blessings they had received had come from the Lord. He did not want to become proud or to forget the Lord, who had brought them out of Egypt, guided them through the wilderness, provided food and water, and kept them safe.

READ MORE ABOUT IT:
Deuteronomy 5-8

Q&A
1. How long had the Israelites wandered in the wilderness?
2. What did God provide when the people were hungry?

Moses is one of the most important figures of the Old Testament. Although he had been raised as if he were the son of Pharaoh’s daughter, God called him to lead the Israelite nation out of the slavery of Egypt and into the freedom of the promised land. Moses brought the Ten Commandments down from the mountain. When Moses was not able to give Pharaoh the warning messages from God, God allowed Aaron, the brother of Moses, to speak for him. Moses was even seen in the New Testament at the transfiguration of Jesus.

Bartholomew was born in Northumbria, England, and was one of several men religious who followed the example set by St. Cuthbert to live as hermits on the island of Farne. He is most likely of Scandinavian heritage, and he had a strong desire to travel and explore. He went to Norway, where he became a priest. When Bartholomew arrived at Farne, he found another hermit was already in the place he wanted to live, and the man tried to chase him away. The other hermit eventually left, and Bartholomew had the home he wanted. After being offended by another monk, Bartholomew left the island, but he returned a year later and reconciled with the monk. Bartholomew left a legacy of a holy life and several miracles. He died in 1193, and we honor him on June 24. 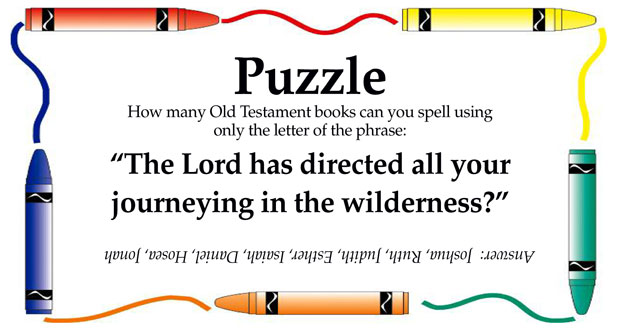