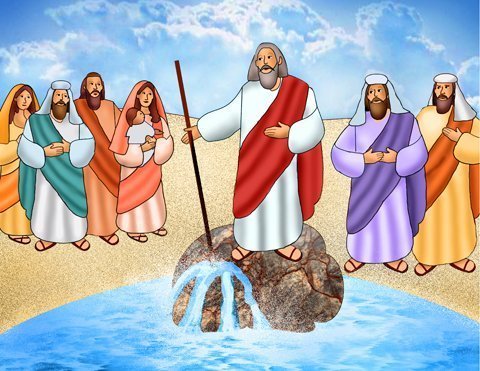 After the Lord had led them safely out of the land of Egypt, the people of Israel wandered in the wilderness for many years, knowing that one day they would reach the land that God had promised would be theirs. Along the way were many hardships. When they reached the Red Sea, they thought they would not be able to cross it, but the Lord parted the waters and they crossed on dry land. When food was scarce, God sent manna from heaven and quail for them to eat.

When they reached an area called the wilderness of Sin, the Israelites made a camp in a place called Rephidim, as the Lord had directed them. But there was a problem with the campsite that upset the people. There was no fresh water. They went to Moses and said, “Give us water to drink.”

Moses answered, “Why do you quarrel with me? Why do you put the Lord to a test?”

But the people did quarrel with Moses. They said, “Why then did you bring us up out of Egypt? To have us die of thirst with our children and our livestock?”

Moses went before the Lord with the complaints that had been brought to him. “What shall I do with this people?” he asked. “A little more and they will stone me!”

The Lord gave an answer to Moses. “Go on ahead of the people, and take along with you some of the elders of Israel, holding in your hand, as you go, the staff with which you struck the Nile. I will be standing there in front of you on the rock in Horeb.”

Moses obeyed the Lord. He brought his staff with him. This was the same staff that Moses used to demonstrate the power of God to Pharaoh. When Moses touched the water of the Nile River with it, the water turned to blood, the fish in it died and the water became unfit to drink.

When Moses and the tribal elders who were with him reached the rock at Horeb, Moses raised the staff and struck the rock with it. Immediately the rock broke open and fresh water flowed out from it. Because this was a place where the people of Israel quarreled with the Lord and tested him, by asking, “Is the Lord in our midst or not?” it was called Massah and Meribah, words which meant to quarrel and to test.

READ MORE ABOUT IT:
Exodus 17

Q&A
1. Why did the people complain to Moses at the camp?
2. What happened when Moses struck the rock?

An exodus is a leaving or moving of a large number of people. The exodus of the Bible is the story of how God led the people of Israel out of the slavery of Egypt into the promised land of Canaan. God appeared to Moses in a burning bush and said that he had heard the prayers and complaints of his people, and that he had chosen Moses to be their leader. Moses went before Pharaoh and asked for the Israelites to be set free. Pharaoh refused, so God sent several plagues on Egypt until Pharaoh finally let the Israelites go. The next 40 years were filled with both hardships and miracles until the people of Israel finally reached Canaan. The story continues in the Book of Joshua, named for the man who was given the responsibility of leading the people into Canaan after the death of Moses.

Guy of Pomposa (d. 1046) always dressed very well, because he believed that would be pleasing to his parents. During a celebration of the feast of St Apollinaris, he realized this was a form of vanity, so he decided to change his attitude toward himself in an attempt to improve his life spiritually. He gave his fine clothing to the poor and began to wear the clothes of a poor man. He then spent three years under the spiritual guidance of a hermit, and this time of learning led to him being a member and later abbot of a monastery that was under the direction of the hermit. Guy spent many hours a day alone, praying and fasting. The monks under him admired him, and his example of holiness inspired many men to join the monastery. We honor him on March 31.