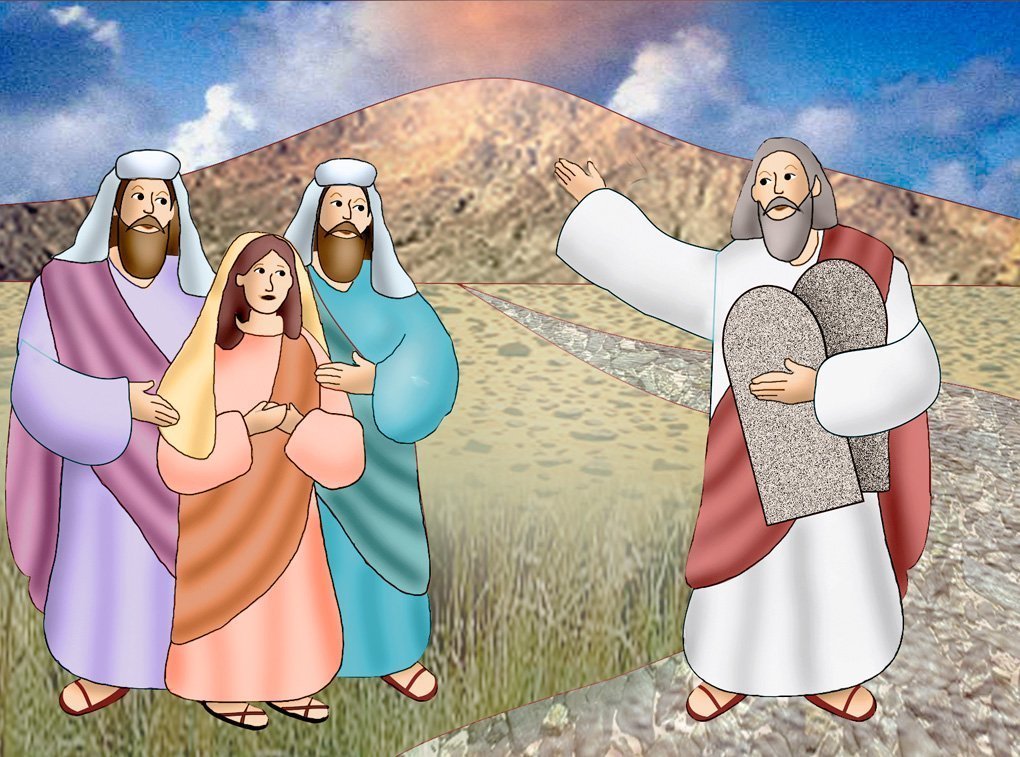 After reading the Ten Commandments from God to the people, Moses set down the stone tablets on which the words were written. Behind him the mountain bellowed smoke and the sky was filled with loud, crashing thunder and blinding flashes of lightning. The Israelites were afraid and backed away from Moses.

“You speak to us,” they said to Moses, “and we will listen; but let not God speak to us, or we shall die.”

“Do not be afraid,” Moses told them, “for God has come to you only to test you and put his fear upon you, lest you should sin.” Moses continued to tell Israel of the laws that God wants them to follow. Some of the laws were harsh with punishment while others expected the people to treat each other fairly. Most important of all was the commandment to serve only God.

Moses declared, “Whoever sacrifices to any god, except to the Lord alone, shall be doomed.”

Reminding them of their own escape from slavery, Moses said, “You shall not molest or oppress an alien, for you were once aliens yourselves in the land of Egypt. You shall not wrong any widow or orphan. If ever you wrong them and they cry out to me, I will surely hear their cry. My wrath will flare up, and I will kill you with the sword; then your own wives will be widows, and your children orphans.”

To illustrate his next point, Moses pulled money out of his cloak and held it up for the people to see. “If you lend money to one of your poor neighbors among my people, you shall not act like an extortioner toward him by demanding interest from him. If you take your neighbor’s cloak as a pledge, you shall return it to him before sunset; for this cloak of his is the only covering he has for his body. What else has he to sleep in? If he cries out to me, I will hear him; for I am compassionate.”

Moses put his money away and pointed into the sky. Then he spoke slowly. “You shall not revile God, nor curse a prince of your people. You shall not delay the offering of your harvest and your press. … You shall be men sacred to me.”

The name of the Book of Exodus comes from Exodos, a Greek word that literally means “road out.” The Israelites departed or escaped from the slavery they had endured in Egypt. After a brief summary of the family history of Jacob and a description of the political situation in Egypt, the real action of the book begins with the birth of Moses. He was adopted by Pharaoh’s own daughter and was raised as if he were a prince. But God had greater plans for him. He had chosen Moses to defy Pharaoh and to lead the Israelites to the promised land. This book reads like a thriller, with miraculous events — from the parting of the Red Sea to food falling from heaven — and daring escapes. This also is where God gave Moses the Ten Commandments.

Alphonsus Rodriguez (1533-1617) was the son of a wealthy wool merchant in Spain. When two traveling Jesuits stayed with the Rodriguez family, they helped Alphonsus to prepare for his first Communion. When he was in his teens, he and his brother were sent to study with the Jesuits again. After the death of his father, Alphonsus had to leave his studies to help with the family business. Alphonsus married, but illness claimed the lives of his wife and his two children. He sold his business and went to live with two of his older unmarried sisters. They taught him about the rosary and meditative prayer. He was inspired to join the Jesuits, but because of his age and his own poor health he had to accept a position as lay-brother. He dedicated the rest of his life to prayer and the service of others, and eventually he was made a full brother. We honor him on Oct. 30.