Moses urges the Jews to obey the Lord - Catholic Courier 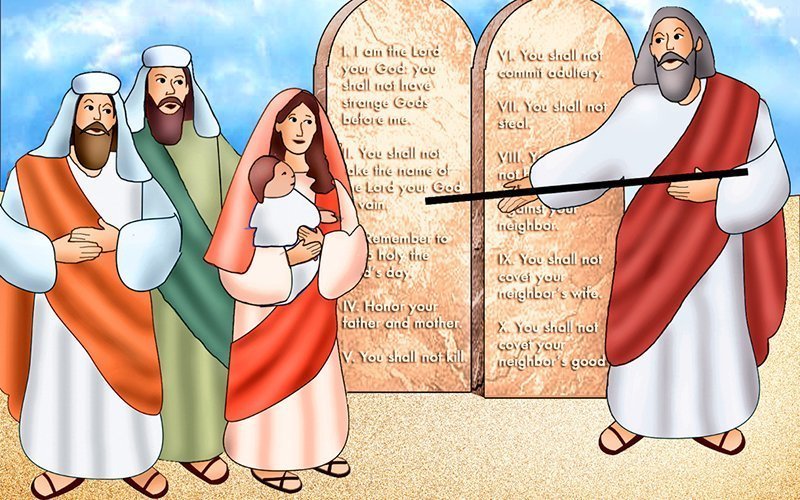 Moses urges the Jews to obey the Lord

Moses urges the Jews to obey the Jews

Moses paused and looked out into the desert. He had been leading the people of Israel for many years, ever since God delivered them from the slavery of Egypt. Now all of the people had gathered in front of him to hear God’s commandments. Moses did not like to speak in front of people, but that was what God wanted him to do, and he did it.

Moses wanted the people to understand that in order to receive God’s blessings, they must do what he asked them to do. That was not always an easy lesson to explain to people who were becoming restless and longed for a country of their own to live in. Moses continued.

Moses thought it might be helpful if he spoke simply to the people he loved.

He did not want them to think he was telling giving them puzzles that they had to try to solve. “For this command which I enjoin on you today is not too mysterious and remote for you. … No, it is something very near to you, already in your mouths and in your hearts; you have only to carry it out.” Moses could see the people were listening, but he could not tell if they understood what he was trying to say. He had told them of God’s love, but he had also told them of God’s anger if they turned away from him. Moses tried again.

“Here, then, I have today set before you life and prosperity, death and doom. If you obey the commandments of the Lord, your God, which I enjoin on you today, loving him, and walking in his ways, and keeping his commandments, statutes and decrees, you will live and grow numerous, and the Lord, your God, will bless you in the land you are entering to occupy.”

READ MORE ABOUT IT:
Deuteronomy 30

Q&A
1. Who was Moses speaking to?
2. What would God do if the people obeyed him?

Deuteronomy is the fifth book of the Old Testament, but it means “second law.” It is not a new law, but a more thorough explanation of the laws God had already given to his people through Moses. Sometimes he pleads with Israel to listen to God, sometimes he corrects them like a parent and sometimes he appeals to their sense of devotion to God.

The period of time that is recounted is believed to be toward the end of the 40 years the Israelites spent wandering in the desert until just before they entered the promised land of Canaan.

Although Deuteronomy is not as well know to us as Genesis or Exodus, Jesus quoted from this book when he was tempted by the devil in the desert (Matthew 4) and when he explained to the lawyer which of the commandments is most important (Matthew 22).

Maria Goretti (1890-1902) was the daughter of a simple Italian farm worker. When her father died of malaria, Maria and her five brothers and sisters had to help their mother so that they would not starve. In spite of all this hardship, Maria remained cheerful and optimistic.

One afternoon in 1902, Maria was attacked by a young man who tried to choke her and he stabbed her in the back with a sharp knife. As she lay on her death bed, Maria expressed concern for her family’s welfare, and she spoke of only forgiveness of her attacker.

Maria died the following day and the man who killed her spent almost 30 years in prison.

Maria was revered for her gentle and forgiving spirit. At the time of her canonization in 1950, her murderer was still alive.

We remember her on July 6.