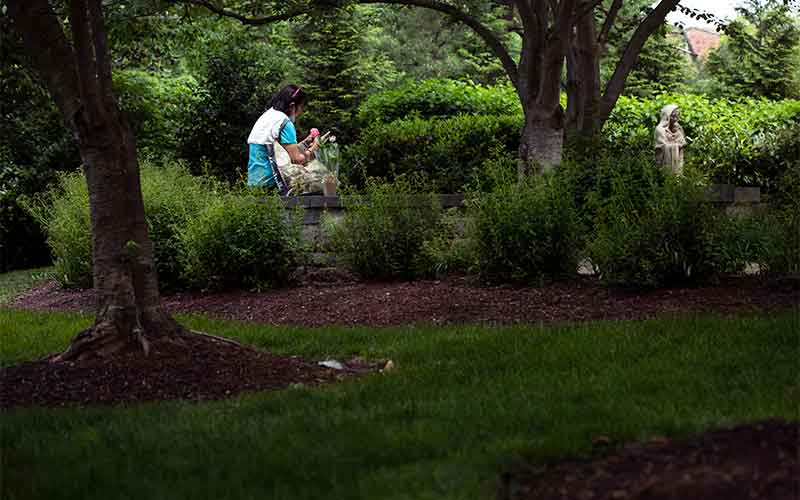 A woman is seen at Mary's Garden near the Basilica of the National Shrine of the Immaculate Conception in Washington May 17, 2021. On Mother's Day, we can turn to Mary for inspiration and solace. (CNS photo by Tyler Orsburn)

The humility of motherhood

Every year on Mother’s Day, I make my way into my garden, dig my hands into the soil and begin to plant the flowers that I have so carefully chosen in anticipation of this day.

It’s a practice that I began with my own mom years ago, as her present for Mother’s Day. Since she passed, and now that I live in my parents’ old home, I have continued the tradition as a way to remain close to her.

For me, working in the garden is a spiritual practice. Being in such close connection with the earth seems to bring me closer to the one who created it all. Within my garden, though, there are two particular areas that always seem to speak to me as a mother.

The first place is the area around the statue of Mary that is nestled in the corner of the yard. It always seems especially significant on Mother’s Day, since I have so often turned to her for inspiration and solace throughout my own parenting journey of more than 20 years. During those years, I have often thought about Mary outside of the Bible stories that we have all heard.

I think about how she would have felt or reacted in certain situations. I wonder if she and Jesus ever butted heads the way that most moms and kids do at times. Or how did she handle it when Jesus stepped away from her to begin his own journey?

When my two oldest kids moved out of state, I prayed to her for insight and comfort. Surely, she knew what it was like to watch your kid walk away from you and out onto his or her own.

Then, I make my way to another corner of the yard to where my St. Francis bird feeder is located. St. Francis’ outstretched hand holds a dish from which the birds can gain nourishment. Around the base, I place flowers that I hope will attract other living creatures, such as bees and butterflies.

As I do so, I find myself thinking not so much about St. Francis, but rather about his mother, Pica. We don’t know a lot about her, but the fact that she was Francis’ mom is all I need to know.

Given her son’s story — stealing cloth from his father, stripping off his clothes in the town square — surely, she heard the townspeople talking about her son and questioning his actions. It was a situation that at one point or another all of us moms can relate to when our kids do something that makes us question what we did wrong in raising them.

Having the perspective of knowing the full story of Francis, we can now look at those events as part of his bigger story. But, at the time, his mother just saw her son behaving in a way completely foreign to his upbringing. I wonder if she felt like somehow his actions were a reflection on her motherhood.

And, for some reason, knowing that brings me comfort. My faith is bolstered knowing that I am not alone in my struggles and questioning how well I’m raising my kids.

Our faith holds the saints up as inspirations of holiness. And while it is true that they serve as examples of devout faith, sometimes it is hard for me to find a connection.

But one place I can always relate to them is through their mothers. When I hear the stories of saints, I put myself in the shoes of the women who bore them and raised them. I ask myself, “What was their story? What did they think?”

Those are the women who bolster my faith. And though many of them may not be well known, I know that there is a bond that connects them to me — mother to mother.