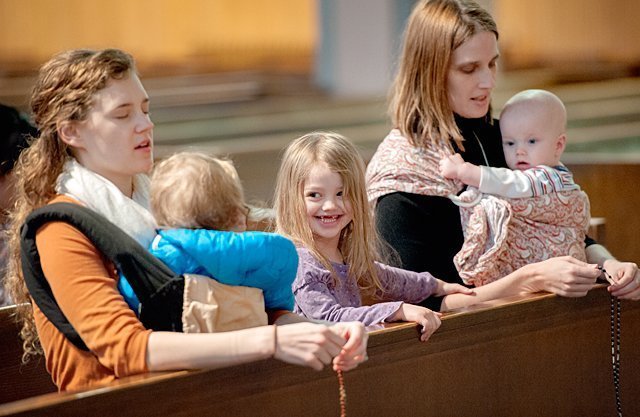 Although moms will be in the spotlight with Mother’s Day, May 8, Jiza Zito knows that motherhood can often be an isolating experience.

Having three young children limits her social activity, as does frequent relocating due to her husband’s military duties. So, after moving to Ithaca last summer with her family, Zito sought to enhance connections with other mothers.

The result was Catholic Moms of Ithaca, a ministry at Immaculate Conception Parish that is coordinated by Zito and provides support in the vocation of motherhood. Participants began meeting during Advent and have continued getting together weekly, with two groups currently being offered: one for mothers of young children, and another for moms of tweens and teens that’s open to fathers as well.

Zito said she got the idea to pursue formation of a mothers’ group after researching parish newsletters and discovering that one had previously existed at Immaculate Conception.

"It was really important for me because as a mother, I feel I need that support and encouragement from other mothers when days are hard," said Zito, whose husband, Mark, serves as a lieutenant in the United States Navy and is currently studying at Cornell University. Their children are Sonny, who will turn 6 on May 14; Kateri, 3; and Tripp, 2. 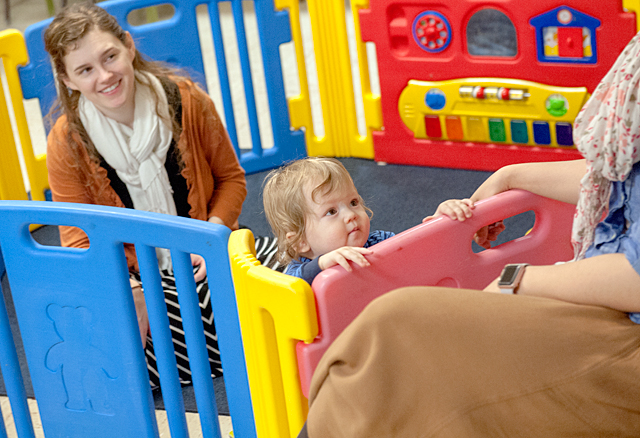 Anna Harwood (left) and her 1-year-old son Thomas spend time with other moms and children during a March 23 meeting of the Catholic Moms of Ithaca Pray & Play group at Immaculate Conception Church.

Zito emphasized that Catholic Moms of Ithaca is open to any and all moms.

"There’s definitely a wide demographic of moms in the parish," Zito said. "Some work, some stay home, some homeschool, some have high-schoolers and some, like me, have newborns to preschoolers."

The Pray and Play Group meets on Wednesdays in the parish hall beginning at 9:30 a.m., with mothers bringing their children. Women start out with rosary recitation followed by study and discussion. During Lent participants focused on videos from Catholic Conference 4 Moms, and during Advent they studied Cardinal Timothy M. Dolan’s "Come, Lord Jesus" reflections. Also included in the Wednesday meetings are Scripture readings and prayers for various intentions.

Meanwhile, the parent group gathers on Sundays at Immaculate Conception School from 11:45 a.m. to 1 p.m. while older children are attending youth group. Their parents engage in prayer, activities and discussion about Catholic parenting and family life, particularly in relation to modern culture.

"There are so many societal pressures and influences toward secularism on our youth. It is important for us to band together as parents to encourage and support one another in helping our teens retain their faith," said Allison DeGuzman, a regular Sunday participant.

"Attending this group also sends a very important message to our children. They see us making our Catholic faith a priority," observed Brigid Cooper, who coordinates the Sunday group. 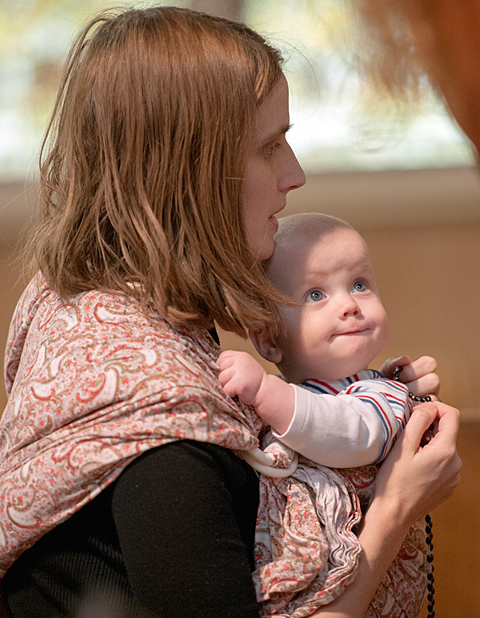 Angela Mack holds her 7-month-old son Henry while praying the rosary during a meeting of the Catholic Moms of Ithaca Pray & Play group at Ithaca’s Immaculate Conception Church March 23.

Zito said Catholic Moms of Ithaca is eyeing several additional activities in the months ahead such as family rosary dinners, coffee hours, picnics, pilgrimages and retreats, and service events. She noted, for instance, that she and two other group members attended the Rochester Catholic Women’s Conference held March 12 in Rochester.

Zito added that the ministry is looking to expand its offerings beyond Immaculate Conception to other parts of Tompkins County. With two dads already attending the Sunday meetings, she said the possibility is ripe for a fathers’ group to form as well.

"It’s been very positive, for sure," Zito remarked about Catholic Moms of Ithaca. "It’s something I keep hearing people have wanted and we needed this for the parish — the community, the fellowship among mothers."

She said one of the group’s goals is to create strong enough bonds so that members feel they can contact each other anytime, perhaps through a phone call or visit.

"It’s easy to isolate yourself when you’re in the trenches of motherhood," Zito said. "Women take a lot on, and it’s nice to have the friendships that can help balance that out and keep you grounded, feeling like you’re not alone."