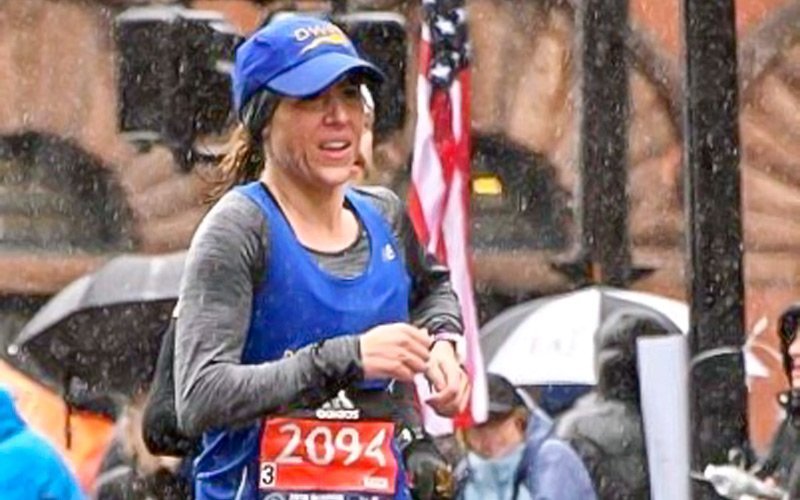 As the early afternoon of April 16 wore on, two native Mount Morris Catholics were enduring different kinds of distress.

Jessica Chichester faced the physical strain of running the 26.2-mile Boston Marathon in rain, cold and wind. Four hundred miles to the west, her brother, Tim, was anxiously checking updates on his phone — in between teaching duties — that showed Jessica hanging tough with the leaders’ times.

“My heart was racing,” Tim recalled. “I was so excited for her, I was shaking all over.”

Tim had a vested interest not only because this was his sister, but he’s Jessica’s running coach as well. He also knows the feeling of being near the top at the Boston Marathon, having placed an unexpected 11th overall there in 2012.

This time, it was Jessica who pulled off a shocker. She logged a time of 2 hours, 45 minutes and 23 seconds, good for fifth place in the women’s division. She bested nearly all the 12,063 females who started the race, coming in as the top amateur. Jessica eclipsed her personal course record by some 20 minutes — it was her fourth Boston Marathon — and previous best time in any marathon by eight minutes.

Jessica said that late in the Boston race, she knew she was on pace for her target time of 2:45 yet struggling with increasing exhaustion. She recalled that her only thoughts were “to put one foot in front of the other and finish as hard as I could.”

She did finish strongly, yet Jessica didn’t initially realize just how high up she had placed. (The top women’s time of 2:39:54 was run by Desiree Linden of Michigan.) Rather, when the race ended she was so cold, wet and tired that “I couldn’t even comprehend what was going on. I was more concerned with getting back to the hotel and showering.”

“I definitely didn’t see a place of fifth. I’m still kind of in disbelief,” she added.

Her showing even caught race organizers by surprise. She initially was deemed ineligible for prize money because of her amateur status, but on May 3 the Boston Athletic Association announced it was making an exception in order to acknowledge unusually strong runs by several amateurs. Jessica wound up receiving $15,000.

Jessica said that preparation for her epic — and lucrative — run was enhanced by daily communication with Tim, who has coached her since last fall. “Definitely, having him as my coach has helped a ton,” she said, adding that she was eager to make a big splash in Boston as a sign of her recovery from a stress fracture last year.

Her star performance came six years after Tim finished 11th at the Boston Marathon out of 22,426 men and women with a time of 2:21.10. Since then, he has placed 15th in the New York City Marathon in 2015 and reached the U.S. Olympic qualifiers in 2016. Tim said he plans to try qualifying for the 2020 Summer Olympics in Tokyo — as does Jessica, based on her showing in Boston.

“This gives me a push to take things a lot more seriously,” she said.

Although they both had solid high-school running careers at Mount Morris Central, as well as in college — Jessica at the University of Albany, Tim at SUNY Geneseo — marathon running has elevated them to a national level. The Chichesters explained that because of the extreme rigors of marathon racing and training, most marathoners don’t begin competing in such races until after college. They added that marathon runners tend to peak in their 30s, a fact that right now bodes well for the Chichesters: Jessica’s 32nd birthday is June 3, and Tim will turn 30 on July 7.

Currently, Jessica is a nurse practitioner with Prominis Medical Services in Brooklyn, and Tim is a high-school science teacher and assistant track coach at Arkport Central as well as assistant cross-country coach at Alfred University. While growing up in Mount Morris, the siblings were altar servers and youth-group members at St. Patrick Church — a faith community of St. Luke the Evangelist Parish — where their parents, Sue and Bill, are still active. They are second cousins of Jeff Chichester, also from St. Patrick, who will be ordained to the diocesan priesthood June 2.

“I think it’s awesome,” Jessica said of the support that she and Tim still receive from folks in the Livingston County village. “I love how people back home get so excited about it.”

Perhaps no one was more stoked about her run in Boston than her own brother.