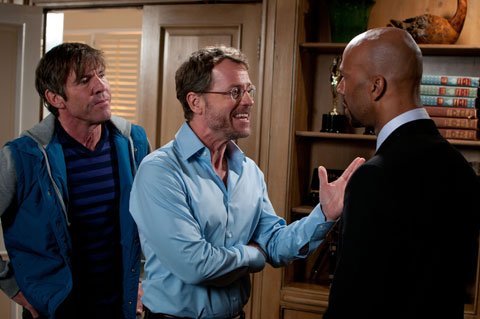 The skits are framed by the story of a madman named Charlie Wessler (Dennis Quaid) who’s trying to pitch his perverse script ideas to Hollywood studio executive Griffin Schraeder (Greg Kinnear). Schraeder quickly reacts with outrage, only to have Wessler draw a gun and hold him prisoner while Wessler’s twisted tales continue to fill the screen.

A detailed description of the incidents imagined by this Scheherazade of slime would itself constitute an exercise in tastelessness. Suffice it to say that an ensemble of directors too numerous to list — 10 in all — labor vainly to draw humor from subjects like incest, menstruation, aberrant sexual desires and abortion.

There’s even an updated version of Fritz the Cat, a cartoon feline called Beezel whose same-sex attraction to his owner, Anson (Josh Duhamel), is, as it turns out, mutual — much to the consternation of Anson’s live-in girlfriend Amy (Elizabeth Banks).

Inexplicably, stars from Hugh Jackman and Kate Winslet to Emma Stone and Richard Gere — not to mention the familiar figures credited, if that’s the right word, above — seem to have flocked to this queasy project. Moviegoers can go them one better by staying away from it.