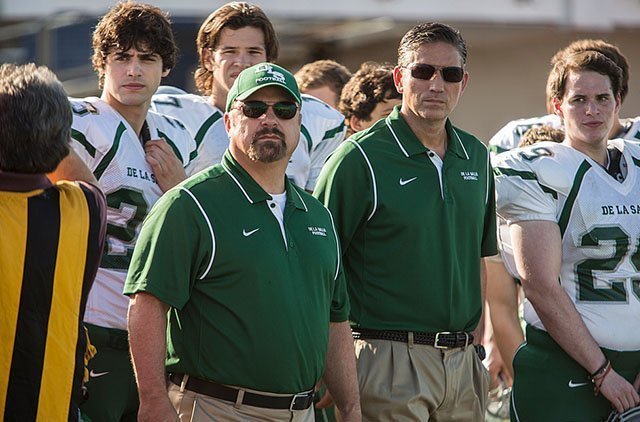 Actors Michael Chiklis, left, and Jim Caviezel portray De La Salle High School football coaches in the movie "When the Game Stands Tall." The film is about a Catholic high school and the record-setting winning streak of its football team.

OAKLAND, Calif. (CNS) — This is how a movie gets made.

"I found the book in the Santa Monica High School football team locker room when I was cleaning it," said David Zelon, who in addition to being the father of a football player, is executive vice president at Mandalay Entertainment Group.

In spring 2009, in a place that "smells of testosterone and sweat," he found what would become his latest film project.

Upon meeting with its author Neil Hayes, Zelon learned there was an even more amazing story, one that the original book didn’t recount. Get a copy of the paperback, Hayes told him.

It was in that story that Zelon, who produced the inspirational movie, "Soul Surfer," found the heart of the narrative of the Ladouceur film, which opens in theaters Aug. 22.

In what Zelon described as a "perfect storm," Zelon, the father of a high school star — who would play four years at Harvard, on teams that won two Ivy League championships — found a story that spoke to him. And, he hopes, to many more.

De La Salle High School would run that winning streak to 151 games, over a dozen years, before losing. But the story told in "When the Game Stands Tall" is much bigger than wins and losses. Ladouceur not only coached football at De La Salle, but also taught religion.

"Coach Carter" recounted the story of the Richmond (California) High School coach who took his team off the court until the student-athletes’ grades improved.

In casting the lead role of Ladouceur, Zelon said he was "looking for somebody who worked on multiple levels."

Jim Caviezel was the name that "floated to the top," Zelon told The Catholic Voice, Oakland’s diocesan newspaper. "He checked all the boxes."

Caviezel may be best known for his portrayal of Jesus in Mel Gibson’s "The Passion of the Christ" in 2004.

Zelon and Carter flew to New York to meet with the actor, who took them to a concert with him.

"We went out and saw Johnny Mathis," Zelon recalled. "Johnny Mathis gave this amazing concert. His voice was like an angel. We shared this creative experience together. We bonded together."

Zelon found Ladouceur to be an interesting character. "He doesn’t have to preach," he said. "He just does it. He lives it. He walks the talk."

Caviezel echoed that sentiment about "Lad" being a man of few words.

"Here’s a guy in a room and he’s not saying much. He’s looking at his coaches. He knows they’re capable of doing what they do. He lets them coach. But his presence is felt," he told the Oakland paper in a separate interview.

What he read in the script "had great redemption in it," Caviezel added. He spoke to the paper in Charlotte, North Carolina, where the film was screened for attendees at the Catholic Media Conference in mid-June.

From his own time on the basketball court in high school and knowing some top coaches over the years, Caviezel said he has seen firsthand how turning boys into men, working on the qualities of the inner self and "sacrifice, brotherhood, commitment … are so essential in having a strong team."

"Winning is just a byproduct of working on that inner self. It’s the heart," he added.

Zelon told The Catholic Voice the De La Salle athletes also earned his respect. About a year after he had acquired the rights to the book, Zelon and screenwriter Scott Marshall Smith went to a De La Salle football game.

"One of the things that impressed me about this team immensely was something that happened in the locker room after the game. They were playing a team, and were beating them. They were up 35-0 at the half. Lad said, ‘Seniors, you’re done for the night.’"

Afterward, Zelon overheard some talk around the lockers — it was eight of the juniors discussing their effort that night, including the fact they "only scored 14 points in the whole second half."

Bottom line, he said, the players decided that they had to do better, recommit themselves to the team and take on additional practice and preparation.

"There was not an adult in sight," Zelon said. "They were having a conversation you would pray that kids would have on their own. They had learned their lessons so well, they had embraced the De La Salle concept so well. We stood there with our mouths opened. I was so impressed by that."

Zelon is hoping that moviegoers will be inspired by Ladouceur.

"This story was honed and built over 30 years; three decades of work went into formulating a program that turned out great young men," Zelon said. Perhaps others might want to understand the roots of success, not just on the field, but in helping boys become men."

Jurich is a staff writer at The Catholic Voice, newspaper of the Oakland Diocese.