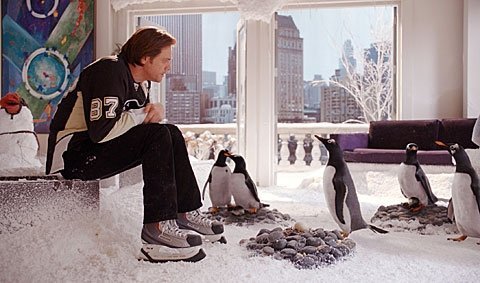 NEW YORK (CNS) — Have you ever wondered, in your idle moments, what it might be like to keep six pet penguins in a swanky New York City apartment? Well, of course you have.

Thankfully, the long-overdue answer to that burning question is provided by the routine, but generally kid-friendly comedy "Mr. Popper’s Penguins" (Fox).

The birds in question arrive on the high-rise doorstep of work-obsessed Manhattan real estate developer Tom Popper (Jim Carrey) by way of a bequest from his recently deceased father, a world traveler and arctic explorer.

As the opening scenes have shown us, Popper senior was not tops as a pop, and his neglectful ways have carried forward to the next generation resulting in the breakup of Tom’s marriage to ex-wife Amanda (Carla Gugino) and frayed ties to teen daughter Janie (Madeline Carroll) and young son Billy (Maxwell Perry Cotton).

Initially, Tom regards his unasked-for new companions as nothing but a nuisance — one of the funnier sequences concerns his vain efforts to identify some part of the Gotham bureaucracy willing to take them off his hands — and their antics threaten a vital deal he has going to purchase the Central Park landmark Tavern on the Green from its matriarchal owner Mrs. Van Gundy (Angela Lansbury).

But, this being Hollywood, Tom eventually bonds with the unruly creatures and they foster a change in his outlook. (Another enjoyable moment: The as-yet-unreformed Tom wakes up after a weekend of boredom away from the office to declare: "Monday, thank God!")

Though gooey with guano, director Mark Waters’ loose adaptation of Richard and Florence Atwater’s Newbery Honor book from 1938 is otherwise unproblematic. And its hopeful theme of marital reconciliation between Tom and Amanda — a potential reunion egged on, of course, by their youngsters — will gratify viewers committed to scriptural values.

A stray, thoroughly out-of-place mention of Viagra, which may represent a misguided attempt to keep parents amused, is of course less welcome. But, that fleeting element in Sean Anders, John Morris and Jared Stern’s script aside, "Mr. Popper’s Penguins" registers as a mostly pleasant distraction for undemanding tots.

The film contains several scatological sight gags, a single adult reference and at least one mild oath. The Catholic News Service classification is A-I — general patronage. The Motion Picture Association of America rating is PG — parental guidance suggested. Some material may not be suitable for children.